Democracy survey reveals conflicting viewpoints among Jewish and Arab Israelis, with majority of Jews saying they should not have greater rights than Arabs.

Some 65% of Arab-Israelis are proud to be Israeli, a new poll found, compared to only 49.8% last year. The Israeli Democracy Index, a public opinion project conducted by the Guttman Center for Surveys and the Israel Democratic Institute, released the results of an extensive survey this week which assessed the quality of Israeli of democracy in 2014.

In the Jewish-Israeli population 85.5% of the population said they felt a sense of pride to be part of the nation – a slight rise from the 83.3% of Jewish-Israelis who felt proud to be Israeli in 2013. 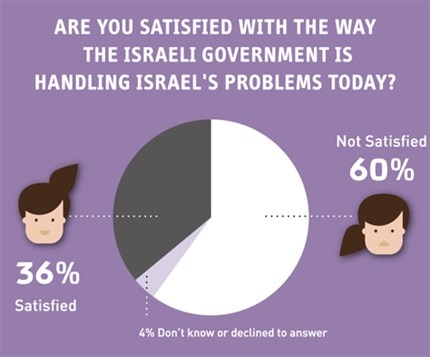 Other interesting findings unveiled by the survey, which polled a representative sample of the population (1,000 participants), were that 60% of the population are not satisfied with the way the government is handling the nation’s problems.

According to the index, only about a quarter of the population placed equal value in both the “Jewish” and “Democratic” nature of the state. The finding is especially relevant when taking in mind the contentious Nationality Bill that was initiated by Prime Minister Netanyahu that attempted to enshrine the Jewish and democratic nature of the country in law and caused so much upheaval that it was one of the determining factors that led to the dissolving of the Knesset and early elections. 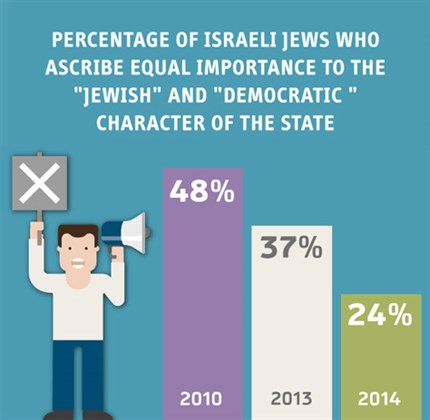 Another major issue that arose after the announcement of early elections was the staggering level of poverty evident in the Jewish state. The Israeli Democracy Index study found that 54.5% of the population perceives tension to be high between the rich and poor and Israel – only tension between Jews and Arabs was seen by the public as higher (58%).

Meanwhile, 63% of Jewish-Israelis do not believe that Jews should have greater rights than Arabs while, on the other hand, 74% of Israeli Jews think decisions about peace and security should be decided by a Jewish majority, according to the study’s findings. 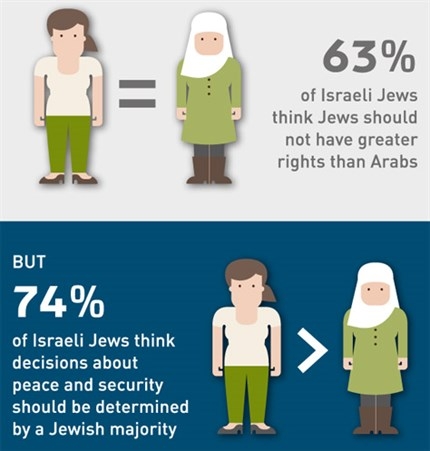 Social and economic unrest was also unveiled through an examination of the study’s findings with 60% of Israelis having little or no trust in Israel’s banks and the Finance Ministry and 65% of Israelis believing the social protest of the price of living should be renewed.

Jewish and Arab Israeli’s also seemed to disagree as to what issues the next government should tackle first – 41% of Jewish-Israelis thought that social and economic goals should be the first priority while 39% of Arab Israelis believed that security and foreign policy and social/economic goals were equally important.

While the study shows that Israelis harbor criticism of governmental institutions, one interesting finding unveiled that 46% of Israelis think harsh, public criticism of Israel should be forbidden.

In terms of world rankings, Israel is in the top third of international rankings for gender equality and satisfaction with life. On the other hand, it is in the bottom third of rankings when it pertains to civil liberties, civic engagement and political stability.