Hundreds of Israelis flocked to the home of the French Ambassador to Israel Patrick Maisonnave Thursday to express their solidarity with the French people after an attack on the satirical weekly Charlie Hebdo left 12 people dead. 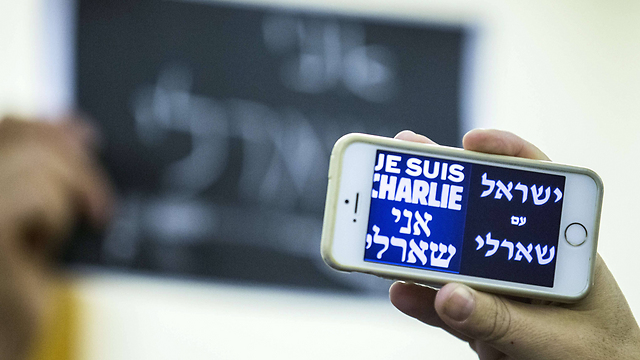 Many of those in attendance were French born Israelis, but all held up signs reading "I am Charlie" in either French – " Ju Suis Charlie " – or Hebrew – "אני שארלי" (Ani Charlie) - a slogan that went viral on social media within hours of Wednesday's terror attack, to express their solidarity in face of the massacre. 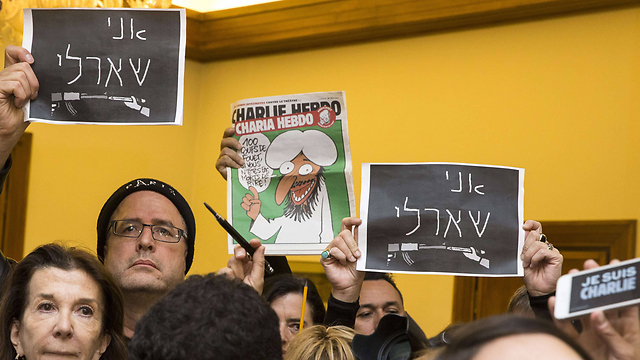 "I am Charlie" "אני שארלי" (Photo: AFP)
"We felt the need to come here because we share a common fate. The terror that hits Paris is the same terror that hits Tel Aviv," one of those attending said. Ambassador Maisonnave hosted former Israeli president Shimon Peres and the two held a memorial for the victims, which also included a Jewish-Algerian cartoonist Georges Wolinski. 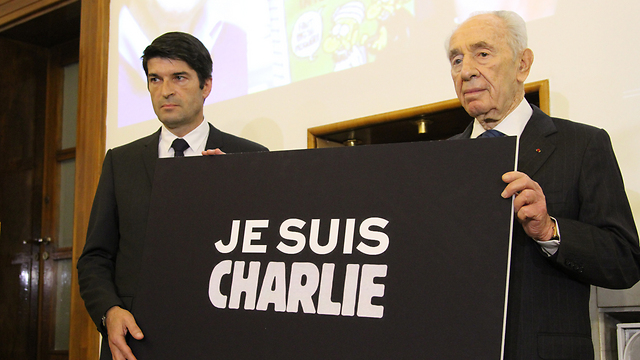 Peres with Ambassador Maisonnave (Photo: French Embassy Israel)
"Twelve men and women were brutally murdered. With a heavy heart I send by condolences to the victims' families, they are the victims of a historical struggle against barbarism and terror. I know your hears are still bleeding, but I am confident that freedom will win, that France will win," Peres said. 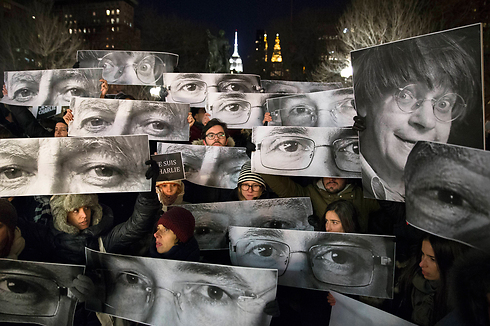 Photo: AP
From Berlin to Bangkok, tens of thousands took part in such events: Viewing the Paris killings as a cold-blooded assault on democracy, people from all walks of life - journalists and police officers, politicians and students - turned out in cities around the world Thursday, holding up pens and joining hands in an outpouring of silent solidarity.

European capitals including Madrid, London and Brussels and cities in the US saw large demonstrations and candlelit vigils late Wednesday. More rallies were held Thursday from Sarajevo to Athens, where some formed a line and held up a letter each spelling out in Greek: "I do not hate, I am not afraid." 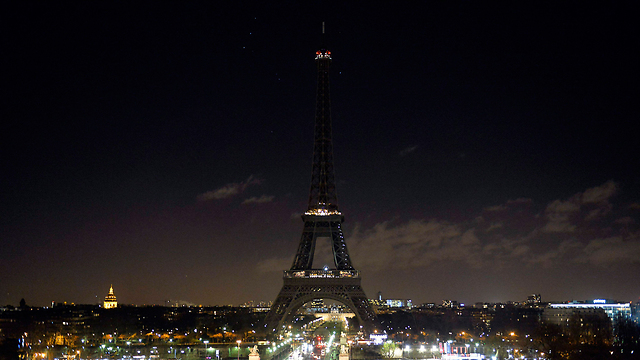 In Tunisia, the birthplace of one of the slain Jewish cartoonists Wolinski, dozens paid homage to Charlie Hebdo in a candlelight vigil outside the French ambassador's residence.

"These people were executed at point-blank range just because of drawings - drawings that didn't please everyone and provoked anger and controversy but still were just drawings," said journalist Marouen Achouri. In Prague, visitors to the National Theater and elsewhere were being asked to mark a minute of silence before each performance Thursday to honor the victims. In Italy, seven general managers and artistic directors of Milan's major theaters and orchestras, including La Scala, put out a joint statement defending "all the values that are an achievement of our civilization." Editors at newspapers around the world expressed support by featuring subversive cartoons or reprinting some of the Paris weekly's provocative covers. Dozens declared "We are Charlie Hebdo" on their front pages. The Danish paper Jyllands-Posten, which has faced numerous threats and foiled attacks for publishing caricatures of the Prophet Muhammad in 2005, issued a black front page with a caption that said the free world has a responsibility to protect democracy against "religious frenzy."

Meanwhile, heavily armed anti-terrorism police swooped on woodland villages northeast of Paris on Thursday in a manhunt for two brothers suspected of being the Islamist gunmen behind the attack. 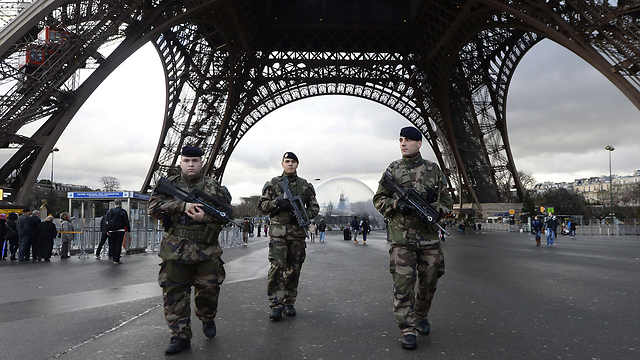 Photo: AFP
About two dozen helmeted and masked officers carried out house-to-house searches in the village of Corcy, a few km (miles) from a service station where police sources said the brothers were sighted in ski masks. Helicopters flew overhead. 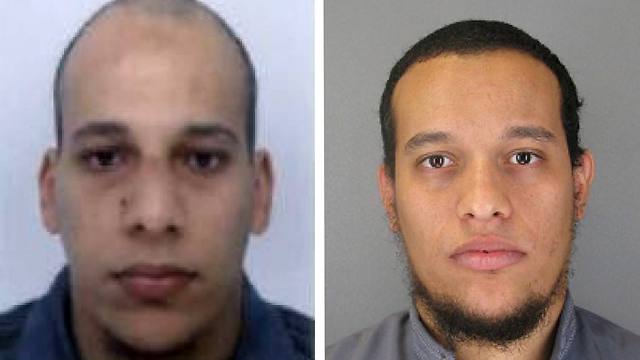 The two fugitive suspects are French-born sons of Algerian-born parents, both in their early 30s, and already under police surveillance. One was jailed for 18 months for trying to travel to Iraq a decade ago to fight as part of an Islamist cell. Officials said they were armed and dangerous.

In Paris, a policewoman was killed in a shootout with a gunman wearing a bulletproof vest. Police sources were unable to say whether that incident was linked to Wednesday's assault at the Charlie Hebdo weekly newspaper, but the authorities opened another terrorism investigation. 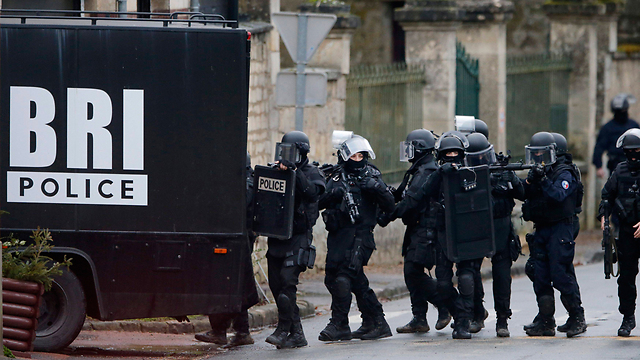 Ninety people have been questioned so far in the investigation and nine people close to the two suspects - Cherif Kouachi, 32, and his 34-year-old brother Said Kouachi - were detained for further questioning, officials said. 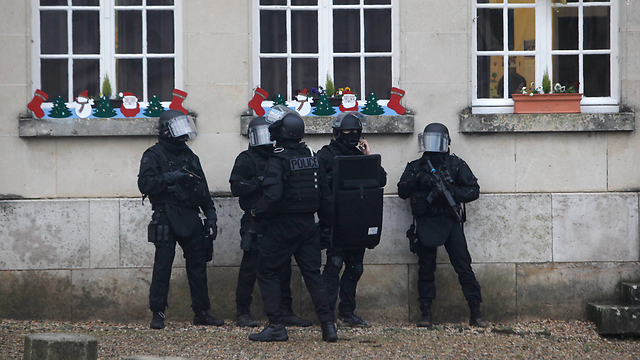 French President Francois Hollande - joined by residents, tourists and Muslim leaders - called for tolerance after the country's worst terrorist attack in decades. At noon, the Paris metro came to a standstill and a crowd fell silent near Notre Dame cathedral to honor Wednesday's victims.

"France has been struck directly in the heart of its capital, in a place where the spirit of liberty - and thus of resistance - breathed freely," Hollande said. 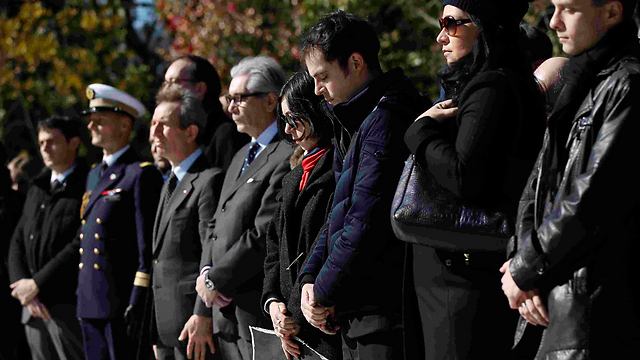 The satirical newspaper Charlie Hebdo had caricatured the Prophet Muhammad and witnesses said the attackers claimed allegiance to al-Qaida in Yemen. Around the world, from Berlin to Bangkok, thousands filled squares and streets, holding up pens to defend freedom of speech and honor those killed in the massacre.