Netanyahu at Paris memorial: 'Radical Islam is an enemy to us all'

"Radical Islam is an enemy to us all," Prime Minister Benjamin Netanyahu said Sunday night at a memorial service held in Paris for the four victims of an attack on a kosher supermarket in eastern Paris on Friday - Yoav Hattab, Yohan Cohen, Philippe Braham and Francois-Michel Saada.

"Today we bow our heads in memory of the victims, as the representatives of a proud nation we stand tall facing evil," Netanyahu said, choosing to speak in Hebrew, as his address was simultaneously translated into French. 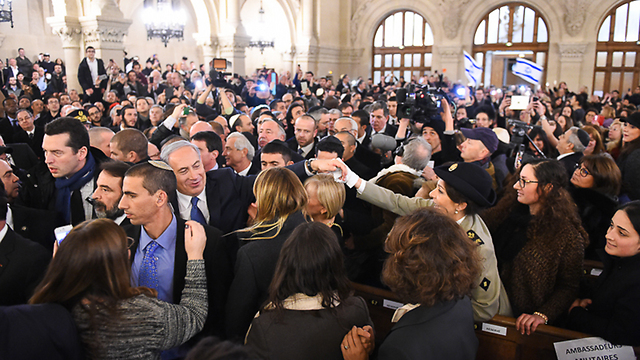 "Here's the truth: Radical Islam is an enemy to us all. This enemy has many names – Islamic State, Hamas, Boko Haram, al-Qaeda, al-Nusra, al-Shabaab, Hezbollah - but they're all branches of the same poisonous tree," he added.

"Even though the factions of radical Islam are fighting amongst themselves, they all want to impose a dark tyranny on the world, to take humanity 1,000 years back. They murder anyone who disagrees with them, especially their Muslim brothers, but their greatest hatred is for Western culture that reveres freedom," Netanyahu continued. 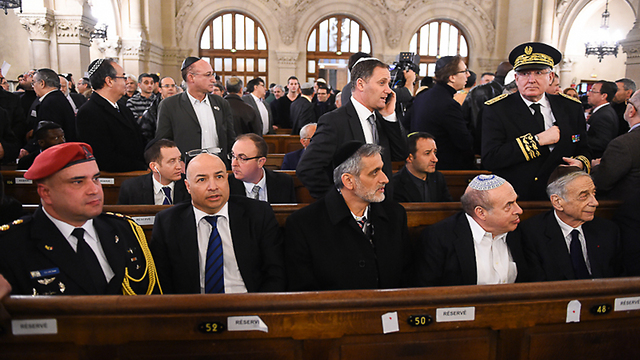 He thanked Lassana Bathily, a Muslim worker at the Hyper Cacher supermarket who saved the lives of six people by hiding them in the store's walk-in freezer. 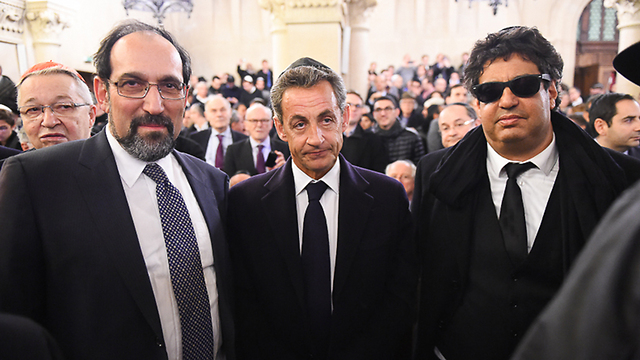 To the Jews of France he said, "I'm telling you what I say to our Jewish brothers in all countries: You have every right to live in safety and in peace as citizens with equal rights anywhere you choose, including here in France. But Jews today have been blessed with another right, a right that didn't exist for previous generations: The right to join their Jewish brothers in our historic homeland - the land of Israel."

The French president and the prime minister were sitting side by side, surrounded by French Prime Minister Manuel Valls and the President of the Central Consistory of France Israelite, Joel Mergui. Foreign Minister Avigdor Lieberman sat a row behind them.

Netanyahu arriving at the ceremony

When the prime minister entered, some members of the audience chanted "Bibi" - Netanyahu's nickname - and "Israel will live, Israel will win," waving the flag of Israel.

"Today France was in the streets, all of France," said Joël Mergui, the head of the Central Consistory of France Israelite. "And the Jews of France were also in the streets to defend freedom of expression, to defend Charlie (Hebdo), to defend our democracy… because the Jewish people are democracy."

Merguri added: "Through our History, the Jewish people, who have always been confronted with hatred, have never hated others ... The synagogue may be the only place of worship where no one has ever supported the hatred for others. The hatred of Jews and the hatred of democracy are the same thing and must be fought in the same way… I no longer want to hear that Jews are afraid. We are not afraid."

The ceremony started with the Adon Olam ("Sovereign of the Universe") prayer and with a selection of verses from Psalms.

Earlier in the day, Netanyahu joined Hollande, other European and Arab leaders and some 1.5 million French citizens in a mass rally in Paris against terrorism and in commemoration of the 17 victims of a series of terror attacks in the French capital last week.