Minister of Religious Services Naftali Bennett announced Tuesday night that the Jewish community of Paris will not have to pay for the burial plots and funerals of the Hyper Cacher victims.

Each of the families of the four Paris kosher market victims, laid to rest Tuesday in Jerusalem, was asked to pay 50,000 shekels to the Chevra Kaddisha for the burial plot and funeral, Ynet was told, after refusing to bury their loves ones in multi-storey tombs.

Following the report, Minister Limor Livnat clarified to Bennett that charging for the services went against the commitments given to her by representatives of the ministry. Late Tuesday night, Bennett and his deputy minister said the ministry would carry the costs of the proceedings.

Chevra Kaddisha, the Jewish burial society subordinate to the Ministry of Religious Services, was to collect payment from the Jewish community of France. The questions over the location and the pricing of the burial plots – for Yoav Hattab, Yohan Cohen, Philippe Braham, and Francois-Michel Saada – developed over the past few days into a dramatic saga. 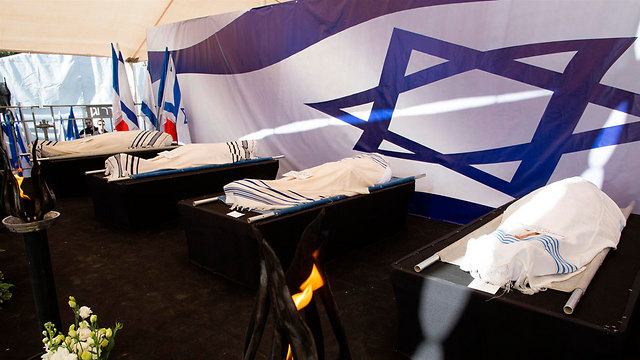 Bodies of four victims in Jerusalem (Photo: Amit Shaabi)
Initially, the families were offered to bury their dearly departed at the Mount of Olives in East Jerusalem, but heightened security tensions dissuaded the families and the government, who took the decision to bury the four at Har HeMenuchot in Givat Shaul, Jerusalem's largest cemetery. Businesswoman Eva Sarfati offered to donate four plots in a private section she owns at the heart of the cemetery. However, the manager of Cheva Kaddisha in Jerusalem, Hillel Horovitz, pressured the Parisian community to refuse the offer, claiming it was illegal. 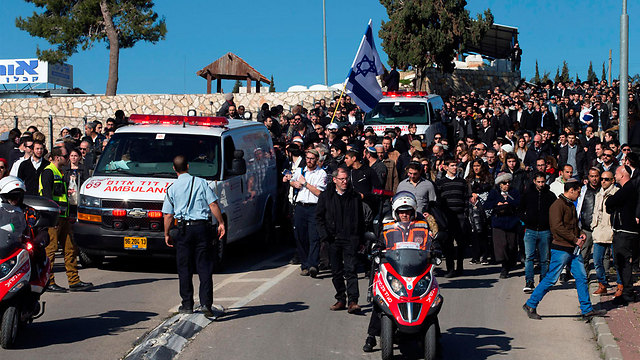 Funeral of French victims (Photo: Amit Shaabi)
The families were then offered free multi-storey burial plots, which they denied, and were finally sold four plots at 40,000 shekels a tomb. The Jewish community in Paris, though, has been asked to pay 40,000 shekels to cover the funeral expenses, because the victims were not Israeli residents. Ynet and Yedioth Ahronoth turned to the Ministry of Religious Services regarding the matter on Monday evening, but the request for clarification was answered with a stern denial; the spokeswoman for the deputy minister insisted the victims would be buried free of charge. 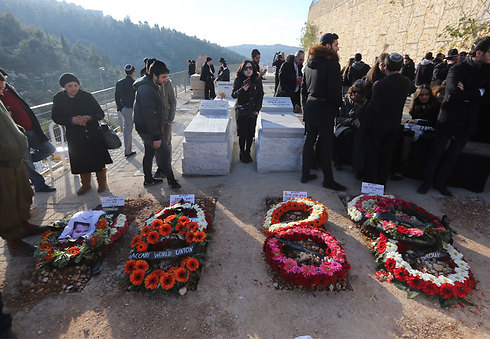 Wreaths laid on victims' graves (Photo: Gil Yohanan)
It was only a day later that the ministry admitted the State of Israel has demanded payment from the families of the victims. The ministry released a statement on the issue. "An additional check by officials in the office showed that the families of those murdered in France refused the free options and asked for a ground burial. A field burial in Jerusalem costs some 120,000 shekels. As an exception, the Jewish community (and not the families) will be charged 40,000 shekels per burial plot and 10,000 shekels for each funeral – totaling 200,000 shekels." Avraham Gila, one of the heads of the Sephardi Chevra Kaddisha in Jerusalem, told Ynet: "We compromised. Jews were killed for Kiddush Hashem. Such a plot for foreign residents doesn't sell for less than 90,000. They will receive more than 50 percent discount. We haven't even done the math at all." He added: "We offered them ground plots which are almost impossible to get. They got the best possible. I offered them free plots in the Mount of Olives but the state did not want. We checked with Bituach Leumi, but it could not pay. There is someone who wants to donate the plots. But on our end no one spoke with them about money."