Editor of 'HaMevaser' newspaper says 'including a picture of a woman into something so sacred can desecrate the memory of the martyrs', while some in community say paper went too far.

A small Jewish ultra-Orthodox newspaper in Israel is making waves internationally for removing German Chancellor Angela Merkel from a photo of this week's Paris march out of modesty.

But readers of the Hamevaser newspaper's Monday edition didn't know, as she had been digitally removed, leaving Abbas standing next to Hollande. Israeli media joked it was meant to bring Abbas closer to Israeli premier Benjamin Netanyahu, who was standing nearby. 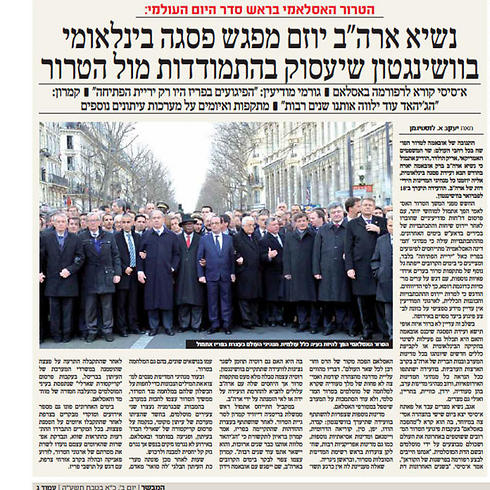 Page in 'HaMevaser' shows manipulated photo of world leaders marching in Paris, digitally omitting German Chancellor Merkel (Photo: Associated Press)
Within the insular ultra-Orthodox community, pictures of women are rarely shown in newspapers and magazines due to modesty concerns. In Jerusalem, ultra-Orthodox vandals frequently deface buses and billboards bearing advertising deemed immodest. Visitors to the religious neighborhood of Mea Shaarim are greeted with signs saying: "Please do not pass through our neighborhood in immodest clothes." "A woman's exterior should not be seen and photographed or paraded in front of men," said Yosef Haim, a neighborhood resident. "I think it's a very positive thing." The picture in Hamevaser cut out other women, like Paris Mayor Anne Hidalgo, though the newspaper clumsily left her dark glove on the sleeve of a marcher. The European Union's foreign policy chief, Federica Mogherini, was also cropped out. Binyamin Lipkin, editor of Hamevaser, said the newspaper is a family publication that must be suitable for all audiences, including young children. "The 8-year-old can't see what I don't want him to see," he told Israel's Channel 10 television station. "True, a picture of Angela Merkel should not ruin the child, but if I draw a line, I have to put it there from the bottom all the way to the top." He also said he did not want to tarnish the memories of people killed in the attacks. "Including a picture of a woman into something so sacred, as far as we are concerned, it can desecrate the memory of the martyrs and not the other way around," he said. Shmuel Pappenhym, an ultra-Orthodox commentator and educator, said that while the community must preserve its values, the newspaper had gone too far. "''The Hamevaser newspaper does a thing like this, tomorrow it appears in Germany, it appears all over Europe, the rest of the world. It mocks the Jewish Orthodox community. It makes us look narrow minded. It makes us look obtuse," he said.