MK Ayelet Shaked has won the Bayit Yehudi primaries that were held on Wednesday, it was announced Thursday morning. This win will place Shaked third on the Bayit Yehudi Knesset list after party chairman Naftali Bennett and Tekuma faction leader Uri Ariel.

Voting in the Bayit Yehudi primaries ended at 10pm on Wednesday night and, despite the worry that there would be a low voter turn-out, about 57 percent of eligible voters arrived at the polls. 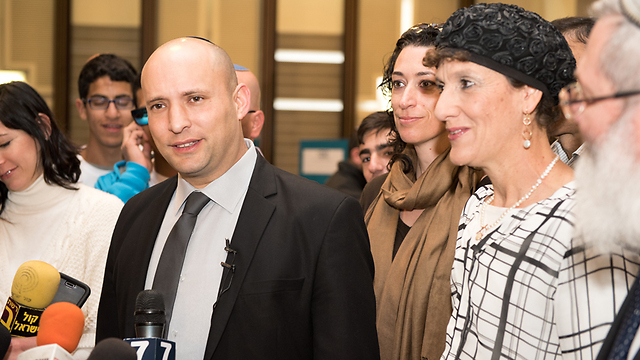 Bennett with Shuly Mualem at the polls (Photo: Gur Dotan)

The list, however, could still change according to spots reserved to chairman Bennett, who can fill them as he sees fit. 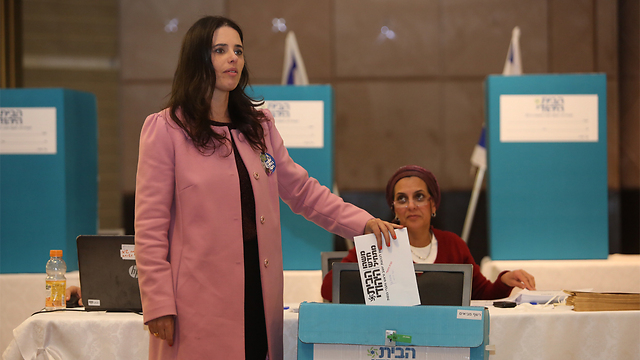 The win for Shaked could mean she will be in the position to receive a ministerial position in the next government – assuming Bayit Yehudi joins the coalition.

The 38-year-old secular candidate from Tel Aviv was ranked third in the 2012 Bayit Yehudi primaries, but was pushed down to fifth after Bayit Yehudi united with Uri Ariel's Tekuma party. Shaked served as the chairman of the Knesset's lobby for Jonathan Pollard, the agricultural lobby and the lobby for Holocaust victims, among others.

She was also a member of the Committee on Burden Equality that prepared the law requiring Haredi drafts into the IDF and their integration into the work force. The Burden Equality bill passed in the Knesset after a difficult struggle. Shaked also led the initiative to pass legislation that would prevent the release of convicted murderers and terrorists during negotiations. Another bill Shaked supported in the last Knesset was the controversial Nationality Bill which sought to cement Israel's status as a Jewish and democratic state into the country's law. The bill received criticism from both ends of the political spectrum – President Reuven Rivlin said the bill was unnecessary as Israel's Jewish and democratic nature was clearly defined in Israel's Declaration of Independence.

Shaked has suffered much criticism and resistance – especially from the left side of the aisle. Just last week, Bayit Yehudi came under fire for its position on gay marriage after a viral image of Shaked with the quote, "Whoever thinks that gays and lesbians have the right to get married in the country should not vote for me or Bennett" was circulated on social media.