Bayit Yehudi chairman and Economy Minister Naftali Bennett presented on Thursday the party's list of candidates for the next Knesset elections: "The people of Israel have changed and they want more Judaism, more values and more of the Land of Israel," Bennett said.

"The people want to bring back Jewish pride and raise our heads," the right wing leader told supporters at an event in Ramat Gan. New polls had the party at 16 Knesset seats. 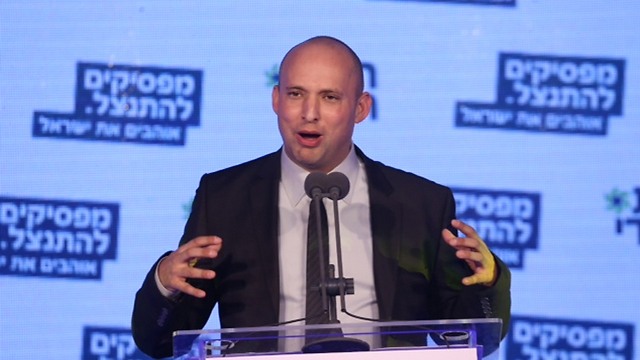 Bennett took the stage amid chants of "Here he comes, the next prime minister". Bennett promised his supporters that together, they would "bring the people to the Bayit Yehudi."

The minister then proceeded to launch a critique on several fronts: "If we would happen to take a polling station to the media, (Meretz leader) Zahava Gal-On would be the next Israeli prime minister," he said, taking a swipe at Israel's news media, which is usually perceived as leftist.

"The old elites do not understand. The left is stuck in the 90s," he said, taking aim at Isaac Herzog and Tzipi Livni's center-left Zionist Camp bloc, which he said "repeats the same mantras and does not understand that we're not getting anywhere.

"In the past they wanted to make concessions for peace, later they talked about a partner for peace and they always apologize," he said, reiterating his campaign promise 'not to apologize'. 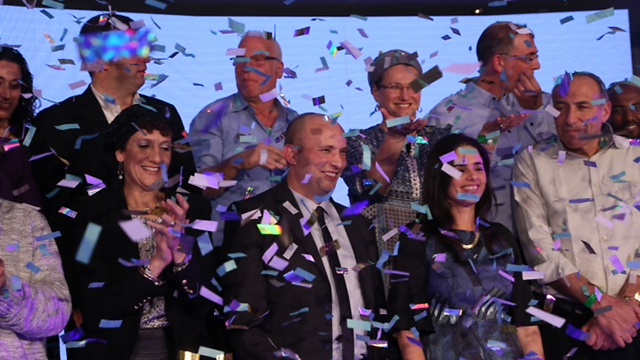 Commenting on claims that the party's list published earlier Thursday reflects extreme rightwing positions, the chairman said: "Let the headlines say that we are backwards, homophobes and extremists, and let them say that I committed a massacre in Kafr Kanna 20 years ago – we'll tell them 'You are out of fashion'. Today, love of Israel is back in fashion."

Earlier in the day, the united Zionist Camp party, headed by Isaac Herzog and Tzipi Livni, launched a statement as a response to the results of the Bayit Yehudi primaries and said that the new list which has Ayelet Shaked in third place will "exacerbate international isolation and harm the security and economic situation in Israel."

"Bennett and Netanyahu care for the interests of one sector and only offer the citizens of the country more desperation and stagnation."

The win for Shaked could mean she will be in the position to receive a ministerial position in the next government – assuming Bayit Yehudi joins the coalition.

The 38-year-old secular candidate from Tel Aviv was ranked third in the 2012 Bayit Yehudi primaries, but was pushed down to fifth after Bayit Yehudi united with Uri Ariel's Tekuma party. Shaked served as the chairman of the Knesset's lobby for Jonathan Pollard, the agricultural lobby and the lobby for Holocaust victims, among others. 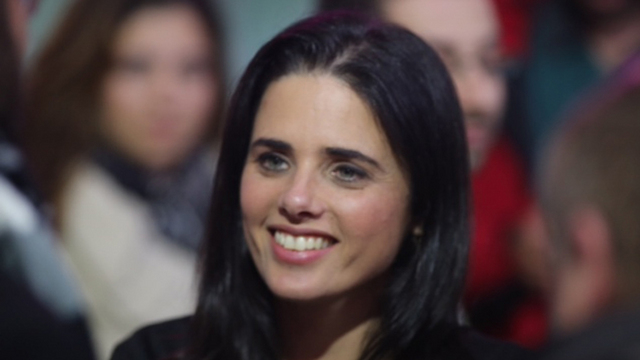 Shaked has suffered much criticism and resistance – especially from the left side of the aisle. Just last week, Bayit Yehudi came under fire for its position on gay marriage after a viral image of Shaked with the quote, "Whoever thinks that gays and lesbians have the right to get married in the country should not vote for me or Bennett" was circulated on social media.

Moran Azulay and Kobi Nachshoni contributed to this report