Hezbollah chief Hassan Nasrallah threatened in an interview Thursday to retaliate against Israel for repeated strikes on Syria and said he has missiles that can hit the Jewish state.

He also confirmed that a senior operative in the organization has been apprehended for spying for Israel. “He was responsible for one department inside one of the security units of Hezbollah,” Nasrallah said, adding that the man in question held a senior position in a "sensitive" Hezbollah security unit and was detained five months ago. 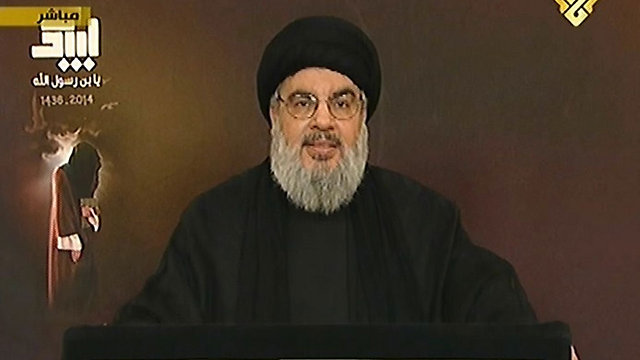 "We consider this to be a very dangerous thing, and we are dealing with it with extreme sensitivity," he said, adding that the man “confessed to everything and to what extent he collaborated with Israel,” -

Nasrallah told Al-Mayadeen television that his powerful Shiite movement has had Iranian Fateh-110 missiles that can hit the whole of Israel since 2006, adding that it is always ready to fight Israel.

A key ally of Syrian President Bashar Assad, Nasrallah, who has sent thousands of fighters into Syria to help defend the regime, said that Israeli strikes on Syria "target the whole of the resistance axis", which includes Hezbollah, Damascus and Tehran.

"The repeated bombings that struck several targets in Syria are a major violation, and we consider that any strike against Syria is a strike against the whole of the resistance axis, not just against Syria," he told the Beirut-based Arab news television. "The axis is capable of responding. This can happen any time." Asked about Hezbollah's arsenal, Nasrallah said the group had "all (the weapons) you can imagine... and in great quantities". He added: "We are now stronger than we ever were as a resistance movement." Nasrallah revealed that Hezbollah has Fateh-110 missiles, which have a minimum range of 200 kilometres (125 mile), that can hit the whole of Israel. Asked by his interviewer about this type of missile, Nasrallah said: "We have had this kind of missile since 2006" - when Israel and Hezbollah fought a devastating war. According to Pentagon officials, Hezbollah has 50,000 missiles, including some capable of reaching Tel Aviv. The Israeli air force has allegedly carried out several raids against targets in Syria, including depots storing weapons meant for Hezbollah, since the conflict there started nearly four years ago. The most recent strike was in December, when Israeli warplanes reportedly struck weapons warehouses near Damascus, according to the Syrian Observatory for Human Rights monitoring group. Israel has never confirmed it carried out the strikes, but it says it has a policy of preventing arms transfers to militant groups including Hezbollah. Israeli media said, however, after the December strikes that the air force had targeted arms convoys or depots of Iranian-made rockets. Nasrallah said in the interview that Hezbollah was ready to fight a new war against Israel in Lebanon and renewed a threat to invade the Galilee region of northern Israel. Hezbollah fighters "must be prepared", he said. "When the resistance (Hezbollah) leadership... asks you (fighters)... to enter into Galilee, that means the resistance must be ready to enter into Galilee and to go even beyond the Galilee." The 2006 summer war Hezbollah and Israel fought killed some 1,200 Lebanese - most of them civilians - and 160 Israelis - most of them soldiers.