Sweden's foreign minister said on Friday Israel had irritated close allies by over-reacting to Stockholm recognizing the state of Palestine, saying its rhetoric over the issue had "crossed all limits". 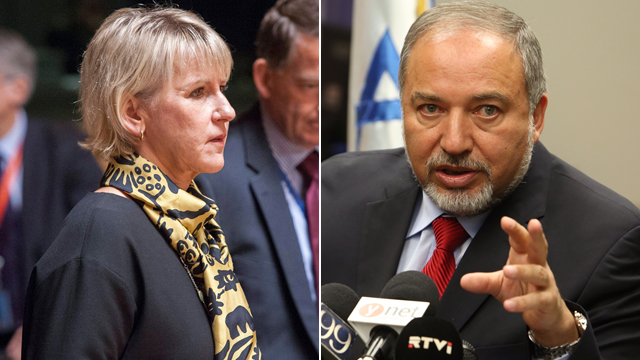 Foreign Minister Margot Wallstrom / Foreign Minister Avigdor Lieberman
Relations between Israel and Sweden have nose-dived since Social Democrat Prime Minister Stefan Lofven used his inaugural address in parliament last year to announce that his country would recognize a Palestinian state. Israeli said the move was ill-considered, would not contribute to peace and called its ambassador back to Jerusalem for discussions. The United States said recognition was premature.

In the interview, Wallstrom said Sweden supported Israel, Palestine and peace, but was sharply critical of Israel's policies. "Israel has been extremely aggressive," she said.

"They have continued with their settlement policies, they have continued demolitions, they have continued with their occupation policies which entail a humiliation of Palestinians, which makes the (peace) process difficult." Wallstroem was scheduled to arrive in Israel in mid-January in order to attend a memorial service for the Swedish diplomat Raoul Wallenberg who saved Jews during the Holocaust. However, prior to the visit, Foreign Minister Avigdor Lieberman announced he would boycott the Swedish Foreign Minister’s visit. "We said that it is difficult to put these meetings together, diplomatic meetings of any kind, as we approach the elections," Paul Hirschson, spokesman for Israel's Foreign Ministry, told Reuters. "I would add that the atmosphere between Israel and Sweden is not exactly the best right now and that factors into the decision. But the primary issue is the timing, more than anything else." On Thursday, Israeli officials were slightly more blunt, saying "Do not wait to travel to Israel until the Swedish foreign minister comes here, because that could take a long time," Israeli foreign ministry spokesman Emmanuel Nahshon told public broadcaster Swedish Radio.

"The Swedish foreign minister would not have been given any official meetings in Israel if she had traveled here. What Sweden did was an utterly unfriendly action," Nahshon added.

"It is basically an insult," Per Joensson, an editor with the Swedish Institute for International Affairs, told AFP.

"That is not a way to treat a sovereign foreign minister, unless you really want to punish her."

Despite the furor, Sweden said Wallstroem would visit Israel after the March 17 election there.

"It's in everybody's interest to have good diplomatic ties and we respect that there is an election campaign in Israel now and that there is a heightened debate," foreign ministry spokeswoman Annika Soeder told Swedish Radio.

According to the Palestinian Authority, around 135 countries have recognized the state of Palestine including several that are now EU members.