Seventy years on, mystery still surrounds the disappearance of Swedish diplomat Raoul Wallenberg who saved tens of thousands of Jews from the Holocaust, though his family is certain the answer lies with Russia.

The young diplomat went missing on January 17, 1945 after being summoned to the Soviet headquarters in wartime Budapest.

Historians, experts and relatives have long questioned circumstances surrounding his disappearance as well as Soviet assertions that he died two years later in a prison beneath the secret service headquarters in Moscow.

"It is possible to find the truth," she told AFP, remembering her older sibling as "funny and warm". 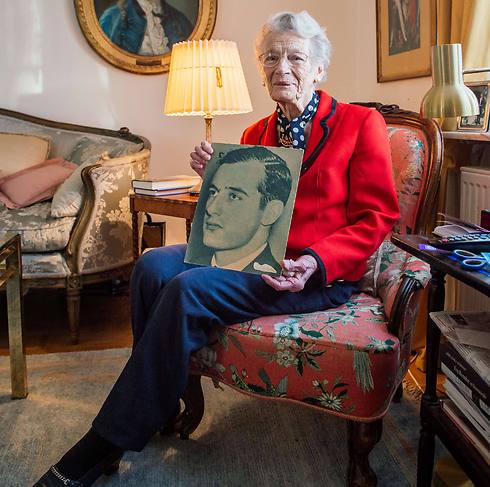 Nina Lagergren holds a picture of her brother at her apartment in Djursholm near Stockholm (Photo: AFP)
In 1944, Wallenberg was sent as a special envoy to the capital of Nazi-controlled Hungary and by early 1945, had issued Swedish papers to thousands of Jews, allowing them to flee the country and likely death at the hands of the Fascists. Several months before the war ended, the Soviets invaded Budapest and summoned the Swede to their headquarters. He was never seen again.

Lagergren, like some experts on the Wallenberg case, is convinced the truth about her brother's fate is hidden in Russian archives

"It's a shame that Russia is still playing cat and mouse," author Ingrid Carlberg, who wrote an extensive biography of Wallenberg, told AFP.

"Russia must open its archives. It's been 70 years since he disappeared, his sister is alive and still awaiting a response," she said.

In 1957, Carlberg said, Soviet authorities produced a document claiming that a prisoner by the name of Wallenberg had died a decade earlier.

And "after the fall of the USSR, the Russians presented numerous documents relating to the Swede, but there is no doubt that to this day they have not shown it all," she said.

A group of researchers recently produced new information linking Wallenberg to a German businessman who was protected by Nazi leaders, suggesting the full story had not been told.

Hans Olsson, who is in charge of the case at Sweden's foreign ministry, said the government considers the Wallenberg dossier "completely open".

"We do not believe the full picture is known. When there is a new element of interest, we present it to the Russians."

For a long time, "the behaviour of the foreign ministry and its lack of interest were really strange," Lagergren said.

Saviour sent by the US

In her apartment in a Stockholm suburb, she has devoted an entire room to the files she has collected on her brother.

"We (she and her older brother Guy von Dardel) always admired him," she said. "He meant a lot to us because he was tremendously funny and warm." 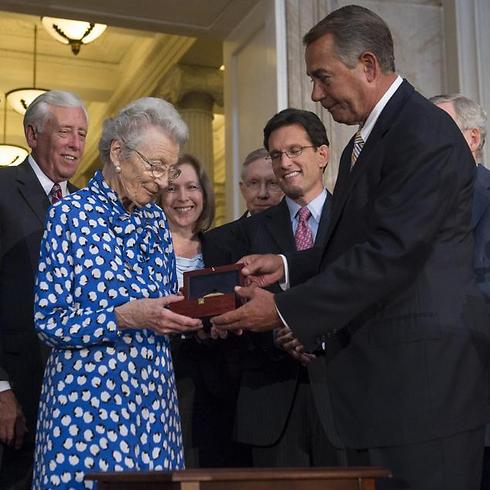 US Speaker of the House John Boehner presents Nina Lagergren with a Congressional Gold Medal awarded to her brother (Photo: AFP)

Lagergren is the last family member to have seen Wallenberg alive, when she lived in Berlin in the summer of 1944.

"He was in a big hurry (to go to Budapest). He understood the gravity of his mission," she said.

Wallenberg was sent to Budapest by the War Refugee Board – a US agency created to save civilian victims of the Nazis by providing them with papers for neutral countries such as Switzerland, Sweden and Turkey.

He organised the Budapest rescue mission which, according to certain estimates, saved 100,000 people from persecution.

"In the few lines he sent in telegrams, we understood the situation," Lagergren said of his brief messages from Hungary.

Thanks to his efforts, he was in 1981 the second foreigner ever to be named an honorary citizen of the United States, after Britain's wartime prime minister Winston Churchill.

Wallenberg's commitment made him "a symbol of civic courage," said Johan Perwe, spokesman for the Living History Forum, a Swedish government body that promotes tolerance and equality among schoolchildren.

"Unlike my grandmother's generation and the generation after that, who have grieved closely, my generation can use Raoul (Wallenberg) as something positive," said Cecilia Ahlberg, Lagergren's granddaughter.

"As an example and an inspiration," she said.