Ethiopia is aiming to enhance access to affordable and environmentally-friendly renewable energy for its population, with the country’s Ministry of Water, Irrigation and Energy announcing last month that it had signed an agreement with an Israeli solar-hybrid power company to further this goal. The leading Israeli developer of solar-biogas hybrid power technology, AORA, will be the first to provide solar-biogas hybrid power solutions for rural communities in Ethiopia.

Ethiopia often suffers from blackouts due to its lack of power and two-thirds of the country’s citizens have no electricity. "We are pleased to partner with the Ministry and look forward to bringing our technology to Ethiopia to provide the population with affordable access to power,” said Zev Rosenzweig, CEO of AORA, whose offices are based in Rehovot.

"Such access will have significant social and economic impact on off-grid communities, helping to provide power to schools and medical facilities, refrigeration for food processing and post-harvest storage, groundwater pumping and much more,” added Rosenzweig. 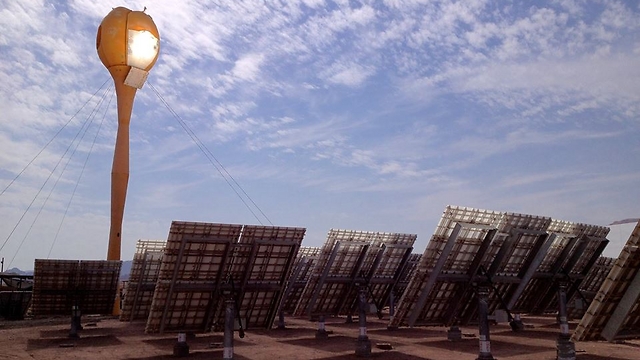 AORA's tulip-shaped solar power plant.
In November 2011, Ethiopia launched the Climate Resilient Green Economy Strategy which aims to achieve the development objective of becoming a middle income, green economy nation by 2025. A primary goal entails the generation of energy from renewable sources for domestic and regional markets. "We are transforming our Green Economy Strategy into action and are pleased to partner with AORA to help achieve our vision,” said Alemayehu Tegenu, Ethiopian Minister of Water, Irrigation and Energy. "AORA’s unique solar-hybrid technology is impressive and well-suited to provide both energy and heat to support local economic development in off-grid rural locations in Ethiopia,” said Tegenu. AORA’s technology runs not only on solar radiation, but also on almost any gaseous or liquid fuel, including biogas, biodiesel and natural gas. This enables a variety of operational modes – from solar-only mode, where electricity is supplied from ample sunlight, to hybrid-mode when fuel helps generate full power when sunlight is insufficient. At night time or during days of heavy overcast, the fuel-only mode goes into operation. This guarantees an uninterrupted and stable power supply 24 hours a day in all weather conditions.

The AORA tulip-shaped solar power plant, whose technology was developed by the Weizmann Institute, requires less land to generate usable power and heat than other systems as well as less water. Each Tulip station is small and modular, and adaptable to topography.

Construction of the first pilot plant in Ethiopia is expected to begin by mid-2015. Following the trial, the Ethiopian government intends to expand deployment of AORA installations for rural economic development to off-grid communities in selected areas of the country.