After Likud campaign video shows Bennett playing with tanks, Bayit Yehudi Chairman lashes back at Netanyahu: 'Everyone knows who obstructed the plan to destroy terror tunnels.'

Bayit Yehudi Chairman Naftali Bennett fired back at Prime Minister Benjamin Netanyahu after a Likud campaign video posted Saturday depicted him as a child playing with tanks and Netanyahu as a kindergarten teacher attempting to keep order, saying: "At least this child won't let missiles fly over Ben-Gurion Airport."

In the campaign video, Netanyahu is the one adult in a kindergarten populated by his rivals - played by children - who are wreaking havoc on the room.

Last year, Likud and the Bayit Yehudi forged an agreement not to attack each other during the elections, in an attempt to strengthen the national bloc. Speaking to Army Radio earlier Sunday, Bennett commented on what he said was Netanyahu's violation of the deal, saying: "In general, one should not fire inside the tank – not because it's not possible, but simply because by doing so, we are rewarding Tzipi Livni and Buji. I will continue to focus on convincing the Israeli public to support us and the national camp, and will make efforts not to hurt anyone inside the national camp."

The Bayit Yehudi chairman added: "I think that today everyone knows who presented the plan for the destruction of terror tunnels on June 30th, during Operation Protective Edge, and who obstructed it for weeks, until eventually we exited (the Gaza Strip) very late and paid a heavy and unnecessary price." 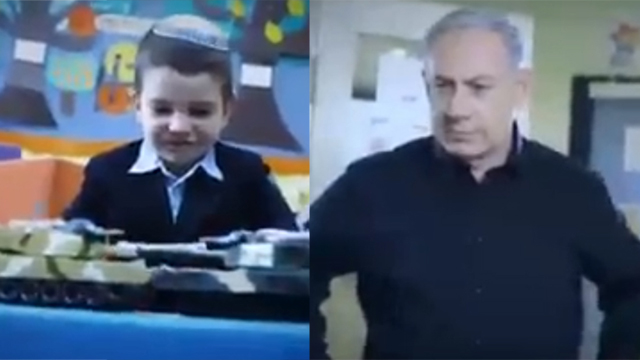 Kulanu party chairman Moshe Kahlon, preferred to address a different aspect in the video posted by Likud: "I don't know where Bibi found a kindergarten with less than 35 children, but I'm glad to see he finally realized that is responsible for the shortage in teacher aides."

In addition to Bennett, Yair Lapid, Avigdor Lieberman and Tzipi Livni also appear in the video.

When little Lapid and little Bennett fight over a chair during a game of musical chairs, Netanyahu tells them off, and tells a hyperactive little Tzipi Livni to "stop running from one place to another."

"This is a waste of time, we can't continue with this kindergarten," Netanyahu then decides, with the final message being: "To run a country, you need a strong and stable government."

"We view the cynical use of small children for election propaganda very gravely," Kadman said. "It is particularly unfortunate that this is done by a big ruling party that is supposed to know the law and respect it."

Amendment 18 to the Election Law states that a child under the age of 15 cannot participate in election propaganda. Participation of children in campaign videos is forbidden, unless it is a video or a photo showing a child engaging in normal activity.

"They took very small children, and made inappropriate and illegal use in them only for the sake of slamming other parties," Kadman said.

Kadman said the Israel National Council for the Child will complain to the head of the Election Committee of the violation of the law, and ask him to work to prevent other parties of breaking this law.

The Likud party said in response that "this is one campaign video of many. It was prepared but was not approved for broadcast. The video was filmed based on a legal opinion prepared beforehand by the Likud's legal adviser, and after the required permissions were obtained, including the parents' permissions. Unfortunately, due to a technical error, the video went online even though it was not approved for release and broadcast by the Likud campaign."