Miss Lebanon in hot water for selfie with Miss Israel

Saly Greige, Miss Lebanon, slammed in local media for taking selfie with Doron Matalon ahead Miss Universe contest: 'She photobombed us,' she said in her defense amid cries for her to be stripped of title.

Miss Lebanon Saly Greige is in some serious trouble in her home country after she posed for a selfie with Doron Matalon, Miss Israel for 2014, as the two prepared for the Miss Universe competition.

Lebanese media and social networks have been in furor in recent days in wake of the picture, which Miss Lebanon now says "was photo-bombed" by Matalon. 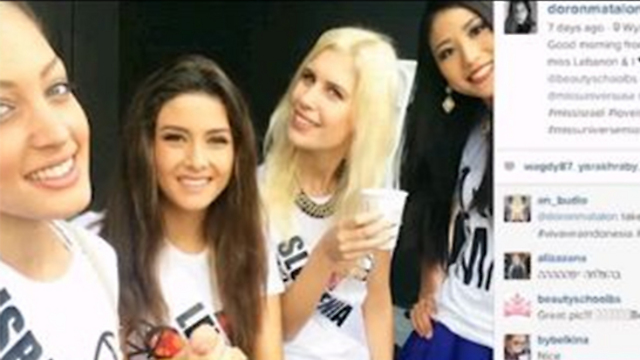 Greige has been attempting damage control, claiming that she was caught unawares.

“From the first day I arrived at the Miss Universe pageant I was very careful not to take any pictures with Miss Israel, who tried repeatedly to take pictures with me,” Lebanon's Daily Star quoted Greige as telling a local entertainment news site. “While I was preparing with Miss Slovania and Miss Japan to get our photograph taken, Miss Israel jumped in and took a selfie with her phone and posted it on social media," she pleaded, attempting to defend herself from the massive waves of criticism being lobbed at her. Some detractors are even calling for her title to be stripped from her in wake of the photo.

Lebanon's Al Jadid published a scathing report of the incident, in which they poked fun at Greige, and asked by the model, who once said she enjoys reading, failed to read a book explain that Israel is an enemy state.

It was only in October that the young woman became a cultural icon and a source of pride in her Christian village in north Lebanon. 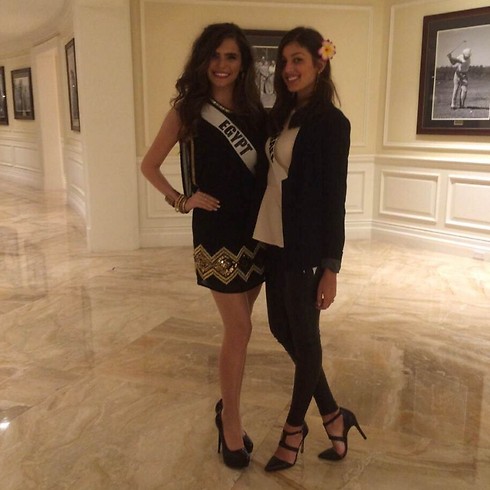 Matalon, who was in the news years ago when a haredi man sexually harassed her on a bus during her military service, has been living in Miami ahead of the competition.

Matalon was also photographed with Miss Egypt, but it was apparently a one-time event. Egypt's representative, Lara Debanna, was reportedly instructed by "higher up" to keep her distance from Matalon, and to avoid being photographed with her under any circumstances.

"We took a group picture with Miss Slovenia, Miss Japan, and Miss Lebanon," said Matalon. "She must have received criticism from fans in Lebanon after I uploaded it, and now she will not stand next to me in any situation, and now Miss Egypt is behaving the same way."

"It's a shame that we can't set all the hostility aside just for the period of the competition," Matalon said, adding that she was not surprised by the development. "We really have a rare chance to meet girls from all over the world and hear about their different cultures."

Lebanon and Israel remain in an official state of war, and though border incidents are rare since Israel fought a bloody war with Lebanese Shiite terror group Hezbollah in 2006, relations with Israel are frowned upon, and those crossing the border, even for cultural or personal reasons, are usually interrogated.