Some 150,000 people light candles and hold hands at vigil for Tunisian-born Yoav Hattab, who was killed in Paris terror attack.

Jews and Muslims alike congregated on Saturday night in front of the Great Synagogue in Tunis for a vigil in remembrance of Yoav Hattab, a Tunisian-born victim of the terror attack on the kosher supermarket in Paris less than two weeks ago.

The event also served as a show of support by local residents for the young man's father, who is a rabbi at the Jewish school in the North African country's capital city. 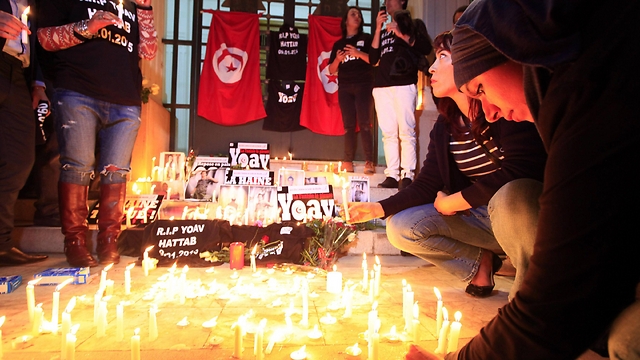 Some 150 people participated in the memorial event, which made the front page of Tunisian daily Le Temps. The crowd lit candles and placed pictures of Hattab by the building's entrance alongside posters and Tunisian flags.

The participants held placards with slogans, such as one declaring, "Long live multi-cultural Tunisia". One of those present was Besima Boughneya, who said, "I am here as a citizen, because he was a Tunisian and this has broken my heart." 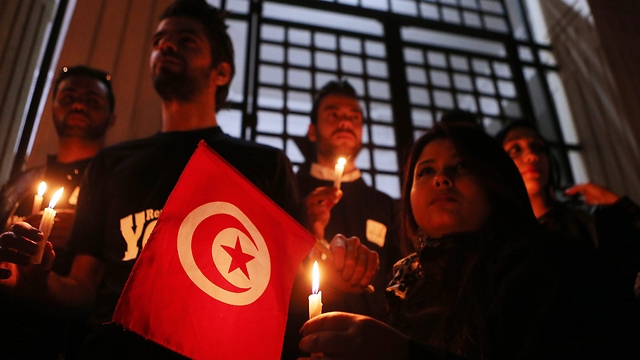 But while the moderate Islamist movement Ennahda, which had previously been in power, has expressed its condolences to Hattab's family, there has been no official comment.

"That is a disgrace," said Erij Bodhief, a 23-year-old student.

"I am a Muslim and I came. He was a child of Tunisia. What sort of message are the authorities sending to the Jews of Tunisia by not talking about this?"

The vigil was an unusual expression of harmony with Jews in a country with an overwhelmingly Muslim population.

Sion Cohen from the southern island of Djerba where most of the predominantly Muslim country's 1,500 Jews live said: "This gathering shows Tunisia brings everyone together. As far as I know, this is the first demonstration of its kind in solidarity with Jews every held" in the country. 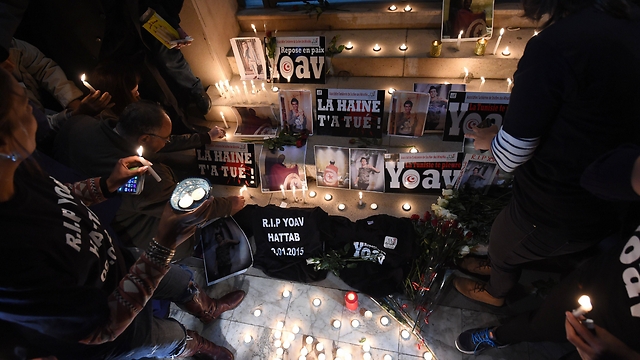 Tunisian newspaper Le Temps dedicated its front page to the murder of Hattab, while also noting the Tunisian heritage of the other victims. Under the headline "Tunisia bereaved", the publication told Hattab's story alongside pictures taken on the streets of Tunis after the country's democratization.

Hattab, 21, was killed in the terror attack on a Paris kosher supermarket along with Yohan Cohen, 20, Philippe Braham, 45, and Francois-Michel Saada, 64. Witnesses said Hattab tried to overpower the terrorist, Amedy Coulibaly, and take his weapon during the incident. He was interred in Jerusalem last Tuesday.

Hattab's aunt, Yehudit Bucharis, was killed 30 years ago at the age of 14 in a terror attack on a synagogue on the island of Djerba in Tunisia.