French authorities have honored a Mali-born employee who saved lives at the kosher supermarket attacked by a terrorist as a hero and granted him French citizenship on Tuesday. Interior minister Bernard Cazeneuve praised Muslim Lassana Bathily, 24, for his "courage" and "heroism" during a ceremony Tuesday in the presence of Prime Minister Manuel Valls. 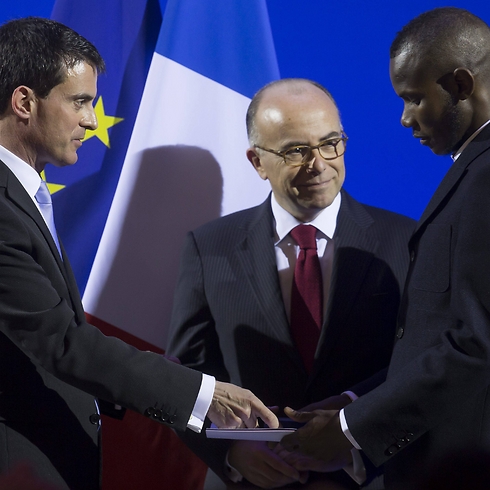 Bathily and Prime Minister Valls during the ceremony. (Photo: EPA)
Cazeneuve said Bathily's "act of humanity has become a symbol of an Islam of peace and tolerance."

Bathily was working at the Hyper Cacher supermarket in eastern Paris on January 9th when terrorist Amedy Coulibaly burst in with weapons and killed four Jewish Frenchmen. Without hesitation, knowing that if caught his own life would be in danger, Bathily led six customers down to the freezer rooms, out of the sight of the gunman.

"I am a devout Muslim, I even pray in the store. We get on excellently, the Jews and I, and the terror attack has hurt me," Bathily says in an exclusive interview with Ynet's sister publication, Yedioth Ahronoth. "I have been in shock since it happened."

Bathily was in the store's underground stockroom when Coulibaly burst in upstairs. He turned off the stockroom's freezer and hid a group of shoppers inside before sneaking out through a fire escape to speak to police and help them with their operation to free the 15 hostages and kill the attacker.

"Shortly after 12:30 I went down to the bottom floor, in order to organize the stock, and after a few minutes I suddenly heard gunshots. Seconds later, customers and other staff began to run down the stairs, and I asked them what had happened. They told me that there was a man armed with a Kalashnikov upstairs."

A police official, speaking on condition of anonymity because he wasn't authorized to talk on the record, explained that Bathily gave police a key that allowed them to storm the supermarket without having to punch their way through the shutters that had been brought down by the terrorist at the start of the attack.