'I threw my bag at the terrorist and smashed the window,' says eighth grader who survived Tel Aviv attack

Eyewitnesses recall how passengers fled to back of bus to escape terrorist; courageous driver wrestled with armed attacker as they broke windows.

Liel Suissa, an 8th grader from Bat Yam, was on his way to his new high school Wendesday morning, when a Palestinian terrorist armed with a knife began to attack people on the number 40 bus in central Tel Aviv.

"The terrorist suddenly began stabbing," the 13-year-old recalled. "We all ran back. Most people came flying towards me.

"I was sitting on the bus and I heard people shouting. The terrorist had suddenly gone to the driver and stabbed him. He was shouting things, but I couldn't hear clearly. I saw him stab the driver, and I ran to the back with the others to get away from him. He approached us, I broke the window and got out." 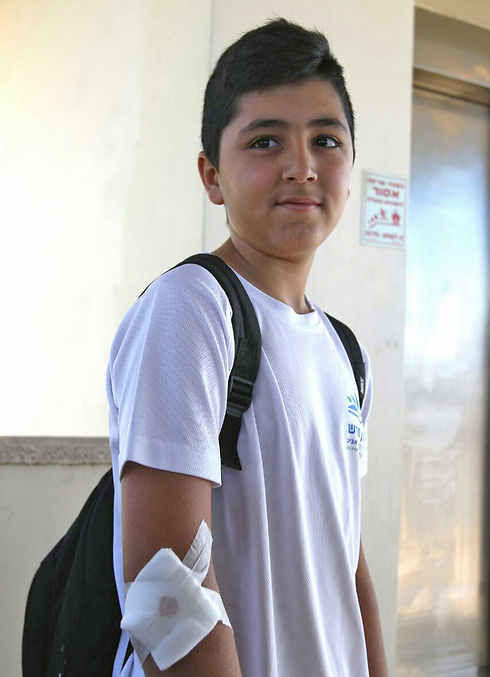 "He chased us even after we left the bus, with the knife in his hand. I ran behind some cars, and when the security guards came to chase him, I pointed to where he had run. They said afterwards that they had shot him in the leg. I was nervous at first, but then I got over it. I feel alright. It felt like a movie, not like something real. There was a lot of stress."

Thirteen people were wounded in the stabbing on the number 40 bus as it approached Beit Ma'ariv Bridge in central Tel Aviv. The terrorist, a young Palestinian armed with a knife, stabbed more than a dozen people on the bus, including driver Herzl Biton, before fleeing. He was chased and shot in the leg by members of the Nachshon unit of the Israel Prison Service, who had been in the area. Four of the wounded are in serious condition.

Sapir Tzioni, 22, from Bat Yam, was on her way to work when the attack took place.

"I did not see what happened, and suddenly I saw that the driver started to lose control. I saw the terrorist begin to stab people wildly and I heard screaming. He started stabbing the driver and slowly advance, and I saw that they were fighting," she said.

Sapir was treated for shock at Tel Hashomer Hospital and later discharged. 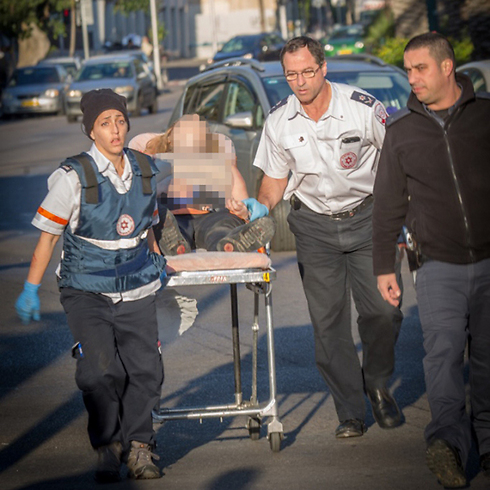 Rescue personnel rush a wounded man from the site of the attack. (Photo: Magen David Adom)

The commander of the Prison Service unit, Benny Butershvili said it took a moment for him to understand that an attack was taking place on the bus in front of him.

"I saw the bus had stopped at a green light and then people spilled out and screamed for help. We realized then that it was a terrorist attack. I and a team of three other fighters from the Nahshon unit spotted the terrorist and chased after him. I outflanked him on one side, and the fighters outflanked him on the left and fired into the air," he said.

"We shot at his legs, and the terrorist collapsed and fell; we handcuffed him and waited for the police to arrive," he added. "After we shot him in the legs he didn't say anything."

Hamza Muhammed Hassan Matrouk, a 22-year-old from Tulkarm, was named as the attacker.

During questioning, he said he committed the attack because of Operation Protective Edge and events at the Temple Mount. He also said he was motivated by watching radical Islamic material that spoke of "reaching paradise".