Yemen, Iran and death to Israel

Analysis: Instability in Yemen, one of the poorest countries in the Arab world, seems to have reached boiling point; but who stands to win or lose from a revolution there, and what implications would that have for Israel?

The leader of the Shia Houthi rebels, who on Tuesday took control of the presidential palace in Yemen, delivered an address on television later that day and accused Yemen President Abd Rabbuh Mansur Hadi, who may soon be deposed, of lending a hand to acts of corruption and refusing to deploy Yemen's army in the fight against al-Qaeda.

Houthi leader Abdul Malik al-Houthi was speaking in the wake of two days of intense fighting between the Shia rebels and government forces that culminated that afternoon in the battle at the presidential palace. He said that the operation carried out by his forces was designed to thwart a plot to annul the agreement on political reform and to divide Yemen. 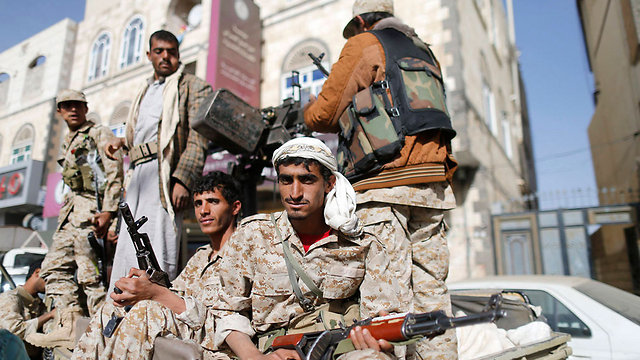 The chaos in Sana'a over the past few days has sparked concerns that Yemen, already unstable for years, is sliding towards a civil war that will impact greatly on other countries in the region too, Iran and Saudi Arabia in particular, and the global war on terror. The following are a number of questions and answers about what is going on there.

What has been happening in Yemen in recent years?

Yemen has been suffering from security instability for years, and even more so since the ousting in 2011 of dictator Ali Abdullah Saleh, who ruled the country for 33 years. Saleh was the fourth Arab ruler to be deposed during the Arab Spring. Despite being an important hub for maritime traffic, and despite its oil resources, Yemen is one of the poorest countries in the Arab world, and its citizens took to the streets at the time to protest the severe poverty and unemployment.

Unlike other Arab leaders who were ousted during the Arab Spring, Saleh ceded power to his deputy, Hadi, in a relatively quiet fashion, even after long months of violence: He stepped down as part of a political agreement imposed upon him by the Arab Gulf States, led by Saudi Arabia. But as has been the case in the other Arab countries that have ousted their rulers, the desired change has been slow in coming: Still today, Yemen is burdened by an unemployment rate of 33 percent among its young citizens, and it is having to deal with terror attacks carried out by Jihadist organizations, and al-Qaeda in particular.

Who is in power in Yemen now and what is the nature of his ties with the West?

President Abd Rabbuh Mansur Hadi has been in power for three years. He maintains correct ties with the West and good relations with the Gulf States that are allies of Washington; they, after all, were the ones that took care of his appointment. Under the patronage of Hadi's government, the United States carries out drone strikes on Yemeni soil against al-Qaeda's Arabian Peninsula arm, which uses Yemen as a home base from which to launch attacks on the West.

During his term in office, Hadi, a Sunni, has had to deal with protests against him. His opponents argue that Yemen's military remains full of associates of the ousted president and that Hadi is merely perpetuating the old regime rather than instituting substantial change. In the wake of the protests, he was forced to lay off a number of senior officials. Meanwhile, Saleh, who was wounded during the uprising against him in 2011, has returned to Yemen, and certain elements suspect him of fueling the Houthi rebellion, but there is no clear proof of this. Like the Houthis, Saleh too belongs to the Zaidi branch of Shia Islam.

Who are the Houthi rebels?

The rebels are Zaidi and members of the Houthi movement, named after its founder, Hussein Badreddin al-Houthi. For years, Yemen's Shia minority (35 percent of the population) has accused the Sunni majority of discrimination, and Shia groups have initiated a number of uprisings in Yemen since the 1990s, primarily in the north of the country.

The Houthis are trying to present themselves as a political movement that seeks to eradicate corruption, and thus to differentiate themselves from other Shia groups, which are perceived to be driven by a desire to affect religious revolutions in the Sunni states. The Houthis enjoy good relations with Shia Iran and its proxy, Hezbollah, and harbor hatred for Israel. They see the Jewish State as a true enemy, and their symbol even includes the words, "Death to Israel."

Where do things stand now?

At the moment, the situation in Yemen remains unclear. The Houthis have taken control of the government news agency, the television building and the presidential palace, and government spokesmen have said that a coup is imminent Since September, in fact, the Houthis have been in control of most of the capital, Sana'a. Nevertheless, the fact that the Houthis have yet to announce the ousting of the president could indeed indicate that they really are seeking a political solution and are in no hurry to complete a coup. 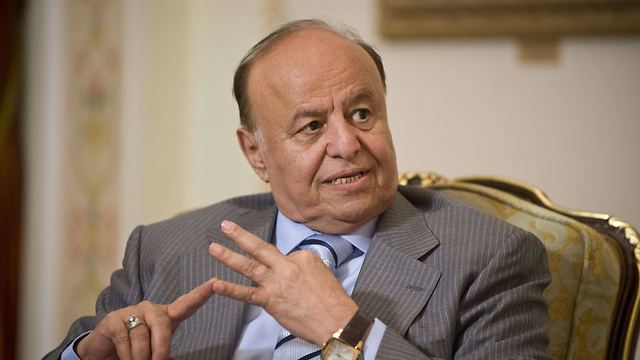 Despite the fierce battles in the capital and the takeover of the palace, the rebels haven't crossed the line and claim they are remaining at the palace only for the purpose of protecting it. They also took the trouble to deny reports of an attempt on their part to carry out a strike on Hadi's private residence –a denial that probably came to calm tensions in the country.

There have also been reports in the past day of an agreement that would end the current stand-off, removing the Houthi militias from major government buildings in return for a revision of Yemen's constitution that would give more political power to the Houthis.

The events of the past few days, however, make it very difficult to predict possible developments in Yemen. A number of ceasefires have already been broken; and because the true roots of the unrest lie in the Shia-Sunni conflict, escalation into a civil war like we have seen in Iraq and Lebanon, and are now witnessing in Syria, is always a possibility.

Who stands to gain and lose from a revolution in Yemen, and how would it affect the rest of the world?

Iran, the leader of the Shia world, would be the biggest winner. Tehran has already tried to promote a coup in Bahrain, where a Shia majority is ruled by a Sunni minority, and it has dipped its fingers into Yemen too. As far as Tehran is concerned, the Houthis are an advanced force that could help to achieve hegemony in the Middle East and make things difficult for Iran's traditional rival – Saudi Arabia, the leader of the Sunni world.

Chaos in Yemen could further destabilize the Middle East, wh

ich is already under the sword of Jihad more so than ever before, and also undermine the global war on terror. Al-Qaeda's Yemen branch could exploit the situation to operate more freely.

It will be interesting to see how the Houthis act in this regard: On the one hand, they detest the United States; on the other hand, they are also bitter enemies of the Sunni al-Qaeda, the organization against which the United States is carrying out drone strikes in Yemen.