Kamal Hachkar: I perceived Jews as something belonging to Europe.
Photo: Tehila Raanan

The Muslim and the lost Jews of Morocco

A surprising discovery by Muslim director Kamal Hachkar led him to Israel, where he found the former Jews of the Atlas Mountains, learned Hebrew in ulpan and embarked on a battle to break down stigmas.

Kamal Hachkar, a French director of Muslim-Moroccan descent, by chance during a visit to his homeland made a shocking discovery about Tinghir in the Atlas Mountains - the existence of the town's Jewish residents, who lived for thousands of years alongside their Muslim neighbors, including his family. Close neighborly relations were cut with the immigration to Israel of the Jews of the mountain village.

In the documentary "Tinghir-Jerusalem, echoes of Mellah", Hachkar leads the viewers through his own journey to uncover the missing residents of the town. His journey brings him all the way to Israel, where he tracks down the former Tighrir inhabitants to their unkempt backyard.
Plurality of Identities
Morocco's Jewish community explored
jn1.tv
Although Jewish population has now dropped to around 3,000, its history and culture continues to make its mark on northwestern African country today, with Arab and Berber Moroccans having incorporated many Jewish habits into their daily lives.
Morocco's Jewish community explored
Through technology, he brings the one-time neighbors to together to talk after decades of separation. The 2012 film was shown on Moroccan state television, causing an emotional response in its millions of viewers - and it was screened recently in Israel as part of the DocAviv Negev festival in Yeruham.
בימוי: כמאל אשקר, צילום: פיליפ בלאיש, עריכה: יעל ביטון
X

Following his video journey, Hachkar has returned to Israel several times, even learning Hebrew in Haifa. And, as part of his discovery of his roots, he moved to Morocco and maintained a warm relationship with the Jewish community. His latest visit to Israel was also the first opportunity to hear from the director, who hopes to create a bridge of friendship between Israelis and Moroccans.

I meet Kamal in Jerusalem, where he is a guest of Joelle Afflalo of the Matanel Foundation, for an evening entirely devoted to paying homage to experiences in the Maghreb. He already feels here "at home," he says, communicating in English and Hebrew.

"On one family holiday, as I walked the streets of the town with my father, I ran into an old closed up house", he recalls. "Dad told me that Jews once lived here, and that was for me a real shock. Until then I was not aware that there were Jews in Morocco. I learned the story of the Holocaust in the French school, perceived Jews as something belonging to Europe, and suddenly discovered that this is totally wrong."

The discovery sparked curiosity within Hachkar about the identity of the Jews of Tinghir.

"I felt that we were the same, and their identity as Jews confused me, because from the outside they seemed Muslim," he explains, adding that he had wanted to show respect for these people, who had been deleted from the history of the Atlas Mountains, where they had lived for hundreds of years.

In one scene in the film, an elderly man from the village talks about the departure of his Jewish friends: "When they left, we said, poor things, leaving Tinghir, their home. The place where you are born and grew up, that is your country. You have a house, and suddenly, you must leave it. It's bound to be hard."

Hachkar embarked on a lengthy mission to track down the surviving Jewish villagers.

"Most of them are elderly women who today live in Yavne or Safed, and who suddenly find they share a dialect and cultural experience with the young Muslim opposite them," he says.

"This region in Morocco is an area that Moroccans like to define as 'primitive'. (Israeli singer) Shlomo Bar sang about Todra village, which is in the same area. We have a unique dialect and culture, but I learned while I was in Israel that this stigma is not only in Morocco."

The crux of the film centers on the shared cultural experience of Jews and Muslims from the country, and certainly made waves.

"They are very proud of this shared culture", says Hachkar. "We share a Moroccan-Berber identity, an identity shared by Jews and Muslims. This did not vanish even after we left - in my case to France, and in their case to Israel."

Hachkar decided to return to live in Marrakech, Morocco, and was unwilling to give up on his complex cultural identity.

"Although I grew up in France and have a French passport, French culture and I think in French, I also from Morocco. In Marrakech, we have a small Jewish community, and if you go to the synagogue on the Sabbath, attend prayers, it's sustenance.

"There are also some Jews from the United States, and even Israelis who return live in Morocco. Now I'm planning a film about the singer Neta Elkayam and the new Israeli generation of Moroccans, whose dream is to make a Moroccan passport, and connect to this side of their culture, a party who did not have such an expression here." 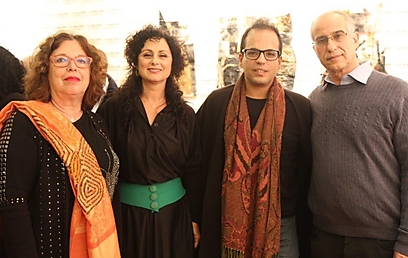 This shared experience, he says, can help mend ties between Jews and Muslims, driven apart by the fighting in the Mideast.

"If we want to make peace and build bridges, it is possible. We have the same memories, same songs, same cultural experiences. It is hard now because there is a lot of reaction to the Israeli-Palestinian conflict, but it is all there. When you listen to a Moroccan song sung by Neta Elkayam, you - like every young Moroccan - connect. We are the same, brothers and sisters. "

The impact of the story of the Maghreb Jews on Hachkar's life was immediate.

"My acquaintance with Jewish culture made me become more familiar with my own Arab culture. It is a shame that there is no widespread call for it here. Many Israelis do not know the Arabs in Morocco, and vice versa. Moroccan Arabs do not know the Israelis. For them, they are all soldiers. We have to get to know each other through culture, and this is what I'm trying to promote," he says.

"I met an elderly woman in Yavne during filming, someone who felt like my grandmother, and she said: 'Haram! Earth did not move. It will always be here. We have to live together. We can live together. We live with complex identities today - you no longer have to choose. You can be both Israeli and Arab, and I can be Moroccan, French and Arab as well."