The al-Namlah family fled the intense fighting that followed Hamas' truce violation and abduction of an IDF soldier during the summer war, but they did not get far enough.

August 1, 2014, the day during Operation Protective Edge on which IDF Second Lieutenant Hadar Goldin was captured by Hamas, has come to be known in Israel as “Black Friday”. It was, in fact, seen by the Palestinians as one of the darkest days of the summer war in Gaza. The most conservative estimates in Gaza say dozens of Palestinians were killed in the hours following the IDF soldier’s capture, as a result of IAF massive artillery fire during the attempts to isolate the scene and locate Goldin.

Several Palestinian residents of the southermost Gaza city of Rafah were wounded that morning – a large portion of them had no relation to the fighting, yet found themselves out of luck due to their close proximity to the area where the incident occurred.

Very little has been reported in the Israeli media on those Palestinian residents and hell they endured that day. 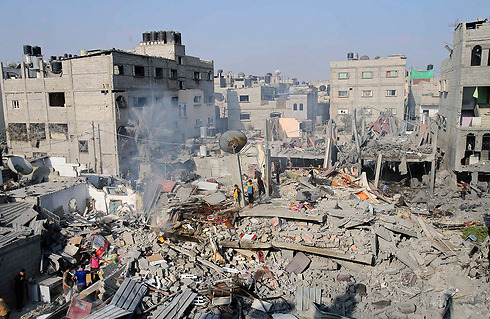 The devastation in Rafah during the conflict. (Photo: Reuters)
Wael al-Namlah, 26, a married father of two, was one of those unlucky Palestinians. That same Friday morning, al-Namlah and his family were optimistic following a ceasefire announcement, and could not predict the terrible violence that was still to come. “During those days, my sister, brother and his family stayed with us because they were scared and we wanted to be close to one another,” al-Namlah tells Ynet. “We woke up with a good feeling because we knew that the ceasefire was about to start, and we planned to go to the market to buy groceries and food, after several days of not being able to leave the house. But then everything was turned on its head,” he says. Al-Namlah and his family did not know that just two kilometers from their home, the ceasefire had been violated in an incident that led to the deaths of recon company commander Major Benaya Sarel, Staff Sergeant Liel Gidoni, and Second Lieutenant Goldin.

The explosions that came in the aftermath of the incident happened close to the al-Namallah home, and soon after two artillery or tank shells landed nearby. Debris from the explosions hit the entrance to their building and the stairwell. “The children began to cry and shake,” says al-Namlah. “We realized that we needed to flee, to get far away. We picked up the children and left the building. There were more people in the street. “You run as a group – everyone and his family – and you see others escaping too,” he says. “You see the hysteria of the children, destruction, and mushroom clouds, and you try to get as far away from them as you can." The family managed to get 600 meters away from their home when they heard an explosion. Two rockets launched from IAF aircraft hit the family. “It was a direct hit. Not next to us, not on a car, not on a home. The rockets hit us,” he says. The outcome was catastrophic. Al-Namlah’s 11-year-old sister Nagham, his brother Yusef and Yusef’s wife were all killed. Two of his brother’s children were seriously wounded. Al-Namlah had one leg blown off, as did his three-year-old son Sharif. His wife Asraah lost both of her legs. Al-Namlah’s daughter Shahd suffered multiple burns – but she was the only family member who did not have any limbs severed. 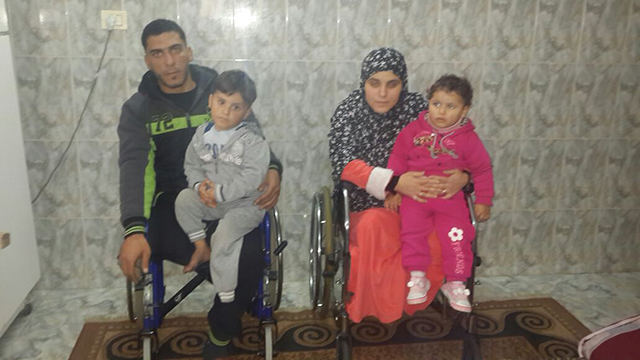 The al-Namlah family today. 'We need help.'
According to accounts from inside Gaza, it took several minutes for the wounded to be evacuated. The first ambulance, which only managed to reach the area after 15 minutes later, evacuated the children first. Ten minutes later, another ambulance arrived to collect al-Namlah and his wife. A third ambulance took al-Namlah’s brother and his wife – who were still alive at the time. A fourth ambulance came to gather those who had died.

Wael was unconscious for five days, unaware of the fatalities and injuries among his family. He was taken to hospital in Rafah and later transferred by the Red Cross to a medical center in Khan Yunis. Because of their serious condition, he and his wife were ultimately transferred out of Gaza. Wael was taken to the Makassed Hospital in East Jerusalem and Asraah to the Government Hospital in Hebron. At the hospital in East Jerusalem, al-Namlah underwent five surgeries on his severed leg and on his stomach. He also was given skin implants on his left leg. After two months in hospital, he was returned to the Gaza Strip. Wael’s brother Yusef was a pharmacist and the family's primary breadwinner. The rest of the family is now left without an income and faces a long rehabilitation process, although they do not know when this will begin, either for themselves or for their children. "We need help to get out of Gaza and receive medical treatment anywhere possible, because in Gaza the hospitals are unable to take care of us,” says al-Namlah, who is now in a wheelchair. “I ask anyone who can to help us – to take us for treatment in Israel or a European nation that can to deal with the kinds of injuries we have. But I am not optimistic. Half of my family was wiped out even though we had no weapons nor threatened anyone. We have no money and no one to help us,” he says.

Between IDF claims and conduct

On Sunday, Physicians for Human Rights released its report on Operation Protective Edge, penned by a delegation of medical professionals who were in Gaza during the war.

The report states that the Israeli alert system failed during the operation, and Palestinians who were not involved in the fighting had no way to escape the bombings. Furthermore, the report says, the system of evacuation within the Strip was disregarded, leading to a rise in the number of wounded civilians as rescue personnel were also wounded. The report states that advance warnings by the IDF, including phone calls, leaflets and the “knock on the roof” procedure were ineffective. Several homes - and residents who were fleeing their homes - were hit by explosions, the report says, and in a number of cases powerful explosives were used indiscriminately and in copious amounts. The report states that during the fighting, medical teams were hit despite being entitled to special protection. According to statistics by the World Health Organization and the Palestinian Health Ministry, 23 medical personnel were killed during Protective Edge and another 83 were wounded. Furthermore, 45 ambulances were damaged or destroyed and 17 hospitals were hit by explosions. The report does not, however, address IDF claims that some rockets fired at Israel originated from Gaza hospitals. The report also claims that despite coordination between the IDF, Red Cross and Red Crescent, there were several instances when evacuation of the wounded was not made possible, and sometimes delayed by many hours, causing many to lose their lives or lengthening the suffering for many wounded Palestinians. “The report points to a gap between the army’s stated commitment to the maintenance of human life and its conduct during the fighting that led to thousands of dead and wounded and left the residents of Gaza with no safe space for them to find shelter,” the Physicians for Human Rights organization said. The organization sent the report to Prime Minister Benjamin Netanyahu, and demanded that he appoint a government committee to independently investigate the events of and the orders given during the war. The Military Advocate General (MAG) will soon decide whether to open a criminal investigation into the conduct of IDF troops on “Black Friday,” specifically the employment of the Hannibal Directive in Rafah by Givati Brigade commander Colonel Ofer Winter. The Hannibal Directive involves the massive use of firepower in order to rescue a captured soldier, even at risk to his life. 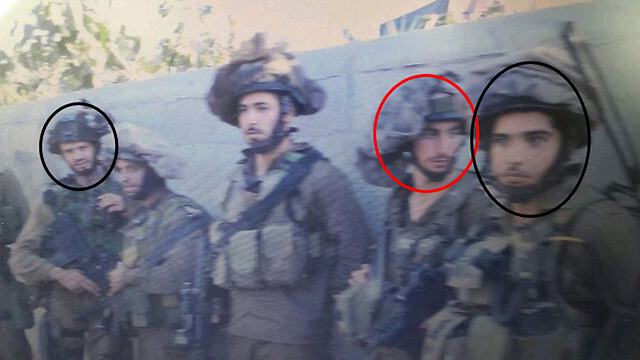 Circled, from left: Hadar Goldin, Benaya Sarel and Liel Gidoni. The deadly Hamas attack on their force triggered a massive wave of IDF firepower. (Photo: Yoav Zitun)
An investigation has revealed that the IDF did in fact employ the Hannibal Directive, which is more permissive in terms of opening fire in populated areas. The troops claimed during the investigation that they had fired on marked and identified terror targets. The MAG is set to decide whether the shooting was reckless and unjustified, despite the exceptional circumstances.

The IDF said in response that, "The report was not submitted for IDF consideration before its publication. It is clear that a comprehensive response from military officials would have resulted in the removal of the numerous incorrect and biased data included within it. The report is based primarily on one-sided, inaccurate and substandard information from sources with a preexisting bias against Israel. The sweeping conclusions of the report and the problematic methodology it uses cast a dark shadow over the content and its reliability."

Furthermore, the army said, "during Operation Protective Edge, the IDF acted to warn the residents of the neighborhoods in which maneuvers were to be carried out by various forces, and gave warning to civilians before attacks on military targets that could have caused collateral damage.

"Throughout the operation, the Coordination and Liaison Administration for Gaza at the Erez crossing was in constant and close contact with local and international health officials in Gaza. This was in order to coordinate, among other things, the activities of medical personnel on the ground."

The IDF also pointed out that, "Under the circumstances of intense fighting on the ground, we made great effort to allow emergency and rescue teams access to local citizens affected by the fighting, and their speedy and safe evacuation from the area.

"Requests for such coordination were examined individually on the grounds of medical circumstances and with attention paid to the fighting on the ground, including the risk to our forces and the personal safety of emergency and rescue teams, and the utmost effort was made to allow the implementation of these evacuations."