Sgt. Lihi Meir is being cited for outstanding military service during Gaza war, but she refuses to make peace with what she describes as an award with a sexist undertone which she will recieve for 'maintaining composure.' Her response:‘We are not hysterical.’

Sgt. Lihi Meir (res.), 20, is set to receive an IDF citation for outstanding military service for her work as an electronic observation handler (a lookout) during Israel’s 50 day war with Hamas in Gaza, during which she spotted a group of terrorists dressed as IDF soldiers who had succeeded in infiltrating Israel.

However, Meir refuses to keep quiet in face of what she describes as a sexist undertone in the IDF’s reasoning for giving her the award, which she is set to receive with Sgt. Ronnie Jackson and Corporal Noah Teitel, two other female electronic observation handlers. 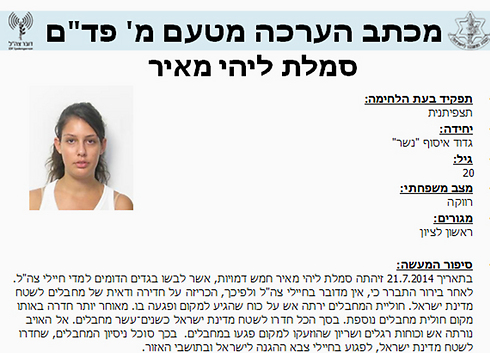 According to the IDF’s Medals and Citation Committee, the soldiers are being honored for “maintaining their composure” – a claim that Meir thinks would not have been raised for a man.

“It upsets and angers me… the same way we expect our combat soldiers to ‘maintain their composure' and keep their cool, then we should expect it from female electronic observation handlers,” Meir said.

She stresses that she is very honored by the IDF’s decision to cite her and while the reasoning that the citation is given to the soldiers because they "maintained their composure" was not attributed to her, it was attributed to the two other soldiers. Meir says that because this is the first time the honors are being handed out for the electronic observation handler position, it's important it be framed in a way that respects both the soldiers and the position. 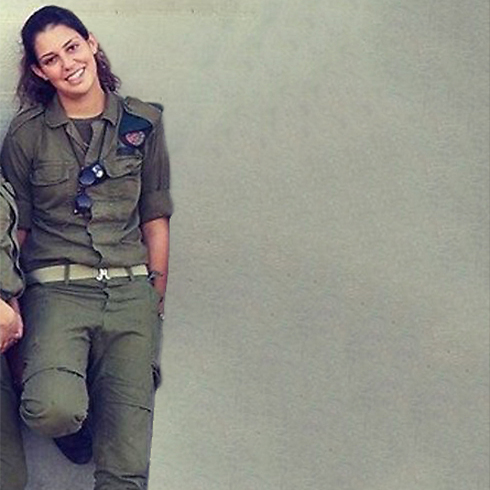 Sgt. Lihi Meir
“It is in no way trivial that they decided to give out this citation, this wasn’t the case in previous wars and operations, but if they do than it shouldn’t be belittling and offensive,” she said. Sgt. Eden Bell (res.), 20, who serves alongside Meir, made similar claims: “We sit in front of the screen for long hours, and like male soldiers are in charge of a certain region, so are we. There is no reason in the world we would lose our composure. If we had, the incident would have ended with bloodshed.” According to them, the letter of citation entails a form of sexism: “Because women usually fill this position, then the perception is that they are hysterical, I guess someone thinks that because we sit in a war room and are not in the field then we stress easily. That is simply not true.”

The ceremony is slated to take place at the end of February and the soldiers urge the IDF to change the wording of the honor.

Meir, an electronic observation handler, from the observation unit in the "Nesher" battalion, was honored for her actions on July 21, 2014. Sergeant Meir identified five Hamas terrorists who infiltrated Israel and disguised themselves with IDF uniforms.

Later on that day, another group of Hamas terrorists infiltrated Israel in the same location. Again, Sergeant Meir identified the group and reported to her commanders. Infantry forces and tanks arrived at the scene and a gunfight ensued, and prevented them from murdering Israeli soldiers and civilians.

Jackson, also an electronic observation handler, from the "Nesher" battalion, received an award for her actions on July 17, 2014.

Sergeant Jackson identified a group of 13 Hamas terrorists which infiltrated Israel through a terror tunnel, near Kibutz "Sufa", on the Israeli-Gaza border. Jackson reported her findings to her commanders, which led to a successful Israeli response that prevented the terrorists from killing Israeli soldiers and civilians

Corporal Teitel, also an electronic observation handler, but from the Navy, was honored for her actions on July 8, 2014. Teitel identified a group of Hamas terrorists which infiltrated Israel by sea, near Kibbutz Zikim, in the Hof Ashkelon Regional Council.

Corporal Teitel informed her commanders, and participated in the coordination between Navy and Infantry forces that arrived on the scene. Corporal Teitel's actions enabled Israeli forces to stop the maritime terror attack.

Lieutenant Dr. Regina Pekman, a medical officer in the 188 Brigade, received a citation for her actions on July 31, 2014. Lieutenant Dr. Pekman arrived to a deployment area in Israel, which was bombarded by mortar shells.

She commanded the evacuation of injured IDF soldiers, while providing medical treatment for many other Israeli soldiers which were wounded. All through the incident, "Code Red" alarms were heard, and the entire area was under rocket fire.