Book of horrors: Nazi camp survivors in US recall Auschwitz

At 20 years old, Hy Abrams detailed his haunting experiences in Auschwitz and other camps in a little blue book; Golda Pollac would snatch blades of grass on her way to hard labor to ward off starvation.

In a little leather book, the kind some men use to list lovers, Holocaust survivor Hy Abrams keeps the names that still haunt him: Auschwitz, Plaszow, Mauthausen, Melk and Ebensee.

It has been 70 years since the Soviet army liberated the Auschwitz concentration camp in Poland, where Abrams was taken at age 20 by German Nazi soldiers and separated from his mother, father, brother and three sisters.
Memoirs of Survivor
70 years after Auschwitz liberation, a survivor remembers
Associated Press
Marta Wise, who was pictured in famous photo of children behind barbed wire, is one of the few remaining survivors who were actually there when the terror in Auschwitz finally ended.
70 years after Auschwitz liberation, a survivor remembers

"At night I saw the chimneys and the fire and the smoke," Abrams said, glancing at the tiny midnight blue book that contains details of his living nightmare, including him asking a fellow prisoner about the inferno that smelled of meat.

"'That fire,' he says, 'is where your father and your family went,'" recalled the Czech native, who never saw his parents again. 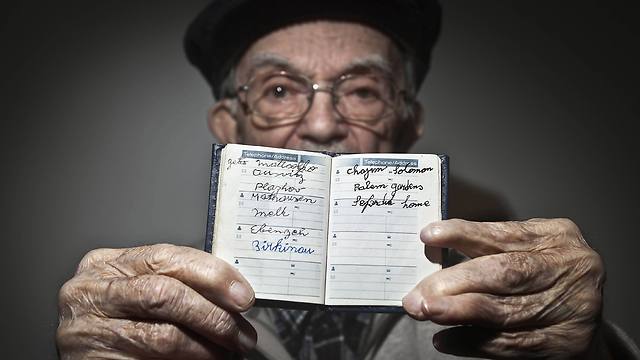 Hy Abrams and his leather book (Photo: Reuters)
First-person accounts of the horror, as told by living witnesses, are becoming more rare with each passing year. Abrams, at 90, is among the oldest of a dwindling population of Holocaust survivors who gather each week at a Brooklyn synagogue to share stories, and perhaps lunch and a dance or two. Even seven decades - filled with marriages, children and careers - will never blunt the terror they lived through.

Most of the 114,000 survivors living in the United States are in the New York metropolitan area. With an average age of 79, they are poor and in need of special help as the result of stress and malnutrition, said the UJA-Federation of New York, which supports the Brooklyn gatherings organized by Selfhelp Community Services. 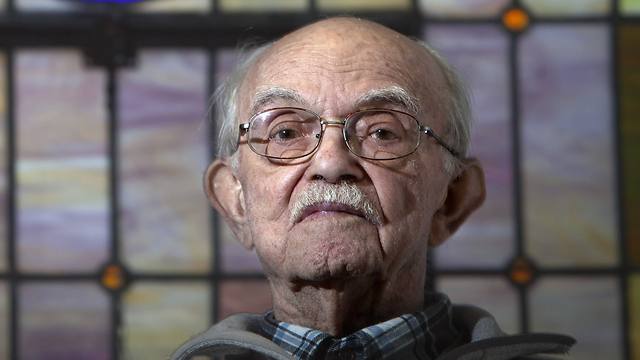 Hy Abrams (Photo: Reuters)
About half the survivors of Nazi camps and wartime ghettos have died in the last decade and about half of those who remain are expected to pass away in the next seven years, said Hillary Kessler-Godin, spokeswoman for the Conference on Jewish Material Claims Against Germany. Battling horrific memories, many hoard food and are unable to trust. Some refuse to take showers, as that was a commonly used ruse to get prisoners to enter gas chambers. For Abrams and for Golda Pollac, 89, survivors of several camps, including Auschwitz, the liberation anniversary is a time not for celebration but for grappling with loss and sadness.

Pollac was 19 when her family was taken to Auschwitz from Romania. She and her parents were separated, never to meet again. 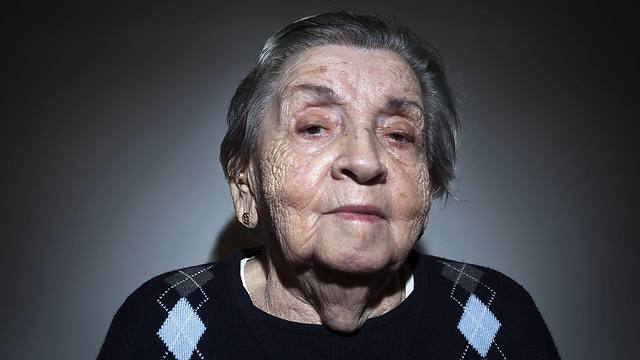 Golda Pollac (Photo: Reuters)
With hair shorn and her name exchanged for a number, she was sent to Buchenwald camp in Germany, where she worked in an airplane factory. During forced overnight marches, she snatched blades of grass to ward off starvation. "I (would) say, 'Here is the heaven and here is the hell. And we are now in the hell,'" she said of the camps. "This is what I say and with this I go until I (was) liberated because here people do everything." Buchenwald was liberated by US forces in April 1945. Some 6 million Jews as well as ethnic Roma, homosexuals, the disabled, and political opponents were put to death by Nazis during World War II, often in forced labor camps. A group of European heads of state are due to gather on January 27 at the Auschwitz camp for ceremonies to mark the 70th anniversary of its liberation. The ink bleeding on the pages of Abrams' little book spells out the torment that began in Auschwitz in 1944, and led to the Plaszow camp in Poland, where he made footwear for the German army and Mauthausen camp in Austria, where he toiled in a quarry. Prisoners were made to haul enormous rocks up what they called the "Stairs of Death," according to Patricia Heberer Rice, a historian with the US Holocaust Memorial Museum in Washington, DC. 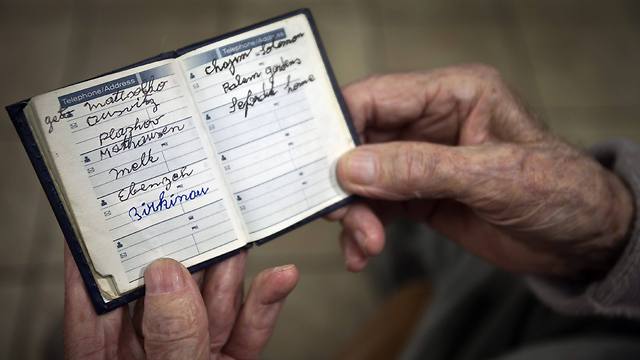 Hy Abrams' leather book of horrors (Photo: Reuters)
On his way to Plaszow, Abrams recalled seeing his three sisters. Bald and emaciated, they looked nothing like the beauties they once had been. One called out to him asking about their mother, but he never answered.

"I was so depressed, I couldn't even look from where that voice came," he said in a voice choked with emotion. "That lives with me."

Eventually, Abrams ended up in Austria's Melk camp, where he made parts for German planes. By April 1945 he was among prisoners forced to march more than 100 miles (167 km) to Ebensee camp, where a month later, US forces liberated them. "I was so weak," said Abrams as he remembered stumbling into a building, where he found fresh lettuce. "I didn't see green for over a year. I went over and started to eat. Even now, I'm crazy for this green." He soon returned to his hometown in Czechoslovakia to learn that only about 30 people from the 100 Jewish families there survived - including his brother, whose whereabouts at the time were unknown. Abrams later learned his brother emigrated to Israel, and has since visited him a dozen times.