Naftali, left, and his brother, Shmuel

An 82-year-old Holocaust survivor, now living in Haifa, goes back to Nazi extermination camp in Poland to mark 70th anniversary of its liberation.

On Tuesday, as the world marks International Holocaust Memorial Day, Naftali Furst will return to Auschwitz to attend a ceremony marking the 70th anniversary of the liberation of the extermination camp.

Furst, now 82 and living in Haifa, was a boy when he suffered the horrors of the Nazi genocide. After being imprisoned in the Auschwitz death camp with his brother, he was forced to join the death march to the Buchenwald concentration camp towards the end of the war, as the Nazis retreated from Poland. It was there that he was liberated by Allied forces.

Furst, born in Slovakia, was taken with his family to the Sered labor camp in that country. They survived until the end of 1944, when the family members - Naftali, his older brother Shmuel, and their parents - were taken to Auschwitz. The children were separated from their parents and were put in Block 29, known as the children's block. 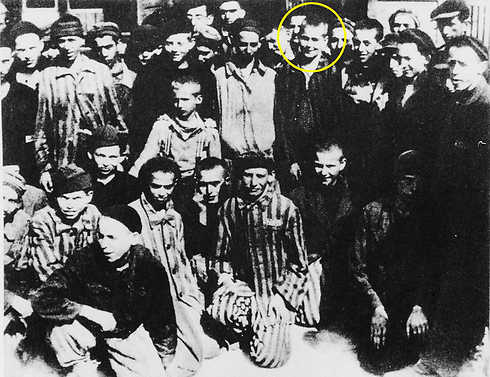 Naftali Furst, circled, at the liberation of Buchenwald.

In January 1945, shortly before the liberation of the camp, they were marched and then transported on a train open to the bitter snow and wind, into Germany.

"In Auschwitz they murdered with gas chambers and slave labor," he recalls, "and in Buchenwald with starvation and filth."

For decades after the war, Naftali never told his story. In 1999, he and his borther published their memoirs online, including the story of his extensive family. In 2005, to mark the 60th anniversary of the liberation of Buchenwald, he returned to Germany - and that opened the flood gates of memories and stories.

"I gave the Germans a kind of pardon. I thought that after 60 years it's not the same generation, and I began to tell the stories," he says. "We are the survivors, the coals that were not burned in the great fire. It is the last time that we will be able to tell our story and pass it on to future generations, because there are not many people left to tell it."

Naftali, who appears in pictures taken during the liberation of Buchenwald, is a member of an organization of the camp's survivors, and often tells his story to young people and adults in Germany and Eastern Europe. 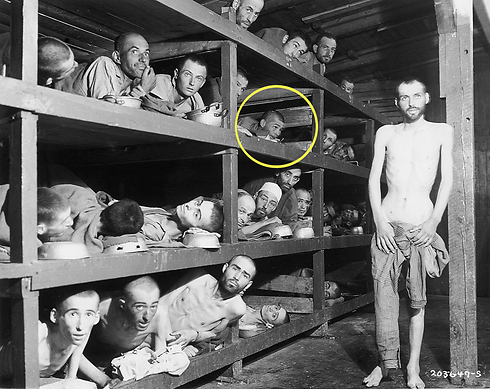 Fuerst on his bunk. 'There are not many people left to tell the story'

"The thirst to hear is greater there than in Israel," he says. "I talk about what I went through to teachers, students, lawyers and judges. Sometimes I ask them, why didn’t your grandparents tell you what they did during those years? But words cannot adequately describe the real feelings. Words cannot express the hunger, fear, horror, separation from one's parents, death - even if I speak for thousands of hours."

'To feel just a fraction'

"Once I did an exercise for university students in the city of Aachen. I rearranged the tables so the room only had the space of a train car. And I asked the students to crowd into this area. I reminded them that we were 80-90 people in this area," he says.

"After 5-6 minutes they began to feel uneasy. We travelled like that for days, crowded together, exposed to the snow and the cold. On one occasion when I came with students from Israel, I wanted to invite them to take off some of their warm clothes for a few minutes there in Auschwitz, to feel ever so slightly the outside temperature. The problem that day was that the sun shone." 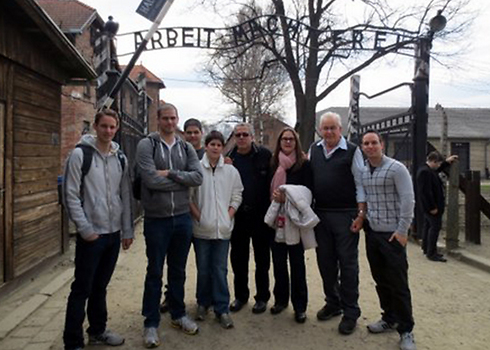 Naftali with his family at Auschwitz

Accompanying Naftali on the journey to Poland was his partner, and his daughter, designer Ronit Furst.

"The official journey appeals to me less than personal, private ones," Ronit says. "But my father is very proud to attend such an event with his daughter. Just the journey to somewhere that carries the name 'Auschwitz' is significant."

Ronit adds: "A 'family roots' trip we took a few years ago was real closure. For him it was especially important, like a victory. He showed us all the places he had been. He said if someone had told him then, as a child, that he would one day be there with his daughter and grandchildren, maybe it would have been easier for him."

The Israeli delegation to the international ceremony marking the liberation of Auschwitz will include 37 survivors from Israel and another hundred from around the world. Heads of state from Poland, France, Germany, Austria, Belgium, the Netherlands and Croatia will also attend. The Israeli delegation was organized by the World Jewish Congress, in collaboration with the Center of Organizations of Holocaust Survivors.

"It is a great privilege for the World Jewish Congress to accompany such a large group of Holocaust survivors on this historic journey to Auschwitz," says Robert Singer, the CEO of the Congress.

"This is probably the last major commemorative event that will include those who experienced the Holocaust firsthand, and we must ensure that from this ceremony the voices of the survivors will continue to reverberate for generations to come."