Court rejects injunction request by organizations and leaders in the Arab sector seeking to stop sale of issue; 550 copies sold on Steimatzky's site in seven minutes.

The controversial special issue of French satirical magazine Charlie Hebdo was sold online on Monday by the Steimatzky bookseller chain, as the district court in Haifa rejected an urgent injunction opposed to the sale.

The injunction request was submitted to the court on January 25 by attorney Mohammed Suleiman Agbarieh. 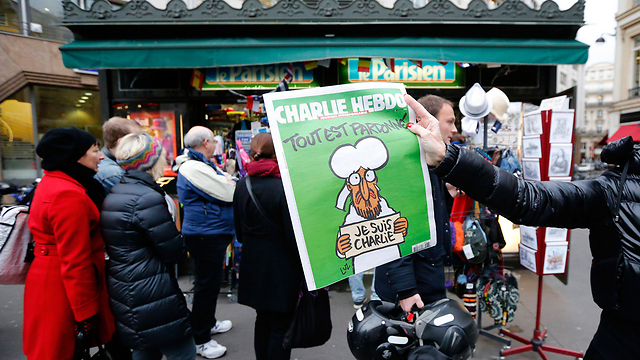 Cover displayed as crowd lines up to purchase issue in Paris earlier in January (Photo: Reuters)

Those requesting the injunctions included were the Mezan Center for Human Rights, the Iqra Foundation to promote education in the Arab sector, and the mayors of Sakhnin, Umm al-Fahm, Kafr Qara, and Ar'ara.

Steimatzky received a letter on January 22 asking it to cancel the launch event it planned at the Ayalon shopping center. Steimatzky decided to move sale of the issue online, but some opposed that as well.

Sales of the issue began at 5 pm (3 pm GMT) on the bookseller's site. 550 issues sold within 7 minutes before the sale ended, Steimatzky said,. 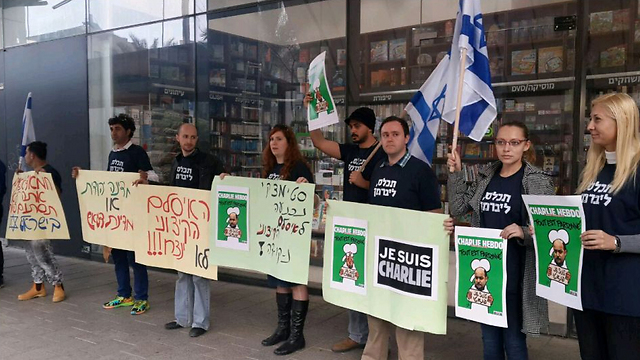 The request submitted to the court argued that the issue's cover illustration could hurt public sensitivities and is "slander against any Muslim".

On Saturday MK Masoud Ganaim (Ra`am-Ta`al-Mada) warned Prime Minister Benjamin Netanyahu that he and Steimatzky would be responsible for the consequences of selling the issue.

Yisrael Beytenu leader Avigdor Lieberman said Sunday that his party's volunteers would purchase thousands of copies of the issue and distribute it for free around Israel.

The first edition published after the killings of the magazine's cartoonists and editors in Charlie Hebdo's Paris office was sold across the world; seven million copies were printed by the publisher. The print run of the issue was expected to continue for several weeks