It's over: Jewish National Fund and Israel finally agree to part ways

The Jewish National Fund is in the practical stage of parting ways with the State of Israel and the Israel Land Administration, due to what the JNF says are repeated infractions by the state.

Over the past few days, JNF director general Meir Spiegler and the director of the JNF's Land Conglomerate, Alex Hefetz, have held a series of meetings with senior Housing Ministry officials, including Minister Uri Ariel and his director general, Shlomo Ben Eliyahu, with the objective of setting up teams to coordinate the process and supervise the transfer of information between the parties.

According to Spiegler, the process will be completed by July 29 this year.

Calcalist has learned that during the course of the negotiations between the parties, and in an effort to smoothen the process, the JNF, founded in 1901 by the World Zionist Organization, has agreed in principle to give up land it owns and for which plans are already in the ILA pipeline, in return for land in other areas of the country, in the Negev and Galilee in all likelihood.

The current separation process, whether completed in keeping with Spiegler's assessment or not, is a historical one: Since 1961, the JNF, which owns approximately 13 percent of the state's land (close to 650,000 acres, mostly in high-demand areas in central Israel), has not been responsible for planning and marketing at all. 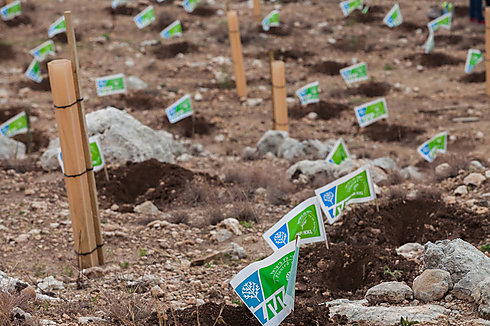 For the past 54 years, these operations have been carried out exclusively by the ILA, which manages the JNF's land inventory and transfers to the JNF around NIS 1 billion a year – the sum of the transactions. The parties, by the way, are involved in a dispute regarding this sum, with the JNF charging that it is not a true reflection of the land deals.

In return for allowing the state to manage its land, the JNF, defined currently as a community interest company, is exclusively responsible today for all of the country's forest regions – approximately 370,000 acres, of which the JNF actually owns around 25 percent.

The JNF also has a subsidiary, Himnuta, established in the 1930s but has been operating over the past decade as an entrepreneurial land-development company, which owns close to 10,000 acres of land across the country. The JNF is expected to take advantage of Himnuta's experience in the field when it comes to planning and marketing operations related to the land it gets back from the ILA.

Spiegler says the reasons for the breakaway from the state are "purely professional ones" and stem from the fact that the state is frequently responsible for violating its agreements with the JNF.

"For years now, we have been complaining about these violations, which cost us hundreds of millions of shekels a year, and saying that they don’t share the details of the transactions with us, but nothing is done about it," Spiegler notes. "From our perspective, therefore, the move is underway and we are already prepared for it."

The JNF's breakaway announcement comes during a very sensitive period in which ILA chairman Bentzi Lieberman is under investigation on suspicion of fraud and breach of trust and is not actively managing the affairs of the body at this point in time. Furthermore, Israel is in the throes of an election campaign, and the state may ask the JNF to postpone its final decision on the separation until a new government is formed. JNF officials insist, however, that they are going ahead as planned despite the problematic timing.

According to Spiegler, the JNF's separation from the state will lead to increased competition in the real-estate market and a drop in housing prices, "because we will promote the marketing of land and land betterment for public buildings, commercial structures, residential properties and industrial facilities more efficiently and expediently than the ILA's current system. This of course will prompt the ILA to become more efficient – for example, when it comes to the process of issuing tenders for the marketing of land."

Spiegler rejects claims that the breakaway could affect the allocation of land to the Arab population.

"We won't harm minorities," he says. "And the World Zionist Organization has already decided not to change the land management policy. Thus, the public at large will benefit from the breakaway. The monies we receive from the land will not go to dividends, but will be channeled into national projects instead."