After difficult year, infantry brigade stands out in commendations ceremony for operational activity during Operation Protective Edge, with 13 citations granted to Givati soldiers

The Givati Brigade holds the distinction of being the most decorated unit for its outstanding service in Operation Protective Edge, with citations and medals awarded to thirteen soldiers from the infantry brigade in a commendations ceremony held Monday. The highest decoration – the Medal of Distinguished Service – was awarded to Lieutenant Eitan Fund, who led a force of four fighters, officers and soldiers into a terror tunnel in an attempt to save the life of Lt. Hadar Goldin.

2014 was a particularly difficult year for the unit. It began with a Gaza border incident in which IDF Captain Tal Nachman was killed by friendly fire, continued with the losses of fighters in the Gaza war, and proceeded with the embarrassing affair that led to the removal of Lt. Col. Liran Hajbi from his position as the Tsabar battalion commander, following allegations that he sexually harassed soldiers. Another tragic incident occurred last week, when Major Yohai Kalangel and Staff Sergeant Dor Nini were killed in a Hezollah attack on the Israel-Lebanon border. 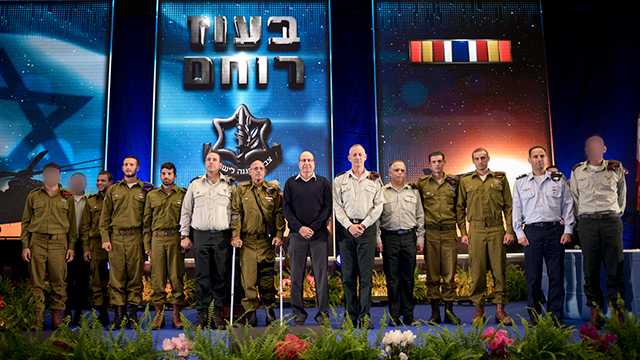 Gantz and Ya'alon with the decorated soldiers and officers (Photo: IDF Spokesman)

On Monday, the brigade became the most highly decorated unit for its activities in the Gaza military operation, with 13 medals and a special Letter of Commendation granted to Givati Brigade's Tzabar Battalion. Soldiers in the Givati brigade participated in advanced stages of the ground phase of Operation Protective Edge, uncovered tunnels in the southern Strip and killed dozens of terrorists.

Only 2 citations given to IAF

IDF's Paratrooper Brigade, which operated in the southern Strip, received seven citations and awards. The Nahal Brigade, whose soldiers were the first to enter the Strip in a ground maneuver, received six citations.

The Gaza operation brought to the forefront the IDF armored divisions, with four of the corps' brigades honored with 15 medals and awards. The armored brigade to receive the highest number of citations was the 188th "Barak" (Lightning) Armored Brigade, whose fighters fought with relatively outdated Merkava tanks, dozens of which were temporarily disabled during the operation due to malfunctions.

Israeli Air Force combat squadrons were not included among the recipients of citations, despite their wide participation in the military operation. Two units among the IAF units were honored: The Air Force's special search and rescue division Unit 669, which received a citation, and the IDF's Iron Dome unit, which received the Chief of Staff Medal of Appreciation. 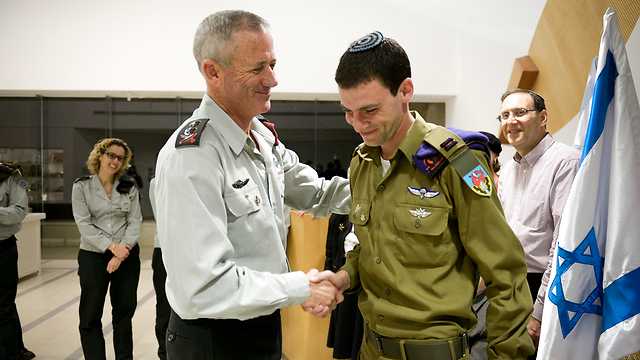 Defense Minister Moshe Ya'alon, the members of the General Staff and other army generals attended the ceremony.

Six of the soldiers being decorated fell in battle - the highest-ranked of them is Lieutenant Colonel Dolev Keidar, the Geffen Battalion commander, who was awarded a Head of Regional Command (Aluf) Citation.

Among the decorated were four women. Lieutenant Dr. Regina Pekman, a medical officer in the 188 Brigade, received a citation for commanding the evacuation of wounded IDF soldiers and providing medical treatment.

Three units were granted the Chief of Staff Citation: Maglan, the mechanical-engineering battalion, and Sayeret Matkal. The explanatory notes for Sayeret Matkal's citation said that "in its activities during the campaign, it showed determination, a fighting spirit, initiative, and aggressiveness." 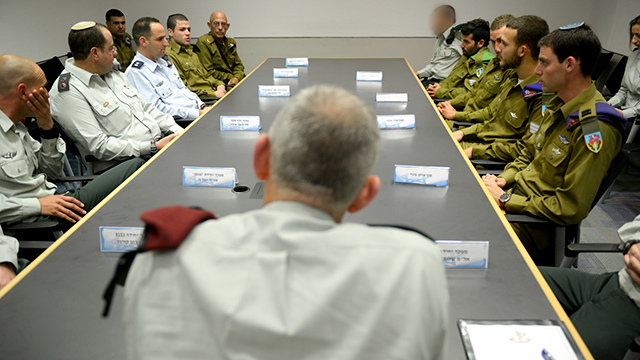 The mechanical-engineering battalion, composed of both conscript and reserves soldiers – some of them volunteers – operated instruments to locate terror tunnels and destroy them. "The battalion's fighters took part in scores of missions, in which they uncovered terror tunnels and were often under fire from terrorists. The battalion's contribution to the removal of the terror tunnel threat from Israel's residents and IDF soldiers was immeasurably great and significant, considering the unit's size."