Prime Minister Benjamin Netanyahu visited Israel's border with Syria Wednesday and said that Iran was trying to use the civil war ravaging in Syria to open a new front against Israel.

He made the comments during a visit to the IDF's Hermon Division in the Golan Heights a week after a Hezbollah attack that killed two Israeli soldiers in retaliation for an Israeli airstrike that killed six party fighters and a top Iranian general in Syria's Golan Heights 10 days earlier. 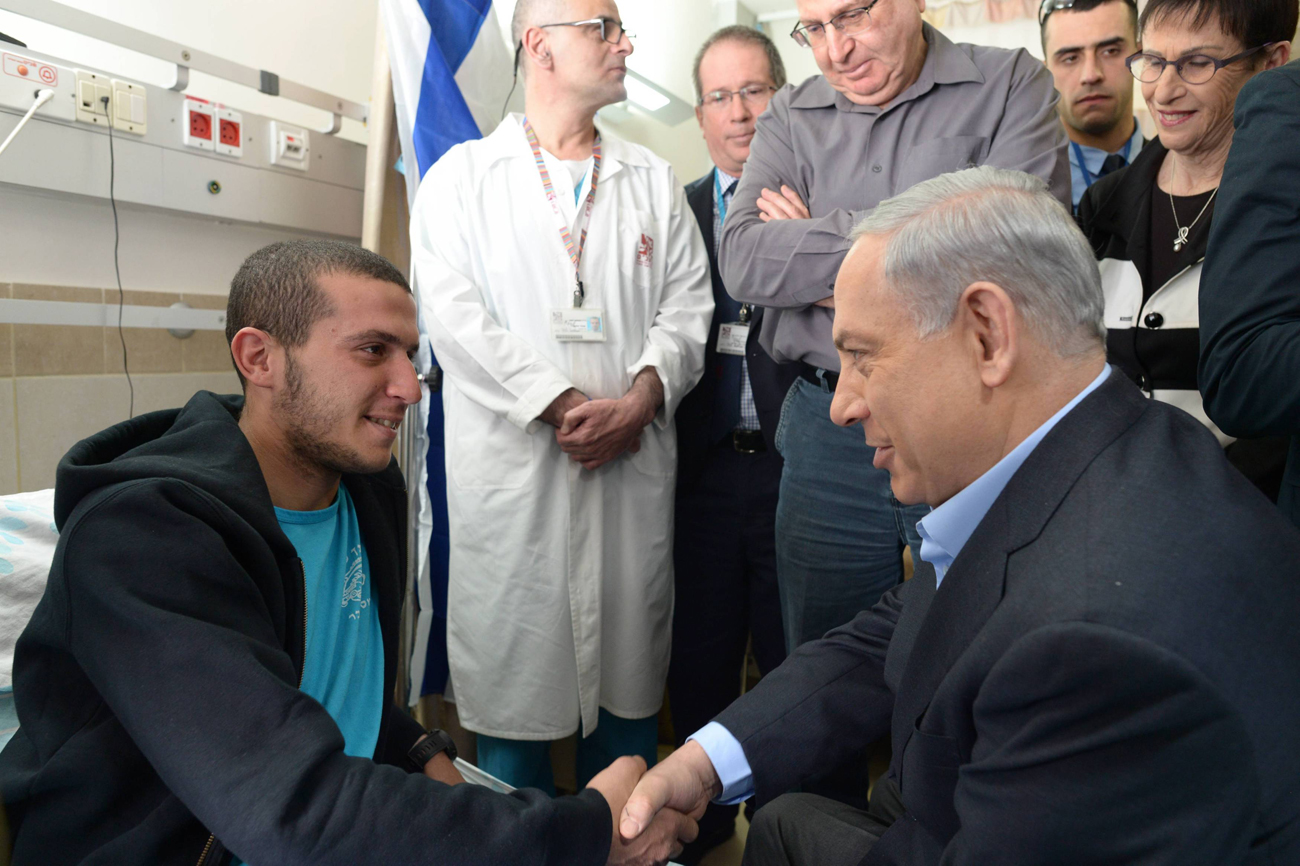 Netanyahu visits wounded soldiers in north (Photo: Amos Ben Gershom, GPO)
"For some time Iran is trying to open a new front here (Syria), in addition to the one it has already opened in southern Lebanon and in Gaza," Netanyahu said, alluding to Iran's backing of Hamas in the south as well as Hezbollah activities in southern Lebanon and Syria – where it is fighting alongside Syrian regime forces.

Netanyahu sent his condolences to the Jordanian government and people for the loss of a pilot who was burnt to death by the Islamic State group, but continued to attack Iran, comparing it to the Islamic State.

"I wish to send my condolences to King Abdullah (of Jordan) and the Jordanian people in wake of the horrific murder of their Jordanian air force pilot. The Islamic State of daesh (ISIS' Arabic acronym) burns people alive, and in the Islamic republic of Iran they hang people in city squares," said Netanyahu. On Wednesday a top Iranian general admitted Iran exported its arms production know-how to Hezbollah and Palestinian groups.

“The Islamic Republic of Iran has helped Iraq, Syria, Palestine and Lebanon’s Hezbollah by exporting the technology that it has for the production of missiles and other equipment,” Revolutionary Guard Air Force commander Brig. Gen. Amir Ali Hajizadeh told Fars News Agency on Monday.

"They can now stand against the Zionist regime, (ISIS) and other takfiri (infidel) groups and cripple them.” Iran frequently makes unconfirmed claims regarding its military strength and developments, however Monday's comments come amid heightened tensions between the Islamic republic and Israel after a January attack in Syria attributed to Israel saw an Iranian general killed alongside Hezbollah fighters.

Ynet and Alex Fishman contributed to this report