Turkey’s border unlikely to close to jihadists and terrorists

Ankara criticized for the relative ease with which terrorists and would-be fighters are able to go back and forth across the Turkish border into Syria.

Paris terror suspect Hayat Boumeddiene's recent escape from France to Syria has renewed concern about Turkey’s ability and willingness to prevent terrorists from transiting through its territory.

Boumeddiene is the romantic partner and alleged accomplice of Amedy Coulibaly, who was shot dead by police after killing four people in a kosher supermarket and shooting a police officer in Paris on January 9. Airport footage shows Boumeddiene's arrival from Madrid to Istanbul on January 2, and Turkish Foreign Minister Mevlüt Çavuşoğlu said she crossed the border to Syria six days later. Turkey has been the subject of intense criticism from Western governments and commentators over its perceived lack of effort in stemming the flow of foreign fighters crossing its borders. However, some think this isn’t quite fair. 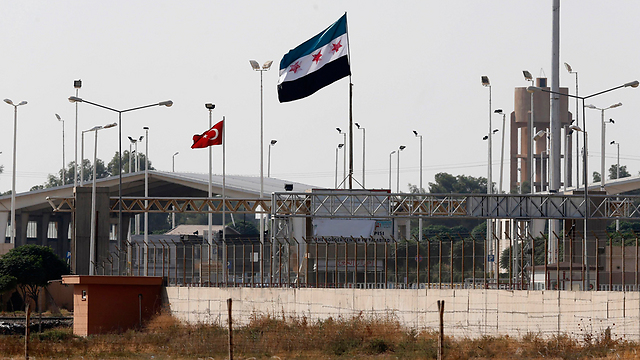 The Turkey-Syria border (Photo: Reuters)
“I think it’s somewhat of a misplaced criticism,” Sinan Ülgen, a scholar at Carnegie Europe told The Media Line. Though the Turkish government may have formerly looked the other way at the activities of Islamist groups because of a desire to bring down the Assad regime at any cost, “that policy by-and-large had changed by April 2014,” according to Ülgen. At that time, Interior Minister Efkan Ala made an effort to enhance border security “having realized the risks of getting into that sort of relationship with extremist groups,” says Ülgen. However, researcher Gareth Jenkins says it’s still very easy for foreign fighters to cross through Turkey. “When you look at the ease with which (terrorists and would-be fighters are) able to go back and forth across the border, there still isn’t a full clampdown,” Jenkins says. “It’s not as easy as it used to be, but it’s still pretty easy.” He says he even personally witnessed fighters in a Turkish village near the Syrian border recently. “There were jihadists sitting around waiting to go across.” With some 40 million tourists visiting Turkey every year, border security is no easy task, but Jenkins says security forces could be doing a lot more. He claims difficulty over border security isn’t the only reason for Turkey’s failure at curbing the flow of foreign citizens seeking to join the ranks of ISIS and other groups. “There is some indication that Turkey is not taking this as seriously as it should,” he says, citing lax airport security in cities such as Antakya near the border with Syria, and a lack of checkpoints. “If two middle-aged men with a wall map they had bought from a stationery store in Reyhanli can find the jihadists then so can the Turkish security forces.” Jenkins speculates that the ruling Justice and Development Party (AKP) and the Islamic State (ISIS) may have some kind of truce. “There seems to be some kind of modus vivendi between Turkey and the Islamic State,” he says. “They have some restrictions but not a real clampdown, either in terms of movements of jihadists, or propaganda. In return, the Islamic State is not directly targeting Turkey.” ISIS was until recently operating very openly in Turkey’s eastern border regions, and the government doesn’t shut down Turkish websites supporting and recruiting for the Islamic State. “If similar websites showed the same level of support for a militant leftist organization or the PKK, access would be blocked,” Jenkins told The Media Line. He also says the European Union (EU) could do more to help Turkey with security, but there are obstacles. “The Europeans don’t really trust Turkey when it comes to sharing information” especially after the government allegedly released 180 ISIS prisoners in exchange for Turkish hostages held in Mosul. “There is a concern that if they give too much information, Turkey may seize people and then let them go,” Jenkins says. Ülgen says Turkey can only do so much without intelligence information from Europe. “As long as Turkey isn’t given the names of specific people who it needs to prevent from crossing into its territory, there’s little that it can actually do.” The Turkish press reported that French intelligence didn’t share Boumeddiene’s name with Ankara, making it impossible to identify her when she arrived in Turkey. Ülgen says the problem is that Turkey’s western partners are hesitant to share intelligence about their citizens and residents because of potential civil rights violations. “Western powers are just now developing the necessary domestic legal instruments to be able to do this more effectively.” Ülgen says incidents such as Boumeddiene’s high-profile escape should provide incentive to increase intelligence sharing and cooperation; “It just demonstrates how crucial timely intelligence sharing is.” Jenkins says that besides the threat of fighters coming from Europe to the Middle East, there’s also a “one hundred per cent” risk of fighters going the opposite direction. Ülgen also warns that more attacks in Europe are “unfortunately likely.” Security forces in the EU aren’t designed for lone wolf attacks such as the recent one in Paris, Ülgen says. Such attacks are harder to detect because there’s no large, easily-detected network. “There’s no structure that can potentially be infiltrated by intelligence agencies,” he says Both experts caution that Turkey itself is at high risk for terrorost attacks. Ülgen says Turkey’s border with Syria – more than 560 miles in length - makes it vulnerable, as does the over 1.6 million Syrian refugees residing in the country, who are at danger of becoming radicalized. Furthermore, Ülgen cautions that there may be well-developed networks of Islamists already in Turkey.

“Before the policy changed in 2014, Turkey had turned a blind eye to the activities of these groups to use Turkish territory as a logistical base to continue their fight against the Assad regime,” he says. During this time, they may have established cells across Turkey, but “we just don’t know.”