Palestinians believe that Israel will not pass tax and custom revenues collected on behalf of the Palestinian Authority until after March elections in move likely to damage Palestinian economy.

Israel is set to announce that it will confiscate an estimated $100 million in taxes and customs revenues it collects on behalf of the Palestinian Authority, Palestinians say, claiming Israel will not transfer funds until after the March elections.

The move follows one taken a month ago after the Palestinian Authority announced it had applied to join the International Criminal Court (ICC), which means Palestinians could ask the court to indict Israeli officials for war crimes. 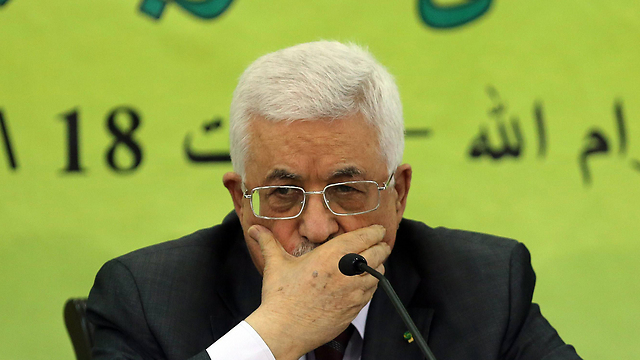 Palestinian President Abbas (Photo: AFP)
The tax and customs revenues provide about 60 percent of the Palestinian Authorities monthly budget, used mostly for salaries for tens of thousands of civil servants in the West Bank and Gaza Strip, including teachers, nurses and policemen. “The whole economy feels it when the salaries are not paid in full,” Said Haifa, the chairman of the department of economics at Bir Zeit University told The Media Line. “People are not able to meet their commitments and cover their expenses.” Many civil servants have taken mortgages, he said, a relatively new phenomenon for Palestinians. While the banks may be forgiving for a month or two, understanding that their clients have not been paid, it will soon affect the banks liquidity, he said. “This is not Israel’s money,” he said. “This is Palestinian money, and it should not be affected by our legitimate struggle to end the (Israeli) occupation. It has nothing to do with the ICC.” Several Israeli officials were unavailable for comment. The Israeli decision will also affect the Gaza Strip, where some 70,000 Palestinian civil servants have continued to receive salaries since 2007 when the Islamist Hamas movement took over Gaza and relations soured between Fatah, which controls the PA and Hamas. Electricity blackouts are common in Gaza, where few of the thousands of homes destroyed in the latest round of fighting with Israel last summer have been rebuilt. The United Nations recently announced it was suspending reconstruction efforts to rebuild Gaza because donor pledges have not arrived. Palestinians in Gaza find it difficult to leave the overcrowded Strip as both Israel and Egypt frequently close the borders. “Many in Gaza already have no money and there is not even electricity all the time,” a Palestinian civil servant who works in communications told The Media Line on condition of anonymity. “This will just make it worse.” The PA already owes the Israel Electricity Company almost $500 million and has threatened to cut off the electricity to the West Bank for several hours each day. Said Haifa says that the move to freeze the tax revenue could eventually affect the Israeli economy as well. Two-thirds of all goods imported into the West Bank come from Israel, for a total of more than $1 billion annually. If the Palestinian economy comes to a standstill, it will be unable to buy these goods from Israel. In the past, Israel has released the customs and tax revenues after a few months due to international pressure. This time it comes as Israel is in the midst of an election campaign, and could become an issue in the campaign.

Republished with permission from The Media Line