Uruguay has expelled a senior Iranian diplomat over last month's planting of a dummy bomb near Israel's embassy in Montevideo, Israeli daily Haaretz reported on Friday.

Citing an unidentified "senior official in Jerusalem", it said the diplomat was expelled two weeks ago and although Uruguayan officials briefed Israel on the move they made no public announcement. 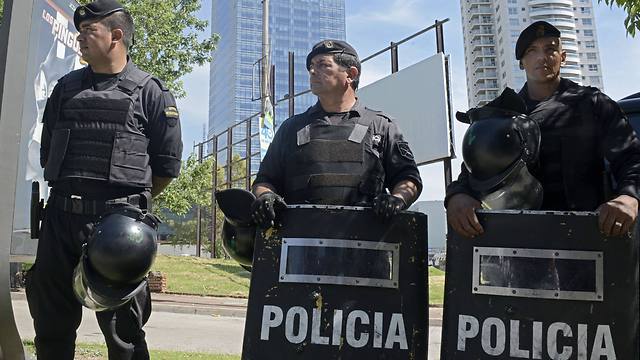 Security forces stand guard near the Israeli embassy in Montevideo after a suspicious package was found in January (Photo: AFP)
"Investigations carried out by Uruguay’s intelligence services after the discovery of the device yielded information pointing to a possible involvement of someone at the Iranian embassy," Haaretz's diplomatic correspondent wrote.

"The Uruguayan government turned to Iran’s government for information and after consultations between the two, it was decided to expel one of the senior diplomats at Iran’s embassy."

Israel's foreign ministry declined to confirm or deny the report. "I am aware of it but I have nothing to add," a spokesman told AFP.

On January 8, Montevideo bomb squad officers detonated what turned out to be a fake bomb near the Israeli embassy, located in the World Trade Centre office complex in the city.

The convincing-looking fake -- complete with fuse, detonator and other elements found in a real bomb -- was detected some 70 metres (230 feet) from the building by bomb-sniffing dogs.

After destroying the device, bomb squad Lieutenant Colonel Alfredo Larramendi told reporters that it "never posed any danger" but might have been part of a dress rehearsal for the real thing.

"It might have been put there to see the response time" of responders, or to size up the quality of the security of Israel's embassy," Larramendi said.

Israel has long accused Iran of sponsoring attacks against it around the world, using Lebanon's Shiite Hezbollah and Palestinian Islamist group Hamas as proxies.

"Iran and Hezbollah have a well-established terrorist infrastructure in South America, based on Shiite Lebanese migrants," Haaretz wrote.

Nisman was found dead in his apartment with a gunshot wound to the head last month on the eve of a congressional hearing at which he was expected to accuse President Cristina Kirchner of covering up Iranian involvement in a 1994 bombing at a Buenos Aires Jewish centre.

The bombing killed 85 people and wounded 300, the deadliest such attack in Argentina's history.