The Lebanese army received on Sunday a shipment of heavy weaponry and ammunition from the United States.

According to a report in the An-Nahar Lebanese daily, a ship carrying more than 70 American-made heavy guns docked at the port of Beirut.

The weapons are reportedly intended to help the Lebanese Armed Forces (LAF) fight Islamist organizations who are attempting to infiltrate Lebanese territory from Syria. 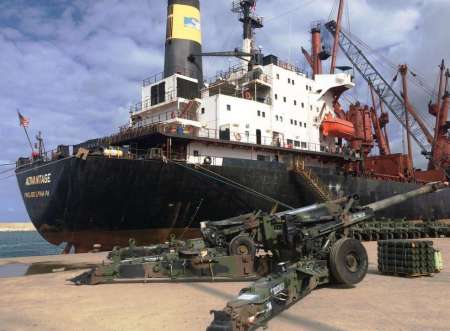 Weapons delivered to Lebanon from the United States (US Embassy Beirut Twitter)
A separate report on the IHS Jane's news site said the LAF has already received a shipment of M109 155 mm/37 caliber howitzers, which would provide it with a significant boost to its artillery capabilities. "The Lebanese military received 72 M198 power supply (howitzers), and more than 25 million rounds of artillery, mortar and rifle ammunition," the official said on condition of anonymity. The LAF "received about a dozen M109s supplied by Jordan via a third party transfer," the US embassy in Beirut told IHS Jane's. The howitzers were delivered in late January. An AFP photographer at the Beirut port also saw several Humvees, howitzers, ammunition containers and other military vehicles arriving. In a statement, the US embassy said the aid is worth $25 million, adding that the 26 million rounds of ammunition included small, medium and heavy artillery rounds.

"Support for the (Lebanese military) remains a top priority for the United States. Recent attacks against Lebanon's army only strengthen America's resolve to stand in solidarity with the people of Lebanon to confront these threats," said the embassy.

It added: "The United States is providing top of the line weapons to the (Lebanese army) to help Lebanon's brave soldiers in their confrontation with the terrorists."

The deal comes as Beirut faces a growing jihadist threat on its border with Syria. More than a million refugees have fled the war in Syria by escaping to Lebanon, according to figures from the United Nations.

"We have come together, Saudi Arabia and France, to help Lebanon on the condition that it also helps itself, for its own security," Hollande added, without commenting directly on the joint contract.

The French weapons are scheduled to arrive in Lebanon in early April, the French foreign minister's office said.

In recent months, Lebanon's army has fought several battles against jihadists streaming in from across the restive border with Syria and the army has deployed several batteries north of the Bekaa Valley to shell jihadist positions. 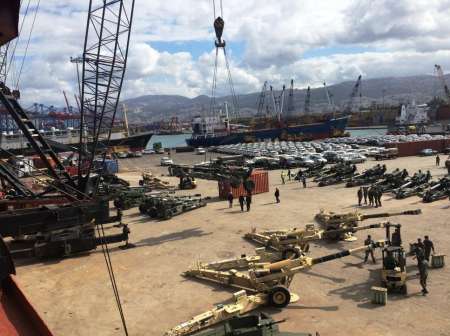 The deadliest battle took place last August in the border town of Arsal.

The jihadists withdrew after a deal brokered by Lebanese Sunni clerics, but they took with them more than two dozen army and police hostages.

Four of the hostages have since been executed, and efforts to release the remaining 25 appear completely stalled.

In 2014, Lebanon was the fifth largest recipient of US foreign military aid, the embassy said.

"In 2014 alone, the United States provided over $100 million to the (Lebanese military), adding to the $1 billion in assistance provided... since 2006," said the statement.

The civil war raging in Syria, which in nearly four years has killed more than 210,000 people, has had a major security, economic and humanitarian impact on Lebanon.

The tiny Mediterranean country was dominated militarily and politically by Syria for nearly 30 years until 2005.

It remains divided over the conflict in Syria, with Shiite Hezbollah and its allies backing President Bashar al-Assad, and the Sunni-led opposition supporting the revolt.