The Palestinian economy: Israel's control over Area C comes at a price

Analysis: The Palestinian economy needs to exploit the potential for economic development, but Israel thwarts any attempt.

"Economic peace is a corridor for diplomatic solutions," said Benjamin Netanyahu during his election campaign in 2008, and spoke in praise of economic peace between Israel and the Palestinians. In 2009, he even set up a ministerial committee – which he headed - to promote economic peace. Ministers were appointed to serve by his side: Ehud Barak, Avigdor Lieberman, Yuval Steinitz and Silvan Shalom. In a meeting with Quartet Representative Tony Blair, Netanyahu presented the first projects: an industrial zone on the border of Jenin, joint tourism projects, and the development of a Christian baptism site on the Jordan River.

But in practice, these promises are far from reality: As long as more than 60 percent of Area C is under Israeli control, and as part of that most of the areas natural resources, there is no chance of economic peace. 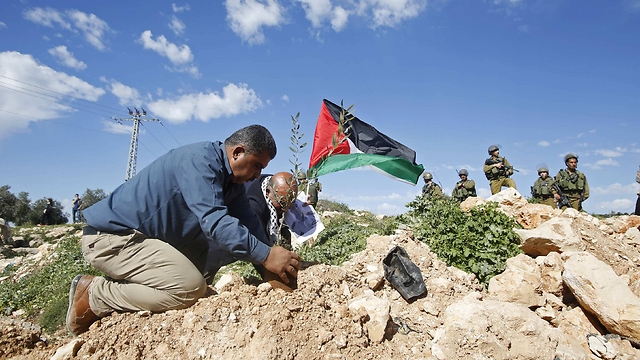 Area C comprises more than 60 percent of the West Bank, and includes the Jordan Valley and the Judean Desert, along with Jewish settlements, highways and territories under the supervision of the army. In practical terms it is annexed. Moreover, a long list of Israeli politicians - including members of the Bayit Yehudi and Likud – want to make the annexation formal. This move would mean the loss of any hope of an economy or a Palestinian state.

Much land in Area C is undeveloped. Israel, however, does not permit Palestinian construction for residential, commercial or industrial purposes. Over the years, the Palestinian government has presented many programs: residential projects on the slopes of the Jordan Valley, an international airport near Nabi Musa south of Jericho which would absorb Muslim pilgrims from the East, the construction of hotels and resorts. Plans were also drawn up for chemical industrial plants north of the Dead Sea. These programs have never been implemented.

Most of the residents of Area C, some 350,000, are Jewish settlers. There is no accurate figure for the size of the Palestinian population, but assessments carried out by the Civil Administration and various human rights groups say it ranges from 120,000-300,000.

Some 70 percent of Area C is included within the municipal boundaries of the local settlement councils. In these areas, it is impossible for Palestinians to get permits for development or construction. Buildings that are constructed are razed under demolition orders.

Areas A and B, which account for less than 40 percent of the West Bank and are under the auspices of the Palestinian planning authorities, long ago became overcrowded enclaves cut off from one another. These lands have been almost completely developed, and those that are still available are extremely expensive. Area C on the other hand has a contiguous area, making construction and development of this area absolutely vital.