US president says difference in stance on Tehran is separate from the decision not to meet with PM during his Washington visit; Netanyahu says he's determined to speak to Congress to 'prevent dangerous agreement' with Iran.

"It does not make sense to sour the negotiations a month or two before they're about to be completed and we should play that out. If, in fact, we can get a deal, then we should embrace that," the president said in a joint press conference with German Chancellor Angela Merkel.

"If we can't get a deal, then we'll have to make a set of decisions and, as I've said to Congress, I'll be the first one to work with them to apply even stronger measures against Iran," he said.

"But what's the rush? Unless your view is that it's not possible to get a deal with Iran and it shouldn't even be tested. And that, I cannot agree with, because as the president of the United States, I'm looking at what the options are if we don't get a diplomatic resolution. And those options are narrow, and they're not attractive," the president added.

However, despite the "real differences" between the American administration's position and that of Israel on Iran, "that's separate and apart from Mr. Netanyahu coming to Washington," Obama said.

When asked about the decision not to meet with Netanyahu when the Israeli prime minister visits Washington next month to address Congress on the Iranian threat, Obama reiterated that the decision was made due to the proximity to the elections in Israel.

Her added that "as much as I love Angela, if she was two weeks away from an election, she probably would not have received an invitation to the White House, and I suspect she wouldn't have asked for one."

He went on to say that the decision also "has to do with how we do business, and I think it's important for us to maintain these protocols because the US-Israeli relationship is not about a particular party." 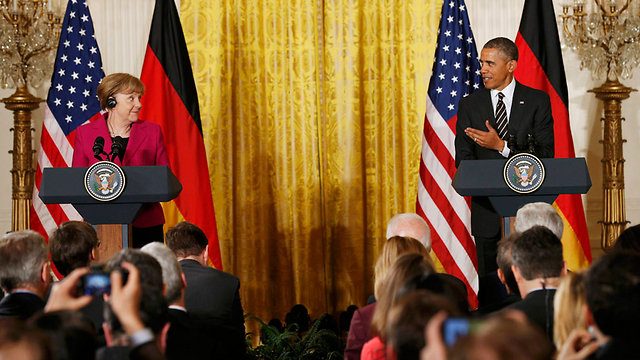 Merkel and Obama at the conference (Photo: Reuters)

Netanyahu is due to address a joint session of Congress about Iran's nuclear program on March 3, just two weeks before Israeli elections, following an invitation from John Boehner, the Republican speaker of the House.

Boehner's invitation has caused consternation in both Israel and the United States, largely because it is seen as Netanyahu, a hawk on Iran, working with the Republicans to thumb their noses at Obama's policy on Iran.

As a result, Israeli officials told Reuters they are considering whether Netanyahu should speak to a closed-door session of Congress, rather than in a prime-time TV address, so as to drain some of the intensity from the event, a source said.

Another option is for the prime minister to make his speech at the annual meeting of the American Israel Public Affairs Committee in Washington the same week, rather than in Congress.

Officials in Netanyahu's office said that for now his schedule had not changed. "In the past days the prime minister has been approached several times about his trip to the United States," one official said. "At the moment there is no change in the plans."

The American president warned the prime minister not to let the relationship between the United States and Israel be "clouded with what could be perceived as partisan politics." "This isn't a relationship founded on affinity between the Labor Party and the Democratic Party or the Likud and the Republican Party. This is the US-Israeli relationship that extends beyond parties and has to do with that unbreakable bond that we feel and - and our commitment to Israel's security and the shared values that we have," Obama said. Netanyahu, meanwhile, was not concerned about what his visit may do to US-Israel ties. "From the state's establishment to this day, there have been significant disagreements between Israel and the US and relations remained strong. This will be the case this time as well," he said during a launch event for the Likud's Russian-language elections campaign. 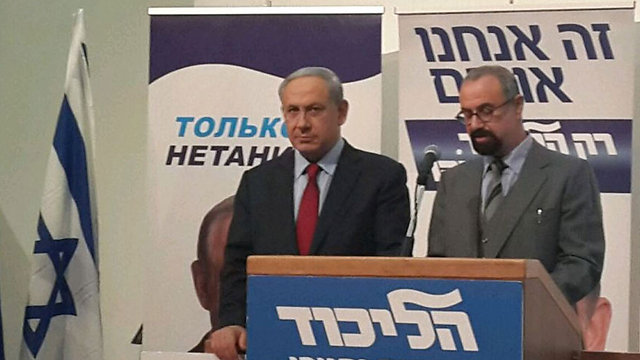 Netanyahu at the Russian-campaign launch event (Photo: Gilad Morag)
On nuclear negotiations with Iran, the US president said issues and gaps in negotiations have been "sufficiently narrowed and sufficiently clarified" and that the so-called P5+1 group has now offered Iran a deal that "allows them to have peaceful nuclear power but gives us the absolute assurance that is verifiable that they are not pursuing a nuclear weapon." The issues, he said, were no longer technical but rather political. "The issue now is whether Iran has the political will and desire to get a deal done," Obama said.

The US president also said he does not believe an extension would be "useful" unless Iran can agree to the basic outlines of a deal. 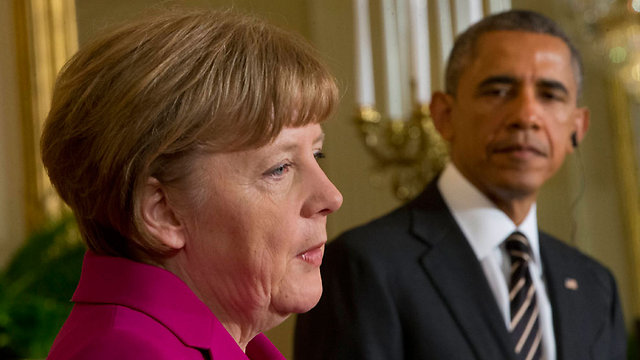 "If Iran has no aspiration to get nuclear weapon, there should be a possibility to get a deal," Obama said. "They have to make a decision."

Netanyahu, meanwhile, said he was determined to go to Washington and address Congress.

"While there are those who are focusing on protocol or politics, "A bad deal with Iran is forming in Munich that will endanger Israel's existence. According to reports, the agreement will allow them to produce dozens of nuclear bombs. As prime minister, it is my duty to do everything to prevent this dangerous agreement and that's why I'm determined to go to Washington and present Israel's position before the members of Congress and the American people," he said.

Meanwhile, Sen Bernie Sanders, an independent, is the first senator to announce he won't attend Netanyahu's speech. Democratic Reps. John Lewis and Jim Clyburn are among a handful in their party who have pledged to boycott Netanyahu's speech.

"The president of the United States heads up our foreign policy and the idea that the president wasn't even consulted - that is wrong," Sanders said. "I am not going. I may watch it on TV, but I'm not going."