Book by former top adviser reveals US president was frustrated because he 'felt he had pulled his punches with Netanyahu to avoid antagonizing' American Jewish community.

One of US President Barack Obama's main goals for his second term in office was to push Prime Minister Benjamin Netanyahu towards a peace agreement with the Palestinians, a new book by one of Obama's top advisers reveals.

"From almost his first day in office, (President Obama) had pushed the Israelis and Palestinians for a two-state solution, but his efforts, like those of presidents before him, had been run aground by the intractable politics of the Middle East," David Axelrod wrote in his new book "Believer: My Forty Years in Politics," sections of which were reported by CNN.

"He was frustrated with both sides, but felt he had pulled his punches with Netanyahu to avoid antagonizing elements of the American Jewish community," Axelrod wrote. 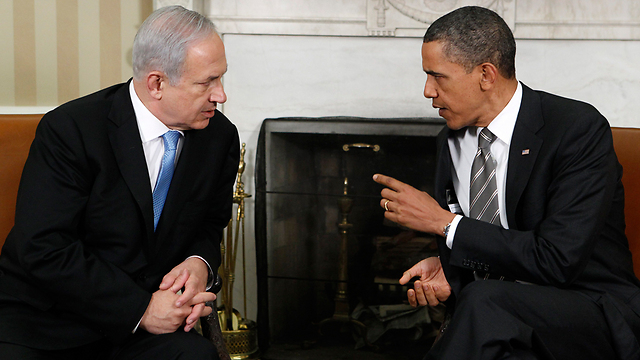 When the president composed his "Bulworth" list of "issues on which he felt he had been insufficiently forthright," he singled out the Israeli-Palestinian conflict and, more specifically, said he wanted to be tougher on Netanyahu, Axelrod revealed.

Despite his opponents claiming to the contrary, Axelrod wrote that President Obama is a strong supporter of Israel. Axelrod, a Jew himself, recounts Obama's trip to the Holy Land as a presidential candidate in 2008. The visit, Axelrod noted, "would help quell the concerns of some American Jews, who feared that a black man with an Islamic-sounding name and a Farrakhan-hugging minister would not feel a sufficient bond with Israel." Obama's opponents, however, persisted in doubting his commitment to Israel well into his presidency. "The questions persisted. 'I know what he says about Israel,' I was asked more than once by anxious Jews back home, 'but does he feel it in his kishkes?' Though the questions would persist into his presidency, on this trip, Barack more than passed the kishkes test," Axelrod wrote.
David Axelrod was Obama's adviser during his first term in office, alongside another Jew - Rahm Emanuel. Both have left before the end of the president's first term, but Axelrod was involved in Obama's reelection campaign.

Back in February 2014, the New York Times reported that Obama planned to push Netanyahu to agree to the proposed framework agreement then being drafted by US Secretary of State John Kerry, But talks stalled, which Kerry attributed to unilateral steps by Israel.

Recently, tensions between Obama and Netanyahu have reached new heights over the prime minister's plan to speak to Congress two weeks before elections and differences of opinion regarding negotiations with Iran. Obama publicly warned Netanyahu on Monday against damaging the negotiations.