"As the saying goes: Know the language of your enemy," says Dalal Said, a Palestinian television reporter who is learning Hebrew in a bid to better cover the conflict.

She is one of about 30 journalists taking two hours of Hebrew classes a week at a college in the West Bank city of Ramallah with an emphasis on learning to read Israeli newspapers.

"We live under occupation so it is crucial that we know what the press says to be able to get the bigger picture," says fellow student Imad Freikh, who works for a weekly magazine. 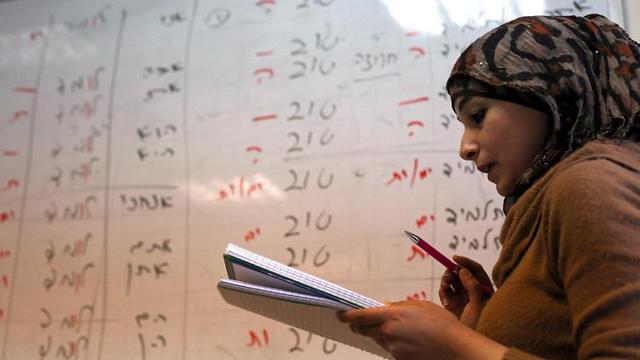 A Palestinian student looks at a notepad during a Hebrew language course at the Nasser al-Shiukhi college in Ramallah (Photo: AFP)
For Arabic speakers, learning Hebrew can be surprisingly easy because both are Semitic languages and often have similar three-letter roots for a word. Although Arabic script is cursive and Hebrew is written in block letters, both are constructed predominantly of consonants with some or all of the vowels omitted. During the six-week course at Nasser al-Shiukhi college, the teacher – a Palestinian from Jerusalem who has a degree in Hebrew –  tries to add some context to his lessons. While teaching the colours, he tells his students that the word for black is "shakhor", making sure to add that some Israelis refer to black people as "cushim" - a derogatory term which he says demonstrates a tendency toward racism.

For Ali Obeidat, a journalist who helped organise the course, knowing Hebrew is crucial to access information not always readily available in Arabic. "In some cases, there is no Palestinian source for certain information so the Israeli press is the main source for covering the conflict," he told AFP. This is often the case when it comes to the number of people injured in a clash with the army or Jewish settlers where Israeli medics are often first on the scene and the only ones with accurate information. Very few Palestinian journalists have official accreditation to cover events in Israel, giving them little access to direct quotes from Israeli officials, so they often pick up such remarks from the Israeli or international press.

Knowing Hebrew is also crucial to be able to communicate with Israeli soldiers, whose presence is ubiquitous across more than 60 percent of the occupied West Bank.

Speaking the language is particularly important for Palestinian journalists working in the field, especially when they are in a dangerous situation, says Nasser al-Shiuki, head of the college which runs the course and has already trained around 200 journalists. 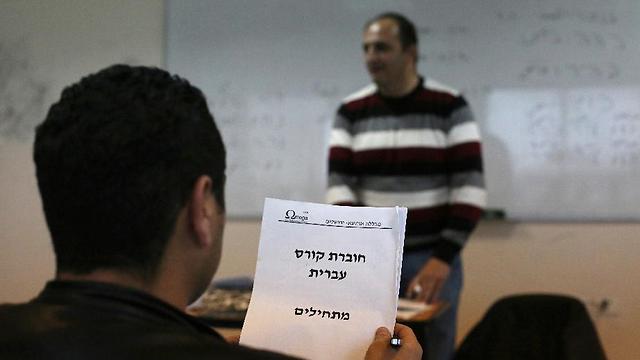 "It is vital for Palestinian journalists, above all for photographers and cameramen who cover clashes all the time and are in direct contact with the Israeli army," he says.

"If you understand the language of your enemy, you know how to interact with him."

Many Palestinians already speak some Hebrew because until the start of the second uprising, or intifada (2000-2005), roughly 150,000 of them had jobs working inside Israel.

When the violence erupted, Israel cancelled their work permits.

Countless thousands of others have also learned some Hebrew through years spent inside Israeli prisons where it was the only language with which they could communicate with their jailers.

In annexed east Jerusalem, which is home to 310,000 Palestinians, most speak Hebrew by necessity although their grasp of the language is far from that of Israel's Arab citizens, who make up around a fifth of the population.

Living, working and studying in the Jewish state, they have a far greater level of fluency in Hebrew, giving them greater access to an array of jobs, including the legal profession where they often represent their Palestinian brethren in both civilian and military courts.

Most Israelis meanwhile learn some Arabic at school because it is one of the country's official languages.

For Said, knowing Hebrew should be compulsory for all Palestinians.

"They should teach it in schools because for the Palestinians, speaking Hebrew is more important than speaking English," she said.