Arab judge presides over committee charged with deciding whether to ban two potential MKs - one a Jewish extremist with links to Kach, the other an Arab MK with a long list of anti-Israel activities; High Court likely to reverse bans.

Headed by Israel's only Arab Supreme Court judge, Israel's Central Election Committee banned Thursday MK Hanin Zoabi and Baruch Marzel from participating in the March 15 elections. The committee also banned the firebrand Arab MK in 2003, but a Supreme Court ruling reversed the call, as will likely happen this time as well.

The committe convened Thursday to discuss banning the two politicians – one a far-right Jewish activist, the other the famous Arab MK - from participating in the March 17 elections; 27 members voted in favor of banning her. 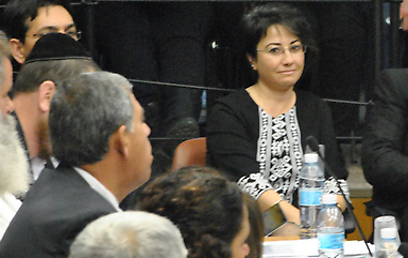 The center-left Zionist Camp joined almost all of Israel's political parties in announcing it supported the petitions calling to ban firebrand Arab MK Hanin Zoabi and Jewish extremist Baruch Marzel. Historically such bans pass the committee but are later shot down by the High Court.

Zoabi, who is currently an MK from Balad and is contending as part of the Joint Arab List, is known for her highly polemic stance on Israel, which some say borders on incitement to terror, and her participation in anti-Israel activities. She was sanctioned this year for her role in a protest in which she allegedly called for violent action against police officers.

Marzel, who served in the past as an MK and is now vying for a spot through the Yachad - HaAm Itanu party, is being debated for his historic role in the Kach party, the only party ever barred from participating in elections because of its racist position against Arabs.

Politicians from almost the entire political spectrum sounded support for the call to ban Zoabi. The center-left Zionist Camp explained its decision, saying both Zoabi and Marzel had "pushed the limits of democracy to the extreme and abused freedom of speech." Other politicians heckled Zoabi during the hearing, shouting "you have the blood of our soldiers on your hands" the moment she begun to speak. Her statement to the committee was repeatedly interrupted. Zoabi defended her positions and candidacy, slamming the discussion as racist and undemocratic: "I cannot understand why I am here. I fight the murder of civilians wherever they take place, I fight racist laws. "Why are those calling for death and destruction, land appropriation, and the death of the people of Gaza not standing here? "Those attempting to get me banned, they are the ones who should be here. These racists need to be stopped, we should not be holding ceremonies for revenge and incitement like the ones the Arab MKs are forced to undergo on a daily basis," she said. "You are not judging me, but the entire idea of Arab representation," Zoabi added, praising the united Arab party for standing by her side. Head of the the Yachad - HaAm Itanu party, Eli Yishai, slammed Zoabi and urged the committee to allow his fellow party member Marzel to run in the elections, tying the two together. "Now the people of Israel can be happy that I brought Marzel to the Knesset, so he can fight Zoabi every day," Yishai said. Head of the committee, Salim Joubran, a Christian and the sole Arab judge on Israel's Supreme Court, warned against politicizing the committee and courts. "A tradition seems to be evolving in which the committee is expected to ban people from the election on the assumption the court will reverse the decision. "Even if you think a candidate's opinions are unacceptable, then you cannot try to prevent them from running. The Supreme Court ruled that the committee can bar a candidate only as a last resort and only for those who radically bent the rules and calls for Israel's destruction," Joubran said. Journalist turned rightwing politician Sharon Gal slammed Zoabi and urged the committee to bar her from running: "It is clear Zoabi crossed the red line. There is a critical mass of statements and actions; unlike others who made outlandish statements, Zoabi acted on them."