Arab politicians credit hard-line FM Lieberman for forcing the three Arab parties to run together on one list for first time in Israel's history, after he pushed to raise elections threshold.

Aida Touma-Sliman, number five on the new joint Arab list, and assured of winning a seat in the next Israeli parliament, credits hard-line Israeli Foreign Minister Avigdor Lieberman for forcing the three Arab parties to run together on one list for the first time in Israel’s history. Lieberman was behind the government’s decision to raise the “threshold”, meaning the minimum percentage of votes needed to win a Knesset seat, from two to 3.25 percent. The Arab parties saw this as an effort to decrease Arab representation in the Israeli parliament, or Knesset, as none of the three parties, who currently have 11 seats together, would cross the threshold. That fear caused them to put aside their differences and form one joint party, a move which was welcomed by the Arab public in Israel.

“This list is the most effective answer to the racist intentions of Lieberman who wanted to keep the Arabs out of the Knesset,” Touman-Sliman told The Media Line. “Our answer was to band together and to become even stronger than we were before.” 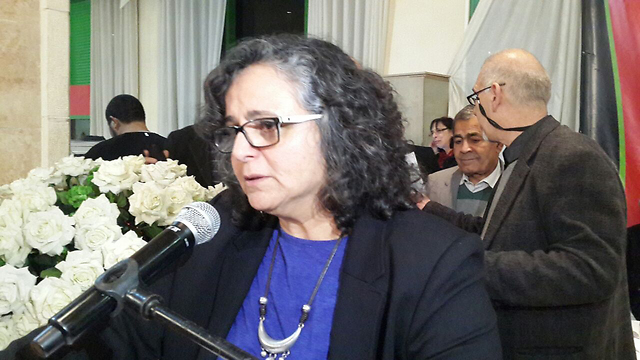 Aida Touma-Sliman
Touman-Sliman is from the northern Israeli city of Acre and was formerly the director of  the Women Against Violence organization. Her Hadash, or Communist party, is an Arab-Jewish party, but is considered one of the Arab parties that represent the 20 percent of Israeli citizens who are Arab. Israeli Arab analysts say that the new united Arab list will convince many Arab citizens of Israel who have not voted in the past to visit the ballot box. They hope that the party will get 15 seats in the 120-seat Knesset and could become the third or fourth largest party. “If that happens the government will not be able to ignore our issues including ending the occupation (of the West Bank and east Jerusalem) and pushing for equal rights for Arab citizens of Israel,” she said. Lawyer Hassan Jabarin, the founder of Adalah, an organization that advocates for Israel’s Arab minority, says he helped push the three parties together by bringing their representatives together several times in his home, adding - “my wife gave them all good things to eat.” He says the new joint list, which includes Hadash, Ra’am (Islamist), and Balad (an Arab secular party) is historic. “This is the first time in the history of the Arab nation that you have a list which includes nationalists, secularists, Islamists, Jews and Arabs,” he told a news conference in Jerusalem. “You don’t have a list like that anywhere in the Middle East. People kill each other for these kinds of differences in Syria, in Egypt and in other places, and here we run together.” He says that in the last election in 2013, just 57 percent of the Arab public voted. In surveys, at least one-quarter of those who didn’t vote, said they would if the Arab parties united. He hopes for participation of 70 percent.

Israel’s fractious system of parliamentary democracy means that the only way to govern is by forming a coalition.

Traditionally, that means that the President asks the party with the largest number of seats to put together a coalition.

They don’t always succeed. In 2009, Tzipi Livni, today running on a joint ticket with Labor leader Yitzhak Herzog, led her Kadima party to what looked like victory with 29 seats. Yet, she was unable to put together a governing coalition. Likud leader Binyamin Netanyahu succeeded, and he became the country’s Prime Minister - a position he hopes to keep in the next election.

Yet even if the joint Arab list wins 15 seats as expected, analysts say they will not join the governing coalition, even if the Zionist camp, led by Herzog and Livni, could form a coalition. However, they say they would support the coalition from outside.

“I don’t see them joining any government that could make a decision on going to war with Gaza and Lebanon or that could demolish Palestinian houses,” Mtanese Shihadeh, an analyst with Mada al-Carmel told The Media Line. “All of the Jewish parties want Israel as a Jewish state, while we want Israel as a state for all of its citizens.”