A volunteer Jewish guard was shot dead and two police were wounded when shots were fired at a synagogue in central Copenhagen where a Bat Mitzvah was underway a little after midnight Saturday, Danish police said, adding that it was too early to say whether the incident was connected to an earlier one at an arts cafe, which left one civilian dead and three policemen wounded.

Israel's Foreign Ministry named the Jewish victim as Dan Uzan, 37, whose father is Israeli and mother is Danish.

Copenhagen police shot dead a man who had opened fire on officers early Sunday morning. They say the man was likely the perpetrator of the attacks.

"We assume that it's the same culprit behind both incidents, and we also assume that the culprit that was shot by the police task force on Norreport station is the person behind both of these assassinations," Chief police inspector Torben Molgaard Jensen told reporters.

Earlier, police said they were looking for two perpetrators. However, Investigator Joergen Skov later said the preliminary investigation revealed nothing suggesting that there were other gunmen involved.

One policeman was shot in the arm and the other in the leg during the attack on the synagogue, local media reported. The volunteer Jewish guard was shot in the head and later succumbed to his wounds.
"The police were already there. Someone came and started shooting," police spokesman Allan Wadsworth-Hansen said, adding that police officers' lives were not in danger.

A massive manhunt was underway overnight, Danish media reported, after the gunman fled the scene on foot. According to reports, police were searching the city's botanical garden, in the heart of Copenhagen.

Early Sunday morning, a person "who could be related to the investigation" arrived at a house under police surveillance in the popular district of Nørrebro, an area in Copenhagen not far from the sites of the two attacks. When the officers shouted at the man, "he opened fire." No policemen were hurt in the fire exchange.

Police did not confirm any link between the man they shot and the earlier attacks or give further details.

The attack at the synagogue followed a shooting earlier Saturday on a cafe which hosted a debate on freedom of speech and was attended by Swedish artist Lars Vilks, who has been threatened with death for his cartoons of the Prophet Mohammed. A 55-year-old man died in that attack, and police said a suspect was still at large. 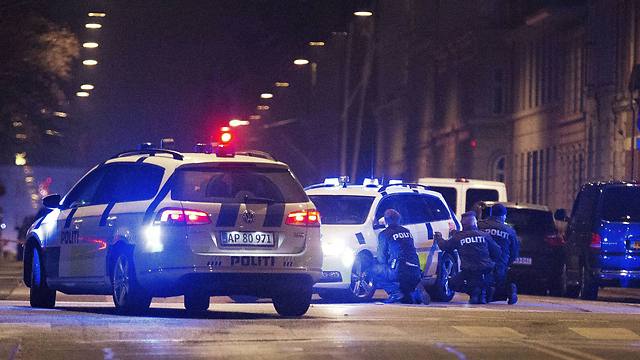 Police at the scene of the shooting (Photo: Reuters)

Danish police released a photo of the suspect in the cultural centre attack, describing him as 25-30 years old and around 185 centimeters (six feet) tall, with an athletic build.

Prime Minister Helle Thorning-Schmidt said Denmark was on high alert after the attack that police said was aimed at Vilks, who stirred controversy in 2007 with published drawings depicting the Prophet Mohammed as a dog.

The cafe complex was hosting a cultural event called "Art, Blasphemy and Freedom of Expression". French ambassador to Denmark Francois Zimeray, who was attending the event, likened the shooting to the attack on the Charlie Hebdo newspaper in Paris by Islamist militants that killed 12 people last month. That attack was followed by a shooting at a Jewish site in the city, in which four people were killed. 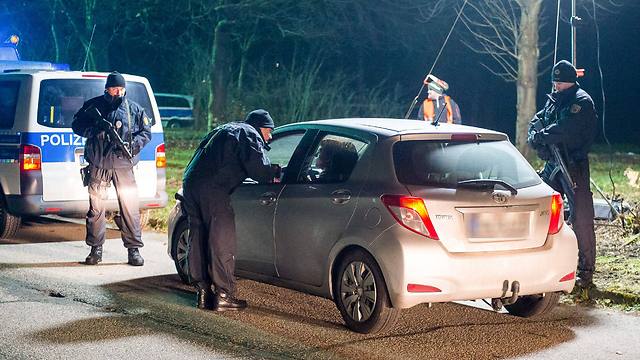 Roadblock near German border in Denmark after the attacks (Photo: EPA)

"We feel certain now that it was a politically motivated attack, and thereby it was a terrorist attack," Thorning-Schmidt told journalists close to the site of the attack Saturday.

European Council President Donald Tusk called the attack "another brutal terrorist attack targeted at our fundamental values and freedoms, including the freedom of expression."

Helle Merete Brix, organiser of the event at the cafe, told Reuters she had seen an attacker wearing a mask.

"The security guards shouted 'Everyone get out!' and we were being pushed out of the room," Brix said.

"They tried to shoot their way into the conference room ... I saw one of them running by, wearing a mask. There was no way to tell his face."

Denmark itself became a target after the publication 10 years ago of cartoons lampooning the Prophet Mohammed, images which led to sometimes fatal protests in the Muslim world.

Many Muslims consider any representation of the Prophet Mohammed blasphemous.

Foreign Minister Avigdor Lieberman said in response to the shootings that "the series of terror events in Copenhagen, in the synagogue and the free speech event, proves what we have said over the years – that Israel and the Jews are hit by this terrorism first of all because they are the frontline in the war that terror is waging against the West and the entire free world."

Lieberman added that "the international community needs to ask for more than declarations and demonstrations against this terrorism, but to shake off the rules of political correctness and fight a real all-out war against Islamic terror and its roots."

Minister Lieberman said the foreign ministry is in close contact with the Israeli embassy in Denmark and was following events as they unfolded.

Ynet, Reuters, Associated Press, and AFP contributed to this report.