Harassment by Houthi movement - whose motto is 'Death to America, death to Israel' - prompts Yemen's remaining Jews to mull movement to Israel: 'We don't want to leave. If we wanted to, we would have done so a long time ago.'

A few worried families are all that remain of Yemen's ancient Jewish community, and they too may soon flee after a Shi'ite Muslim militia seized power in the strife-torn country this month. Harassment by the Houthi movement - whose motto is "Death to America, death to Israel, curse the Jews, victory to Islam" - caused Jews in recent years to largely quit the northern highlands they shared with Yemen's Shi'ites for millennia.
Support
Yemen minister gives award to persecuted Jews
Associated Press
Culture minister honored for fighting discrimination against women dedicates prize to small population of Yemenite Jews, who are subjected to threats by radical Islamists.
Yemen minister gives award to persecuted Jews

But political feuds in which the Jews played no part escalated last September into an armed Houthi plunge into the capital Sanaa, the community's main refuge from which some now contemplate a final exodus.

Around six Yemeni Jews from the same family arrived in Israel on Friday, members of the community told Reuters. 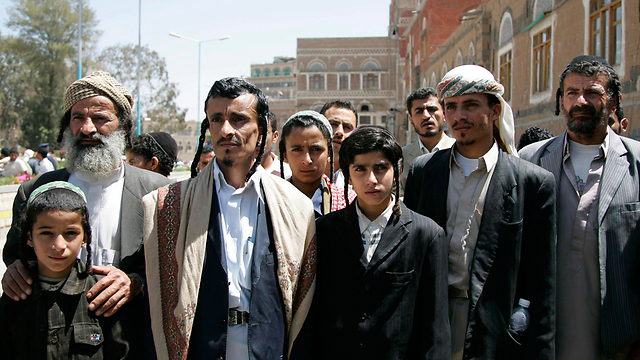 "Since last September, our movements have become very limited for fear of the security situation, and there are some members of the community who preferred to leave Yemen," sighed chief rabbi Yahya Youssef, sitting in his apartment within a walled compound next to ministry of defense.

Dressed in the traditional Yemeni flowing robe, blazer and headwrap, Rabbi Yahya's lined face is framed by two long curls on each side. Along with Hebrew he and his co-religionists speak Arabic, value local customs and are wary of life beyond home.

"We don't want to leave. If we wanted to, we would have done so a long time ago," Yahya said as his infirmed old father rested in the sun outside their home. 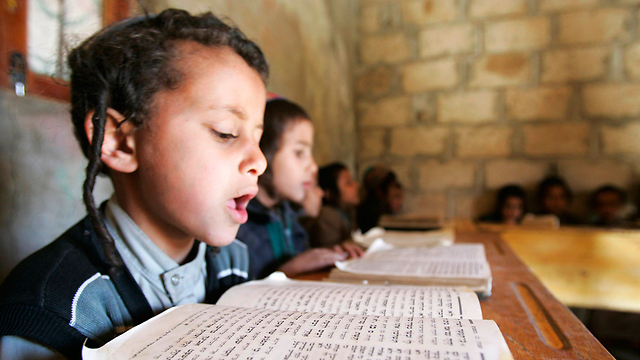 Photo: Reuters
Jews evacuated from the Houthi stronghold of Saada province in 2009 to the government-guarded compound have dwindled from 76 to 45. A group of 26 others live in a city north of the capital. Their total number is down from around 200-300 just a few years ago and now makes up a tiny fraction of Yemen's 19 million-strong population. Yemen's Jewish community numbered over 40,000 until 1949, when Israel organised their mass transfer to the newly-established state. Those who stayed say they had lived in peace with their neighbours in the Muslim Arab country.

'Our problem is with Israel'

Boredom and isolation reign at the Jews' lodgings in their unlikely ghetto in a luxury enclave called "Tourist City" near the now-evacuated United States embassy.

Cut off from the carpentry and metalworking shops that were their renowned trade for centuries, residents now subsist on small government allowances that they say barely meet their living costs. 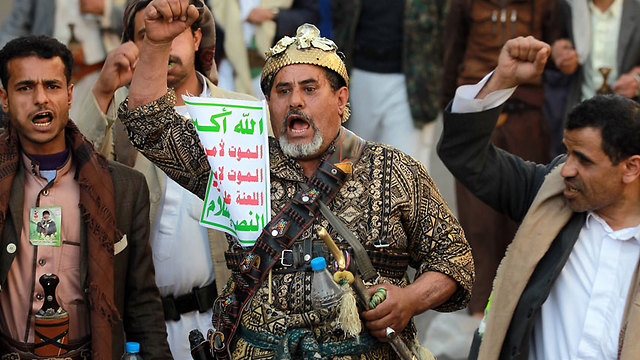 Young men who venture into the souk often tuck their distinctive curls up into their headwraps for fear of bullying. Boys are no longer eager to grow them in the first place.

The local Houthi official now responsible for the surrounding neighborhood visited Rabbi Yahya on Thursday to offer reassurances, according to a Reuters correspondent who was present. "Jews are safe and no harm will come to them," said Abu al-Fadl, who like other leaders in the movement goes by a nom de guerre and not his given name. "The problem of the Houthis is not with the Jews of Yemen but with Israel, which occupies Palestine," he added. 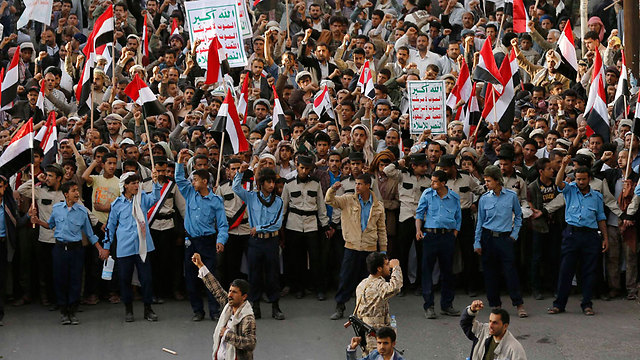 Photo: Reuters
But memories of death threats and Houthi fighters burning down Jewish homes during the militia's decade of on-off war with the now nonexistent Sanaa government will not be soon forgotten. Israel-linked organisations have in the past repeatedly helped whisk Jews out of Yemen, but Israeli government spokespeople declined comment on the matter, citing reluctance to endanger Yemen's Jews by association with Israel. "There are certainly discussions going on over options available regarding the Yemenite Jews," said an Israeli official briefed on immigration matters. But these are individuals who will have to make their own individual decisions about what to do," the official added. Safety may not be the only concern for the deeply conservative community though, who fear life in Israel or elsewhere will be an affront to their traditional values. "In Israel, the girls rebel against their fathers, and we fear for our daughters. I could not accept that my daughter might come to me one day and tell me that she was married to her boyfriend," Rabbi Yahya said. "This is not permissible in our religion."