President Cristina Fernandez de Kirchner says US and Israel intervening in Argentina's business ahead of protest organized by investigating attorneys demanding answers in the mysterious death of prosecutor Alberto Nisman.

Argentine President Cristina Fernandez suggested on Wednesday that the United States and Israel were meddling in the South American country's business, the latest barb amid intensifying rhetoric ahead of the protest demanding answers in the mysterious death of prosecutor Alberto Nisman.

Thousands of Argentines marched in Buenos Aires to demand answers in the mysterious death of prosecutor Alberto Nisman a month ago.

Eighty-one-year-old Blanca Perez said the government needs to account for Nisman's death. In her words, "If we don't have justice, we won't have liberty." 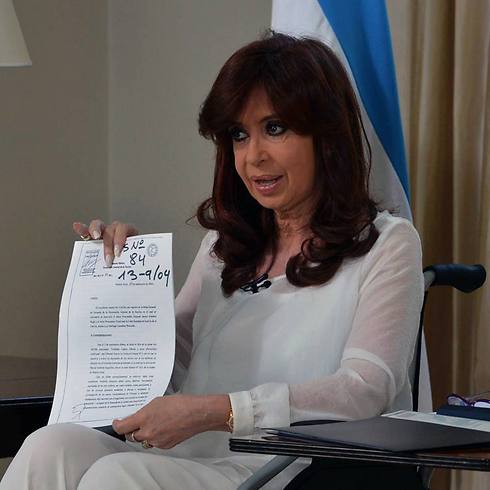 Nisman was found dead of a gunshot wound Jan. 18, hours before he was to detail to Congress his explosive accusations that President Cristina Fernandez and top administration officials orchestrated a secret deal with Iran to shield officials allegedly responsible for the 1994 bombing of a Jewish community center in Buenos Aires.

Fernandez has denied the allegations.

Fernandez, who made the comments while visiting a nuclear power plant, didn't mention the march planned for Wednesday evening or Nisman, who was found dead Jan. 18, just hours before he was to elaborate to Congress on accusations that Fernandez and Foreign Minister Hector Timerman had orchestrated a secret deal with Iran to cover up the 1994 bombing of a Jewish community center.

Fernandez referred to letters that Timerman said he sent Tuesday to his counterparts in the United States and Israel. Timerman said the two countries should not get involved in Argentina's affairs, but did not provide specifics. "Some people wanted to play dumb and look the other way," Fernandez said of the accusations. "I urge all compatriots to read every paragraph of those letters." Fernandez, known for populist, fiery speeches, did not elaborate. But she did cast the apparent friction as a battle of economic interests and attempts by other countries to keep Argentina down. "In reality, they prefer an Argentina without a nuclear plan, an Argentina that does not develop scientifically, an Argentina with low salaries and cheap labor," she said. A US embassy spokesman declined to comment, instead referring to a State Department statement from Tuesday saying the United States had offered assistance in the Nisman investigation. A spokeswoman at the Israeli embassy also declined to comment. The accusations of meddling, similar to others made by administration officials in recent weeks, come at a time of increasing tension as Fernandez's government has struggled to confront a growing institutional crisis since Nisman was found with a bullet in his right temple. The day after he was found in a pool of blood, Nisman, 51, had planned to elaborate to Congress his allegations of the secret deal, which he said Fernandez orchestrated in exchange for favorable deals on oil and grain from Iran. Fernandez and Timerman have repeatedly denied the allegations. The march, commemorating a month since Nisman was found dead, has turned into a political dispute since all the opposition parties have said they plan to participate.