The comments highlight how the Syrian conflict has redrawn traditional political faultiness and alliances in the Arab world, in this case pitting Lebanon's Hezbollah – a radical Shiite terror group – against the rich Sunni state which funds rebels in Syria as well as Hamas in Gaza, while maintating good ties with the US.

Hezbollah chief Nasrallah
“To us, Hezbollah – and I have said this on more than one occasion – was a resistance party until the compass veered to Syria,” Attiyah said, giving voice to a popular claim in the Arab world that Hezbollah lost its legitimacy when it shifted from fighting against Israel to supporting the embattled regime.

Refrencing the 2006 Second Lebanon War between Israel and Hezbollah, the foreign minister claimed that Hezbollah had abused Syria, which was willing to aid it and Lebanese during the conflict.

“Syria in 2006 embraced Hezbollah refugees. It welcomed them, protected them and was generous with them,” he was quoted as saying. “We were surprised during the Syrian revolution Hezbollah returned the greetings by killing (Syrians) and displacing them from their homes…This is our disagreement with Hezbollah,” he said. 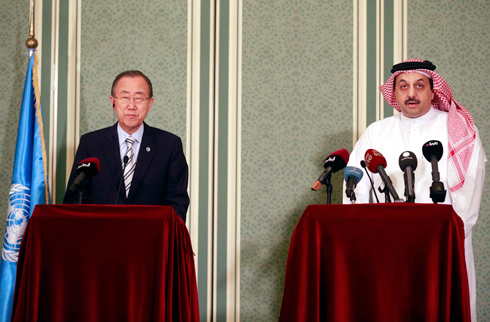 Qatar Foreign Minister Khaled al-Attiyah with UN cheif Ban (Photo: EPA)
Qatar is a strong regional force, and has recently also locked horns with Egypt after taking issue with its insistence to conduct airstrikes in Libya against the Islamic State terror group, partially in response to the execution of 21 Coptic Egyptians. Gulf Arab states threw their support behind Qatar Thursday in a row with Egypt, which accused Doha of backing "terrorism" during heated discussions about Cairo's airstrikes on jihadis in Libya. Gulf Cooperation Council (GCC) secretary general Abdullatif al-Zayani said in a statement he "rejects accusations by Egypt's permanent envoy at the Arab League that Qatar supports terrorism." Zayani said the accusations are "unfounded, contradict reality, and ignore the sincere efforts by Qatar as well as the Gulf Cooperation Council and Arab states in combating terrorism and extremism at all levels." The Egyptian accusation came in response to reservations voiced by Qatar about a clause in an Arab League statement supporting "Egypt's right to legitimately defend itself and measures taken to confront terrorism and air strikes carried out against Daesh in Libya," Cairo's official MENA news agency said.

Daesh is an Arabic acronym for ISIS.

The reservations "reveal Qatar's position in supporting terrorism," MENA quoted Egypt's envoy at the Arab League, Tariq Adel, as saying. Qatar has recalled its ambassador to Egypt over the spat. Egyptian F-16s bombed militant bases in the eastern Libyan city of Derna Tuesday, after ISIS released a gruesome video showing the beheadings of a group of Egyptian Coptic Christians who had gone to the North African country seeking work. Egypt's statements "do not help in strengthening Arab solidarity at a time when our countries are facing major challenges threatening their security, stability, and sovereignty," said Zayani. Ties between Doha and Cairo have been strained by a spat over Qatar's support for former Egyptian president Mohammad Morsi, who was ousted by the army in July 2013. GCC members Saudi Arabia, UAE and Kuwait are the main financial backers of the government of Egyptian President Abdel Fattah al-Sisi, the former army chief, having pledged around $12 billion since he came to power.

The dispute between Cairo and Doha triggered a crisis pitting Qatar against Gulf neighbors Bahrain, Saudi Arabia and the UAE last year. There was an apparent thaw in relations in December after Qatar gave its support to Sisi, who was elected to office after overthrowing Morsi.