"It will take a while for the idea of eating ostrich to gain traction in the local market."
Photo: AFP

Growing number of ventures in Palestinian agriculture seek to fill gaps in market, both for business purposes and to cut reliance on the Jewish state for food.

A small farm in the southern West Bank might seem unremarkable at first, but this specific farm is unique. Instead of the sheep traditional to the area, its livestock are ostriches.

Fifty-year-old farmer Abdelrahman Abu Tir, whose name coincidentally translates as "father of the bird", has for the last three years been farming ostriches for meat as part of a unique project in the Palestinian Territories.

In another corner of the West Bank in Jericho, a separate group of agricultural entrepreneurs have begun the first Palestinian mushroom farm since 1967. 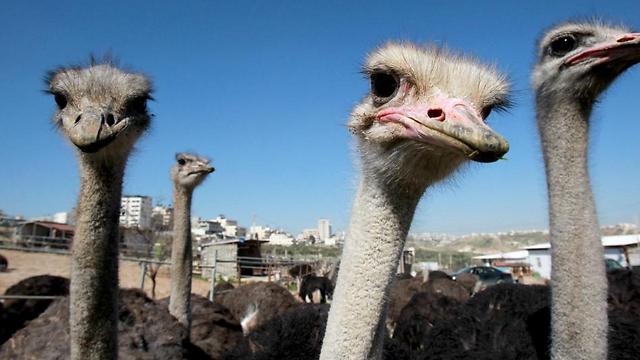 Ostriches have been farmed for meat for the last three years near the West Bank city of Bethlehem (Photo: AFP)

The two projects are among a growing number of ventures in Palestinian agriculture that seek to fill gaps in the market, both for business purposes and to cut reliance on the Jewish state for food.

Picking at tufts of coarse grass, Abu Tir's giant birds – normally spotted on the plains of Africa – look out of place in the village of Dar Salah, where he keeps 200 of them on around two hectares (five acres) of land.

He said the idea for the farm came to him when Israel banned ostrich farming several years ago because it considers the animals a "protected wild species".

"I began buying the ostriches from Israeli farms when I saw that those farms were being closed" Abu Tir said.

Since then he has been selling meat, feathers and eggs to Palestinian and Israeli buyers, but also to customers in the Gulf and neighboring Jordan. 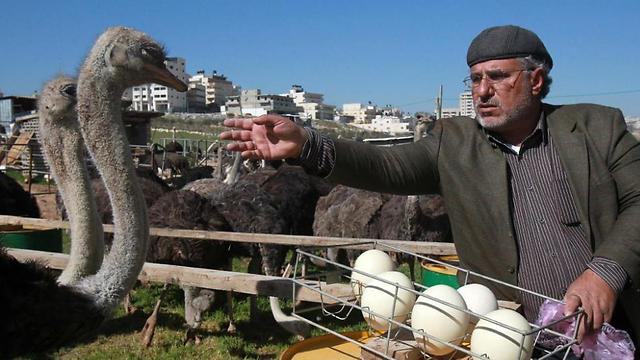 Given ostrich meat is not a common delicacy among Israelis or Palestinians, for now Abu Tir sells only on demand, but he is optimistic the business can grow.

"It will take a while for the idea of eating ostrich to gain traction in the local market. For Palestinians it's a strange meat and it's also fairly expensive," he said.

"Even turkey took a while to catch on. Palestinians prefer to eat fattier meat such as lamb."

Abu Tir has an arsenal of arguments to promote his product.

"Ostrich meat is better for your health, and the way they are farmed is much less damaging to the environment than with sheep or cattle," he said. 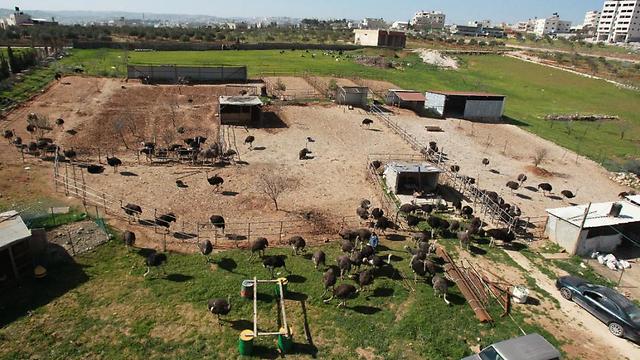 The ostrich farm is one of a growing number of ventures in Palestinian agriculture (Photo: AFP)

Confident his business will grow, Abu Tir is negotiating with the Palestinian agriculture ministry to expand the farm.

Palestinian agriculture has been suffering, with its share of GDP dropping from 77 percent 20 years ago to just five percent today - largely because of Israel's control of areas of the West Bank through settlements and accompanying restrictions on access for Palestinian farmers.

It is unclear to what extent ostrich farming can help a revival, but another venture in Jericho in the Jordan Valley is making inroads.

A group of young Palestinians are growing and selling the "first 100 percent Palestinian mushroom", with packets appearing in supermarkets in the Palestinian administrative center in Ramallah.

Four young Palestinian high-tech workers – Mahmud Kahil, Samir Khreisheh, Tayeb Aql and Wadie Nassar – quit their jobs so they could pursue the "Amoro" project, named after the type of mushroom they grow.

Based since October at a farm in Jericho, they now produce some four or five tonnes of mushrooms every month, which sell at an average of $2 for 250 grams, against $2.50 for Israeli mushrooms.

"Ramallah itself consumes 2.5 to 3 tonnes of mushrooms each month," Kahil said.

"The goal is to sell 15 tonnes per month," eventually expanding sales to the Gaza Strip and neighboring countries, he said.