According to the survey, which was conducted by telephone among the representative sample of 500 Jewish and 200 Arab respondents aged 18 and over, if the elections were held today the Likud would get 27 seats and the Zionist Union would get 23. The poll had a four percent margin of error. 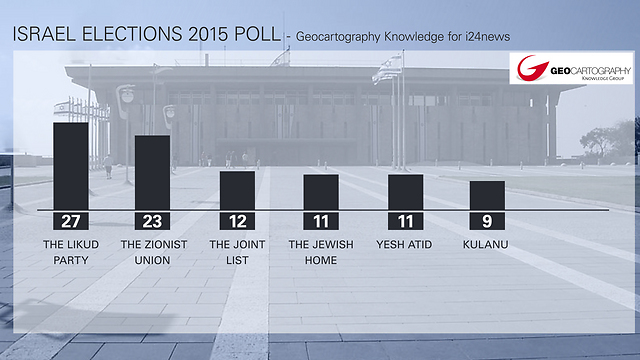 The results stand in contradiction those of other recent polls, which has the two parties tied in a dead heat, or even put the Zionist Union ahead of Netanyahu.

Two prominent parties who were running the risk of not passing Israel's newly instated 4 percent election threshold were the left wing Meretz and religious right wing Shas, which for the first time was overtaken by Yahad (Together) party – a Shas offshoot led by former Shas leader Eli Yishai – which was polling at 5. 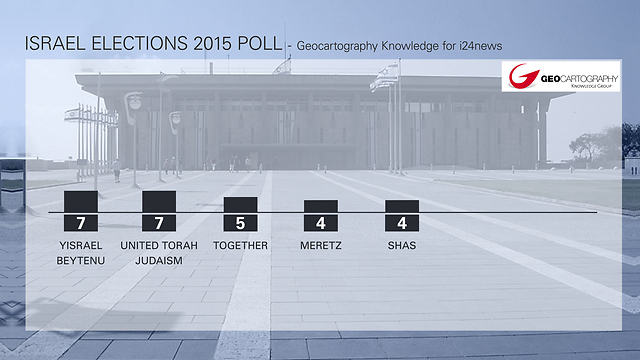 Naftali Bennett's Bayit Yehudi party, which aspires to establish itself as the third largest -- and to make its leader a viable future candidate for prime minister -- came in with a mere 11 seats, much lower than initial polls.

Moshe Kahlon's Kulanu party was on the rise, riding on its social welfare platform, with 9 Knesset seats. Yet its main rival for centrist voters, Yair Lapid's Yesh Atid party, was polling at a much higher 11.

Yisrael Beytenu, led by Foreign Minister Avigdor Lieberman, was polling at 7, slightly higher than in recent polls, which saw it scratch the elections threshold -- which, ironically, the party itself put on the books during the previous government.

The ultra-Orthodox United Torah Judaism party is doubtlessly enjoying the slump of rival Shas, once more under Aryeh Deri's stewardship, though it enjoys a solid and loyal base of ultra-Orthodox voters.

According to Prof. Avi Degani, head of the Geocartography institute which led the poll, the Likud's popularity does not seem compromised by the recent string of scandals in which Netanyahu and his party are embroiled, including the ongoing saga regarding Sarah Netanyahu's allegedly exorbitant expenses.

Prof. Degani attributed Netanyahu's lead to the loyalty of his core supporters, the traditional Likud voters who aren't overly impressed with the wave of criticism directed at the leader. On the other hand, Netanyahu's chief rival Isaac Herzog is faltering, as the leader of the Zionist Union is facing allegations that he's lacking in charisma and perhaps even unfit to be at the helm of the country at this trying period. Tzipi Livni's lack of popularity represents another problem for the Zionist Union, with some arguing the party would be better off without her, and the results of the poll, where the party garnered 23 seats, bear this out.