Protests in southern Israel were gathering steam Monday following the announcement that a chemicals plant in the Negev is beginning a massive round of lay-offs.

Thousands of people in southern Israel have gone on strike over the move by the Bromine Compounds factory, which is owned by the Israel Chemicals conglomerate and a major employer in the Negev.

Two weeks ago, Bromine Compound announced that more than 140 people would be laid off. Many local residents who had been working at the company for years found themselves not knowing how they would find another source of employment in the area. 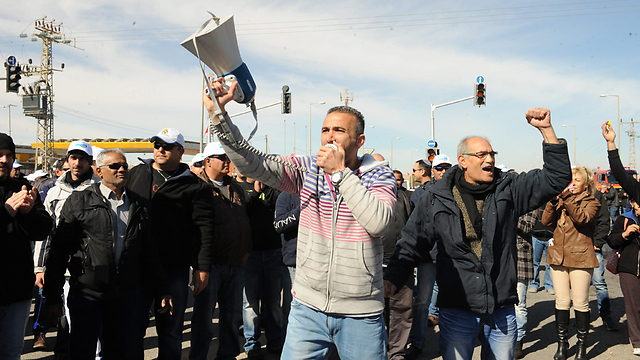 Israel Chemicals workers strike in south. (Photo: Herzel Yosef)
On Sunday, workers in Dimona held a strike to protest the wave of dismissals and on Monday workers in Arad also joined the action. On Tuesday, a strike will also be held in Be'er Sheva, considered to be the capital of the Negev. Between the hours of 9 am and 12 pm on Tuesday, thousands of workers from the Israel Chemicals Dead Sea Works Factory and Bromine Compound will show their solidarity for those who are now facing joblessness. Be'er Sheva municipality workers, along with various workers of local factories will also join in to show their support of the strike, which will be held near the city's municipality offices. Municipality services are scheduled to be limited during the hours of the protest. The municipality's emergency phone line will deal with urgent matters. The strike will make its way to Be'er Sheva after the workers who were laid off held a strike in Arad on Monday. The laid-off workers blocked the main square in the city as a protest against the dire employment situation in the south,  and waved their letters of dismissal. 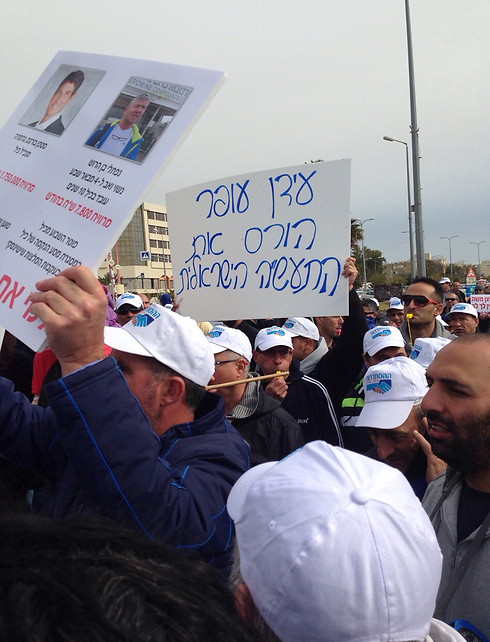 Mika Ben-Naim, 44, a Bromine Compounds factory worker, said that the strike was part of a nationwide protest against the wave of lay-offs.

"The management said that the lay-offs that are happening now are just the first part," said Ben-Naim. "We won't get wages this month and who knows what will happen next month. People have no idea how they will be able to prepare for Passover. About 20,000 people are directly employed by Israel Chemicals and the move also affects business owners in the south, who say people are spending less at the moment."

Ben-Naim added: "Our struggle is shared in northern Israel and the rest of the factories belonging to the Israel Corp., which is under the control of Israel Chemicals. The workers in the north are standing with us during the protests because they are also frightened of being laid off. I didn't get a dismissal letter this time, but I'm scared I'll be part of the next round. There should be no lay-offs." "Our message is that we will continue this struggle against our conditions and for the right to make a decent living," said Avi, another protestor. "The management wants to fire workers when it earns billions? What for?"

Meanwhile, the frustration mounted as another 10 workers from the Dead Sea Works Factory woke up to find a summons for a pre-dismissal hearing placed at their front doors.

"Just like thieves in the middle of the night. This is how the management of Israel Chemicals displays its contempt for the workers and the workers' families," said Armond Lankeri, the chairman of the Dead Sea Works employees' union.

"It's the management that is scared," he said. "This marks a new low in the crisis and only increases the struggle. It will not break the spirit of the workers in the south."

Employee Maxim Dahan said that his 12-year-old son found the summons for a pre-dismissal hearing for his father taped to the front door of their home. Dahan, a father of three and the sole breadwinner, has been working for the company since 1996. 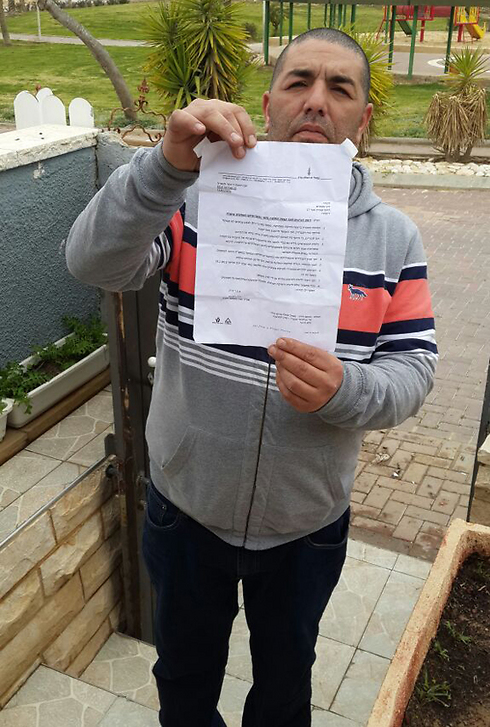 Maxim Dahan, father of three, holds up his dismissal letter.
"My son suggested that we skip the celebration for his bar mitzvah," said Dahan. "It's a feeling that is hard to describe, especially after I have dedicated myself to working at the factory for 19 years, ever since I was released from the army."

Israel Chemicals said in response: "Unfortunately, the Histadrut labor union is trying to impose on the country and the companies in the industry a model of employment for life, without an option for lay-offs, even at a factory that is operating at a loss.

"In the last few days, we've seen how a legitimate dispute between workers and management has become a political strike with political goals. We saw workers being taken advantage of by politicians, political parties and organizations with party affiliations. The management promises that it will continue to operate responsibly towards the factory and its workers, and for those ending their employment at the factory we will offer a benefits package that is among the best in Israel."