Zionist Union leader Isaac Herzog announced Tuesday he will not be traveling to the US to appear before the American Israel Public Affairs Committee (AIPAC) annual conference, amid growing tensions over Prime Minister Benjamin Netanyahu's planned speech to Congress on March 3.

"Netanyahu's spin about who is going to Washington must stop," Herzog told a gathering of foreign media in Israel. "My firm position against a nuclear Iran is known by every Israeli and American, including the US president, and I know how to voice it in a sharp, clear manner - from here, not from there."

Herzog added: "A few days ago, I told the AIPAC conference organizers that I was deeply sorry, but that I could not attend the conference at which I had been invited to deliver a speech. American Jewry is very important to me, but it is clear that replacing the Netanyahu government is just as important, and that is my primary mission these days. When I'm prime minister, I will travel anywhere in order to uphold the security interests of the citizens of the State of Israel." 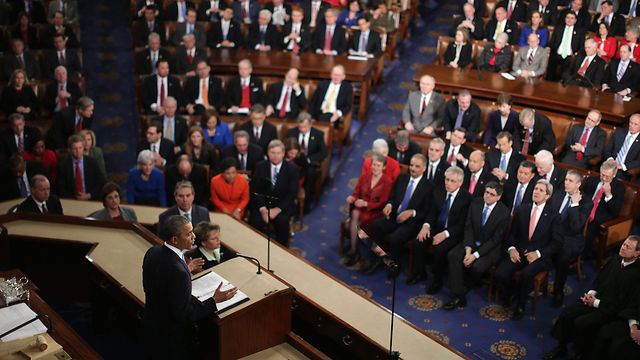 "The situation in which Israel learns about an agreement that deals directly with Israel's security and the safety of its residents from foreign news agencies is a new and dangerous low in our relations with the US," she said. This was a "result of the rift Netanyahu caused due to his insistence on speaking before Congress," Yacimovich said, following recent reports about progress in the Iran nuclear talks.

"The question is not about who will go to Congress, but whether the visit to Congress should be made, and the answer is a resounding no," Yacimovich added. "The prime minister should be reminded that the reason for the trip is preventing Iran from obtaining a nuclear weapon, not an election speech. The trip to Congress is an electioneering trip, for the purpose of a speech that will be broadcast in Israel."

"In his stubbornness," the MK added, "Netanyahu is causing irreversible damage to the country. He must remember that this isn't a reality show with Moshik Galamin, not an electioneering video or more material for an elections spin – but rather the future of the country."

Likud MK Miri Regev responded to the claims, saying: "The left-wing and Herzog should support and back the prime minister, and understand that the country's security is not a political issue, but rather is an existential issue for the State of Israel. I want to strengthen the prime minister for his activities and determination to highlight the dangers of a nuclear Iran."