'Government is turning the separation between us and the Palestinians from difficult to impossible'
Photo: Alex Kolomoisky

Post-Zionist government leading us to a binational state

Op-ed: The Netanyahu governments, even when they include Labor and Yesh Atid members, are disassembling the Zionist project of the 'Jewish and democratic' state.

While the media devote their time to Sara Netanyahu's Photoshopped pictures, things are happening on the ground. That's how it is: For those who are determining our future, it's business as usual.

During the third Netanyahu government's term, with Yair Lapid as the person allegedly in charge of the money, with Uri Ariel as housing minister and Nissan Slomiansky as chairman of the Finance Committee, there was a 40% increase in housing starts in the territories.

Many of these housing starts (perhaps most) are outside the settlement blocs, and some are in isolated settlements, whose main goal is to prevent any possibility of territorial continuity on lands which have theoretically been allotted to the Palestinian state (a state which Prime Minister Benjamin Netanyahu theoretically supports). These are not words, these are actions.

These actions, which are much less interesting than whether Isaac Herzog has the voice of a leader, are determining our future. The "one more dunam and one more goat" method, which was used in the past for a state's establishment, is as efficient as ever. This time we are not talking about a Jewish state, but about the binational state which is taking shape. 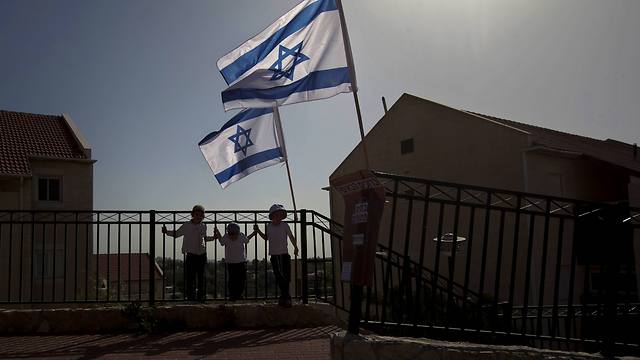 According to the world view of Netanyahu and his partners in Judea and Samaria, territory comes first, followed by the Jewish majority, and democracy comes last (Photo: AP)

The Netanyahu governments (even when they included members of the Labor Party and Yesh Atid) are post-Zionist governments which are disassembling the Zionist project of the "Jewish and democratic" state. No one is declaring it (the opposite is being declared), but it's happening on the ground: Anyone who takes a look at the map of the West Bank territories realizes that the State of Israel has intentionally created on them a network of communities, which the only logic that can be found in them is turning the separation between us and the Palestinians from a difficult task into an impossible one.

This plan is not phrased in messianic terms. It is phrased in the boring terms of master plans and housing units and infrastructure. But the Zionist project – which sees territory as a tool for the main thing, which is creating a state with a solid Jewish majority which sustains democratic institutions – is no longer behind it.

According to the world view of Netanyahu and his partners in Judea and Samaria, territory comes first, followed by the Jewish majority, and democracy comes last. This is messianism which has exchanged the festive language of Rabbi Kook with the bureaucratic language of the Israel Land Administration.

But it is based, like its fiery predecessor, on expectations for a divine intervention. First we'll take over the land, quietly, using security and administrative language, under incessant protests against some primeval injustice suffered by the Jews which requires a territorial amendment. Then we'll find ourselves in a de facto binational state.

From some aspects, this has already happened: Israel controls masses of Palestinians who have neither national rights, nor civil rights, nor human rights. But in the meantime, we are convincing ourselves that it's reversible. When it turns out that this situation is irreversible, the Palestinian Authority will collapse. When the PA disappears, it will be difficult being without democracy and feeling as if we still have one. What will happen when we are required to explain why we continue to revoke the civil rights of a huge minority?

According to the plan, miracles will happen even after this declaration: First of all, the Palestinians will swallow this bitter pill too, and if they don't swallow it willingly – they will swallow it forcibly. Second, the Western countries will also swallow it. These countries, which see human rights are the cornerstone of their existence, will accept the newly established settlers' state as a distinguished member of the democratic club and agree to advance shared interests together.

And what if these miracles don't happen? That's when our secret weapon will be pulled out: Uprightness. We will head towards abyss, but with our head held high. Thank you, Prime Minister Netanyahu and Housing Minister Ariel – if not for the miracles, than for the uprightness.