Palestinian activists enforce Israel boycott: 'You have 48 hours to get rid of Israeli products'

Heads of Palestinian campaign to boycott Israeli made products in the West Bank begin bullying Palestinian shop owners; Ynet reporter joins activists as they descend on Ramallah to enforce what they call 'a national duty.'

An entourage of about 20 people, among them the leaders of the Palestinian campaign to boycott Israeli products in the West Bank and a number of Fatah officials, made their way through the Palestinian capital of Ramallah, enforcing what they called a "national duty".

The group moved in and out of different stores in Ramallah, embarrassing store owners who had yet to get rid of Israeli made products. Within seconds all products ranging from Tnuva's diary produce, Straus's sweets and goods from Osem and Elite were pulled from the shelves and hidden at the back of shops, as were Prigat and Jafora-Tabori juices.

"I'm with you, since the last war in Gaza I was the first to boycott everything Israeli," says a defiant local grocer, whose shop is located next to Al Jazeera's Ramallah office and still shelves Israeli products. "But who will pay us back for these goods," he asked, one of the few to dare talk back to the activits. "Reimburse me for these products," he demanded. 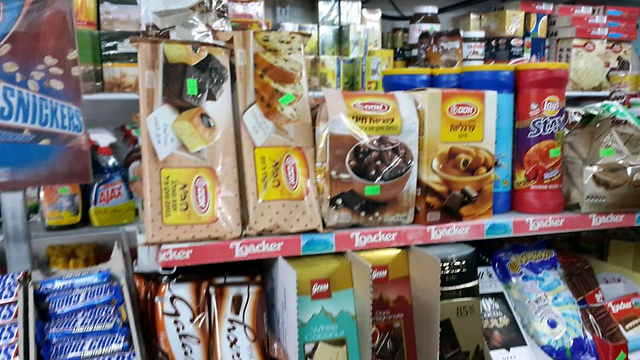 However his protest did little to stop the group, who firmly and unequivocally demanded he remove all such products within 48 hours, all before a crowd of curious and cautious onlookers . It was clear to all that he had understood the meaning of the ultimatum.

Two weeks after first announcing the boycott of products by the five large Israeli corporations, the group has now shifted to field work - enforcing the ban. For the past two weeks, activists have prevented such products from crossing over from Israel.

During the tour on Tuesday, Abdallah Kamyl, one of the campaign's leaders, told Ynet that the move came in response to Israel's decision to freeze tax funds it collects for the PA following the Palestinian decision to turn to the UN Security Council and the International Criminal Court to pursue war crimes charges against Israel. 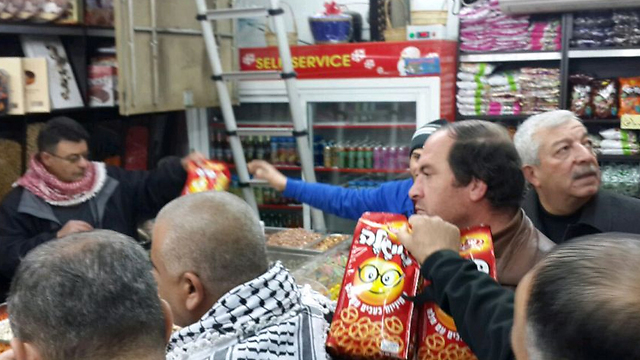 According to him, they would end the ban should Israel return the tax funds. However, it seems no such decision will be reached before Israel's elections on March 17th, and so Kamyl and his men continue with their mission, threatening to escalate it further.

The tour comes at the end of an extended ultimatum the campaign gave local retailers to rid their stock of Israeli products; it was enforced by one of a number of such crews going door to door in the Palestinian capital.

"This is the second phase of the campaign. We will visit businesses and explain to their owners that they are partners in our goal to boycott Israeli products," said Halil Falanh, a member of the boycott committee in the Ramallah district.

Before the tour started he was convinced that all the merchants had complied to the call and none held out, but stressed that they would handle any opposing owners carrying Israeli products pleasantly, not with violence; however, he refused to answer what those "pleasant" methods entail.

The boycott enforcers gathered at a central square in Ramallah before leading a symbolic examination accompanied by Mahmoud al-Aloul, a member of Fatah's leadership council.

In the first store, the inspection passed uneventfully as no Israeli products were found and the store owner breathed a sigh of relief as the mob continued to its next destination.

The next store, which was more like a bodega, was an entirely different story – bags of Osem snacks were spotted on one of the shelves. The shopkeeper stood, smiling with embarrassment. Above him were portraits of Hamas founder Ahmed Yassin and Hezbollah chief Hassan Nasrallah.

"These are the pictures you have in your store and you sell Israeli merchandise?" asked Al-Aloul, who was answered with barely-audible mumbling by the store owner.

The enforcers began removing the snacks of their own accord while the shopkeeper hurried to hide them under the counter, promising they would not return to the shelves.

"These five firms control a significant portion of the Palestinian market but in the near future the boycott will expand to other sectors," claimed Al-Aloul. When asked about the merchants who refuse to participate in the boycott, the Fatah official had only a brief response: "This is a national decision, it will be implemented, and that is what we told them."

The next store entered had no Israeli products and its owner was praised, he responded with flattery: "My store was prepared for your arrival; no Israeli merchandise will enter through here."

"You see?" said one of the boycott's leaders, "Not even one Israeli product."

The next stop was the same market near the offices of Al Jazeera. The owner was frightened as the boycott leaders suddenly squeezed into his small store, especially when he realized he was in a predicament - the shelves were stocked full of Israeli products.

"Did you not receive the manifest calling for the removal of Israeli goods?" asked Al-Aloul.

"I received it but I haven't managed to sell all the groceries," answered the shopkeeper.

But instead of being greeted with a modicum of understanding, he received a threatening dismissal: "I notified you two weeks ago."

The store owner decided against meekly surrendering to the directive and demanded compensation. At that point, a small commotion broke out and the mob, screaming, pummeled into the store until someone took charge of the scene and reminded the rest that journalists were present.

"I call on your nationalism to commit to the decision and get rid of the products within 48 hours," clarified one of the enforcers. The store owner tried to get an answer about compensation, but to no avail.

At the same time, one of the enforcers took out a fresh Tnuva milk carton and waved it over the shopkeeper's head. "We do not want to clash with you. What do you prefer: that we talk or confiscate all these products? Don't force us to come back here in 48 hours to confiscate these goods.

The mob exited the store while the shopkeeper was left helpless inside, knowing he stands to lose thousands of shekels. Outside the store, al-Aloul explained why he would not compensate for the goods.

"Let the supplier who sold him the merchandize compensate him," he said on his way to the next store. "There was a decision and there is no option but to implement it.