In interview with Reuters, Bennett lays out political program, saying: 'Even if the world pressures us, we will not willingly commit suicide.'

Young and ambitious, with a ready smile and a quick wit, Israeli far right leader Naftali Bennett is on a mission to prevent the creation of a Palestinian state.

If, as widely expected, he takes on defense or another key portfolio after next month's election, that mission will take a big step closer to fulfillment, something his critics say could stir conflict and deepen Israel's international isolation. 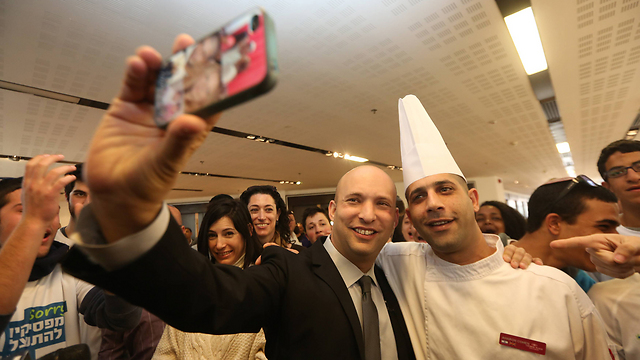 Photo: Gil Yohanan
Forty-two-year-old Bennett, who has expanded the appeal of his pro-settler Bayit Yehudi party to younger, more secular Israelis, is undeterred, saying the alternative would be worse - the end of Israel and endless war. "Even if the world pressures us, we will not willingly commit suicide," the former tech entrepreneur and army commando told Reuters on the campaign trail. Visiting a mall in the Israeli town of Ashkelon and surrounded by a crowd of cheering supporters, Bennett stopped to talk with stall owners eager to shake his hand and chat while teenagers took selfies with him on their mobile phones. 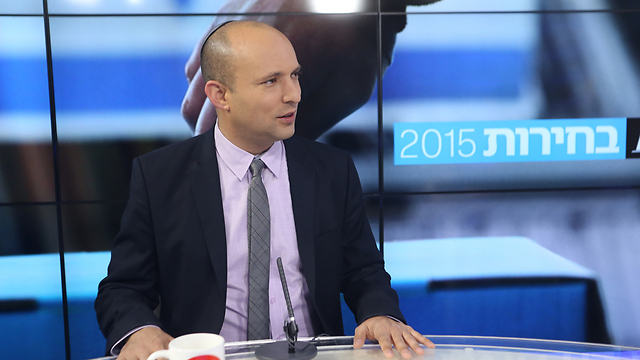 Bennett at Ynet's studio (Photo: Yaron Brenner)
The party is looking to boost its influence in the election on March 17, held early after the Netanyahu fired two centrist ministers, saying he could no longer tolerate their opposition to his policies. Polls predict Bayit Yehudi will hold onto or increase its seats, currently 12, in the 120-member parliament. If Netanyahu's Likud, which has a narrow lead in the polls, comes top again, Bayit Yehudi is likely to be a core part of the next coalition.

A man with a plan: Partial annexation

The Palestinians want to establish a state in the West Bank and East Jerusalem, which have been occupied by Israel since 1967, and in the Gaza Strip, blockaded by Israel and Egypt and under the control of Islamist Hamas.

Bennett cites regional turmoil and Palestinian rocket fire into Israel during last summer's Gaza war as reasons why it must not relinquish the West Bank as it did the Gaza Strip in 2005. Israel, he said, should annex "Area C" of the West Bank, where more than 350,000 Israeli settlers live under full Israeli military and civil control. Under interim peace deals, the Palestinians, whose population stands at around 2.8 million, have limited self-rule in the rest of the West Bank. "The idea is to create an 'autonomy on steroids', for the Palestinians to have their own elections, freedom of movement, build as much as they want, their own education system, pay their own taxes," Bennett said. "I don't want to govern them." Palestinians in Area C, which makes up 60 percent of West Bank territory, would be offered Israeli citizenship, he says. His opponents dismiss his plan as immoral, simplistic and impossible. But Bennett hopes to win the hearts and minds of Israelis and eventually persuade the world that his "Stabilization Plan" is the right way to go. "Will everyone be convinced tomorrow? No. We need to work at it," he said. As far as he is concerned, he has broken a taboo. "Even if the entire world is convinced if we sever Judea and Samaria (the biblical term for the West Bank), give it to the Arabs, carve up Jerusalem, that this will bring peace on earth, I am convinced of the opposite, it will bring endless war." 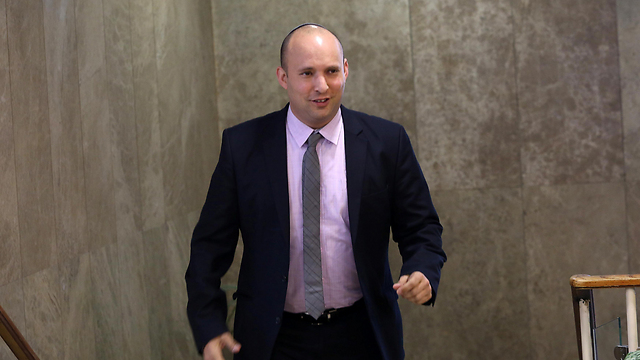 Born in Israel to parents from San Francisco, Bennett spent years in the United States before he sold his anti-fraud software company to US security firm RSA for $145 million.

Addressing an audience of immigrants in Tel Aviv, he quips and jokes, drawing laughter and applause. He speaks in American-accented English, reminiscent of Netanyahu, to whom he was an aide in 2006-2008. Since taking over Bayit Yehudi in 2012, Bennett has sought to revamp the party, bringing in younger faces and expanding its appeal to broader sectors, especially via social media. Bennett, an Orthodox Jew, lives in an affluent suburb of Tel Aviv with his non-religious wife. Critics call him the friendly face of an extremist party that includes hardline settlers and ultra-nationalists strongly opposed to Palestinians. 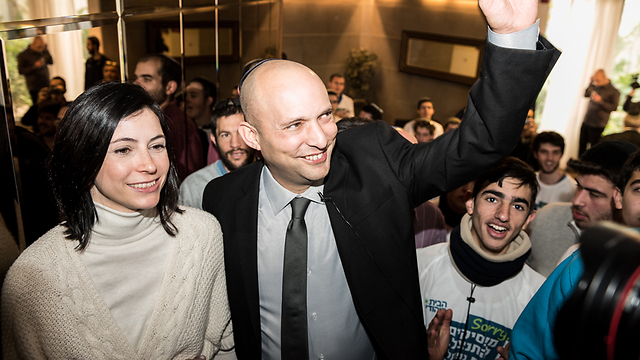 Bennett with wife at Bayit Yehudi event (Photo: Gur Dotan)
In recent weeks, some Bayit Yehudi lawmakers have also drawn criticism for anti-gay remarks, with one quoted as saying he was "a proud homophobe". At the conference in Tel Aviv, Bennett was heckled by gay activists before they were escorted out by bodyguards. "I respect you guys," Bennett said, later explaining his view was "live and let live." He said he never planned to enter politics but Israel's 2006 war against Lebanon's Hezbollah militant group changed his mind. "I had just sold a company for 145 million dollars. I was supposed to be partying, flying off to the Caribbean and instead I found myself fighting in south Lebanon against terrorists who want to destroy my state." That convinced him, he said, to serve his country through political leadership. "I am here as an emissary for the people of Israel."