Iranian FM claims Netanyahu employing 'falsification, propaganda' in attempt to prevent peace, says PM is using planned US speech to 'cover up realities in our region'.

Foreign Minister Mohammad Javad Zarif said the world should not allow the hard-line Israeli leader to undermine peace. He was referring to Netanyahu's planned speech at the US Congress next week on the emerging nuclear deal that he considers dangerous.

"Through scaremongering, falsification, propaganda and creating a false atmosphere even inside other countries, (Israel) is attempting to prevent peace," Zarif told reporters during a joint news conference Saturday with his Italian counterpart, Paolo Gentiloni. "I believe that these attempts are in vain and should not impede reaching a (nuclear) agreement." 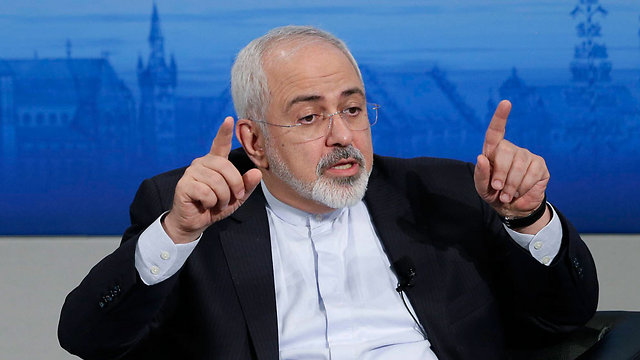 Zarif: "Netanyahu is opposed to any solution (Photo: AP)

In his sharpest criticism yet, Netanyahu said earlier this week that world powers "have given up" on stopping Iran from developing nuclear weapons in ongoing negotiations. Israel views a nuclear-armed Iran as threatening its very existence.

Netanyahu's planned address has further strained his relationship with the Obama administration, as America is a key ally to Israel. Netanyahu's speech in the US also comes ahead of March elections in Israel. "Netanyahu is opposed to any solution and (his planned speech in US Congress) signifies his attempts to use an untrue issue and a fabricated crisis to cover up realities in our region, including the occupation (and) suppression of the Palestinian people, violation of rights of Palestinians and continuation of invasive policies," Zarif said. The West fears Iran could build an atomic bomb with its nuclear program. Iran says its program is for peaceful purposes such as energy production and medical research.

Iran and the US, Russia, China, Britain, France and Germany reached an interim accord in November 2013. Now, negotiators hope to reach a rough draft of a deal on Iran's disputed nuclear program by the end of March and a final agreement by June 30.

Staking out the broad outlines of a deal – without going into specifics – a US official spelled out for AFP where Washington was standing firm: