Netanyahu visits Western Wall ahead of US speech, vows to fight Iran deal

'I respect the US president (but) as prime minister it is my responsibility to look after Israel and therefore we firmly object to the developing deal with Iran,' Prime Minister Netanyahu says on eve of flight to US.

On the eve before he takes off for a highly controversial visit to the US, Prime Minister Benjamin Netanyahu visited the Western Wall (Kotel) and reiterated his rationale for making the visit – stopping a looming nuclear deal with Iran – though White House officials say his visit will do little to that effect.

The prime minister is speaking to Congress at the request of Republicans. His visit was coordinated without the Obama administration's knowledge, deepening tensions between two leaders who have never shown much affection for each other, straining already tense relations between the two nations. 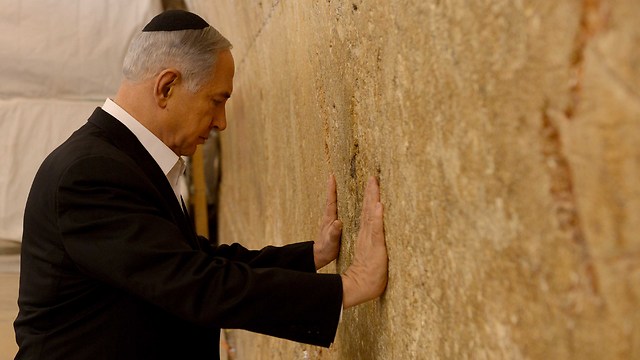 PM Benjamin Netanyahu at Kotel (Photo: Avi Ohayon, GPO)
"On the eve of my flight to the US I wanted to come to the Kotel. This is a chance for me to say that I respect President Barack Obama. I have faith in the strength of the bonds between Israel and the US, and through them we will overcome the disagreements we have and will continue to have. "As prime minister, it is my responsibility to look after Israel and therefore we firmly object to the developing deal (with Iran over its nuclear program) which can threaten our very existence," a defiant Netanyahu said Saturday night. "We must unite in face of such an agreement and give voice to the threats it entails for Israel and the world." The White House said on Friday the United States is hopeful that it can hold together the coalition of countries working toward an agreement with Iran on its nuclear capabilities.

White House spokesman Josh Earnest said the administration does not see Netanyahu's upcoming visit to Washington as bad for the negotiations, and said Netanyahu has “not presented an alternative” to current talks.

For six years, Obama and Netanyahu have been on a collision course over how to halt Iran's nuclear ambitions, a high-stakes endeavor both men see as a centerpiece of their legacies.

The coming weeks will put the relationship between their countries, which otherwise remain stalwart allies, to one of its toughest tests. Netanyahu is bound for Washington for an address to Congress on Tuesday aimed squarely at derailing Obama's cherished bid for a diplomatic deal with Tehran. At the same time, Secretary of State John Kerry and other international negotiators will be in Switzerland for talks with the Iranians, trying for a framework agreement before a late March deadline. In between are Israel's elections March 17, which have heightened the political overtones of Netanyahu's visit to Washington. Jeremy Ben-Ami, president of the liberal Jewish advocacy group J Street, said Netanyahu was "crossing some lines that haven't been crossed before and is putting Israel into the partisan crossfire in a way it has not been before." But the largest pro-Israel lobby in the US, the American Israel Public Affairs Committee, has tried to play down the partisanship. "AIPAC welcomes the prime minister's speech to Congress and we believe that this is a very important address," spokesman Marshall Wittmann said. "We have been actively encouraging senators and representatives to attend and we have received an overwhelmingly positive response from both sides of the aisle." Nearly a dozen Democratic lawmakers plan to sit out Netanyahu's speech, calling it an affront to the president. Stopping Iran from building a nuclear bomb has become a defining challenge for both Obama and Netanyahu, yet one they have approached far differently. For Obama, getting Iran to verifiably prove it is not pursuing nuclear weapons would be a bright spot in a foreign policy arena in which numerous outcomes are uncertain and would validate his early political promise to negotiate with Iran without conditions. Netanyahu considers unacceptable any deal with Iran that doesn't end its nuclear program entirely and opposes the diplomatic pursuit as one that minimizes what he considers an existential threat to Israel. Tehran says its nuclear program is peaceful and exists only to produce energy for civilian use. US and Iranian officials reported progress in the latest talks on a deal that would freeze Tehran's nuclear program for 10 years, but allow it to slowly ramp up in the final years of the accord. Obama has refused to meet Netanyahu during his visit, with the White House citing its policy of not meeting with foreign leaders soon before their elections. Vice President Joe Biden and Kerry will both be out of the country on trips announced only after Netanyahu accepted the Republicans' offer to speak on Capitol Hill. The prime minister is scheduled to speak Monday at AIPAC's annual policy conference. The Obama administration will be represented at the event by UN Ambassador Samantha Power and national security adviser Susan Rice, who criticized Netanyahu's plans to address Congress as "destructive" to the US-Israeli relationship. The Iran dispute has heightened a relationship between the two leaders that has been frosty from the start. They lack any personal chemistry, leaving them with virtually no reservoir of goodwill to get them through their policy disagreements. Within months of taking office, Obama irritated Israel when, in an address to the Arab world, he challenged the legitimacy of Jewish settlements on Palestinian-claimed land and cited the Holocaust as the justification for Israel's existence, not any historical Jewish tie to the land. The White House was furious when Netanyahu's government defied Obama and announced plans to construct new housing units in East Jerusalem while Biden was visiting Israel in 2010. Additional housing plans that year upended US efforts to restart peace talks between the Israelis and Palestinians. The tension between Obama and Netanyahu was laid bare in an unusually public manner during an Oval Office meeting in 2011. In front of a crowd of journalists, the prime minister lectured Obama at length on Israel's history and dismissed the president's conditions for restarting peace talks. Later that year, a microphone caught Obama telling his then-French counterpart in a private conversation that while he may be fed up with Netanyahu, "You are sick of him, but I have to work with him every day." Despite suspecting that Netanyahu was cheering for his rival Mitt Romney in the 2012 presidential campaign, Obama tried to reset relations with the prime minister after his re-election. He made his first trip as president to Israel and the two leaders went to great lengths to put on a happy front, referring to each other by their first names and touring some of the region's holy sites together. The healing period was to be short-lived. Another attempt at Israeli-Palestinian peace talks collapsed. Israeli officials were withering in their criticism of Kerry, who had shepherded the talks, with the country's defense minister calling him "obsessive" and "messianic." The Obama administration returned the favor last summer with its own unusually unsparing criticism of Israel for causing civilian deaths when war broke out in Gaza. The US and Israel have hit rocky patches before. The settlement issue has been a persistent thorn in relations, compounded by profound unhappiness in Washington over Israeli military operations in the Sinai, Iraq and Lebanon during the Ford, Reagan and George H.W. Bush administrations that led those presidents to take or consider direct punitive measures. Yet through it all, the United States has remained Israel's prime benefactor, providing it with $3 billion a year in assistance and defending it from criticism at the United Nations and elsewhere.

"We have brought relations back in the past and we will do it again now because at the end of the day they are based on mutual interests," said Dore Gold, a former Israeli ambassador to the United Nations and informal adviser to Netanyahu.

"The interests of Israel and the US are similar and sometime identical and I think that is what will determine in the end and not feelings of one kind or another."