Zionist Union: Netanyahu is destroying US ties for sake of few votes

Zionist Union leaders lashed out at Prime Minister Benjamin Netanyahu on Sunday for his planned speech to Congress on Tuesday, accusing him of using the Iran crisis to win votes in the upcoming Knesset elections.

The speech, which has been the subject of criticism in Israel and the US, will slam the agreement on Iran's nuclear program currently being drafted by the US and other world powers.

"There is no dispute about the Iranian threat, but the speech will not help and not change anything, but just could cause damage," the party's leader Isaac Herzog said during a studio interview at Ynet. "Netanyahu is destroying (our) American alliance for a few votes at the ballot box."

The party's number two, Tzipi Livni, also weighed in, saying that, "Netanyahu is destroying the relationship with the United States."

The two were accompanied in the studio by Manuel Trajtenberg, a renowned economist and the Zionist Union candidate for finance minister.

Herzog, like former Mossad chief Meir Dagan, told Ynet that no one is disputing the threat posed by a nuclear Iran, but warned that Netanyahu's approach only served to harm Israel's position.

"There is no dispute about the Iranian threat. We are very aware of the threat and know how to handle it," Herzog said.

"The controversy is about the way to do that. The speech will not help nor change anything, but can only cause damage. The world will not listen to him, nor will the negotiators. This is a mistake that Netanyahu is making. The Jewish community in the United States has said, 'do it after the elections.'" 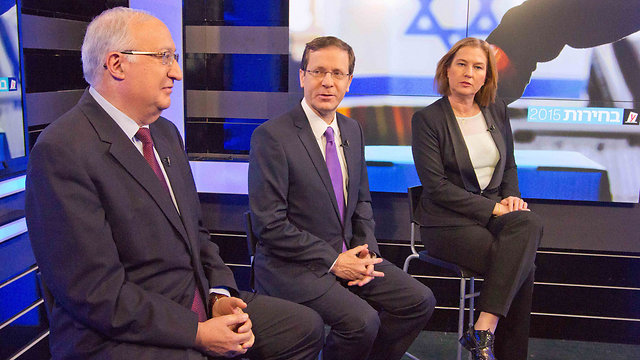 From left: Trajtenberg, Herzog and Livni in the Ynet studio. (Photo: Ido Erez)

Livni also accused the prime minister of using the speech as a way of garnering more votes in the March 17 Israeli elections, which polls show will be a tight race between Zionist Union and Netanyahu's Likud.

"Netanyahu is destroying the relationship with the United States for the sake of a few votes in the polls," she said. "Every Israeli prime minister has to get along with the American president and Netanyahu has destroyed that. He has destroyed the alliance."

The Zionist Union leaders also discussed their economic platform, again lambasting the prime minister for what they said were failed policies.

"I said I'd be taking three steps," said Herzog. "I will implement Trajtenberg's housing program, strengthen the strategic alliance with the United States and try to begin a process to resume dialogue, based on a regional platform. If we have to take certain steps, we will take them."

Trajtenberg maintained that Herzog would give priority to socio-economic issues, currently under the spotlight following a damning report on Israel's housing crisis.

"Finally we will have a prime minister who has raised his banner on socio-economic issues before taking office, and after," said Trajtenberg.

:This is a fundamental change. We will raise households of elderly people over the age of 70 over the current poverty line. Everything is budgeted for, unlike the promises of the other parties, promises that have no budgetary grounding. We have presented a credible and responsible plan that (our) prime minister will lead, and otherwise it will not happen."

Livni, meanwhile, vowed to end the current international wave of antipathy towards Israel, saying that the party would fix the currently tense ties with key ally the US.

"At the moment this world and Abu Mazen (Mahmoud Abbas) are against the Israel of Netanyahu," Livni said. "As soon as we are elected, we will change that. We will end the isolation, and it will be Israel and the world against Hamas."

Livni stressed that a Zionist Union-led government would prevent the transfer of money to isolated settlements, and Herzog pointed out that, "In 2009 to 2011, the settlements were budgeted for NIS 10 billion."

Regarding the conflict between political blocs, Herzog said: "We have not attacked (Yesh Atid leader) Yair Lapid, we are only saying one thing – anyone wants to replace Netanyahu and anyone who wants to end the Netanyahu government must support me, support us."